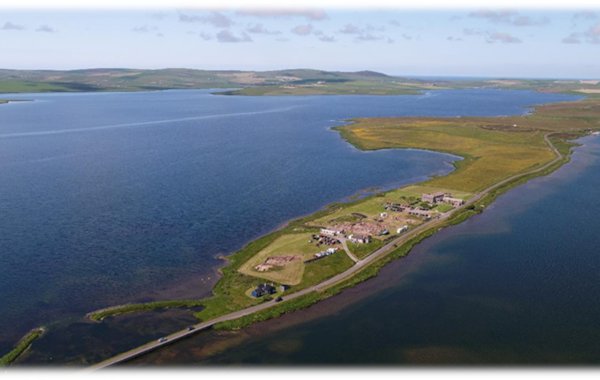 Evidence of a woven Neolithic textile from 5,000 years ago has been confirmed at the University of the Highlands and Islands Archaeology Institute research excavation at the Ness of Brodgar.

Archaeologists at the site in Orkney don't physically have a piece of 5,000-year-old fabric, but the impression it leaves when pressed against the wet clay of a pot.

The new discoveries have come to light during a project started in 2019 at the Archaeology Institute of the University of the Highlands and Islands by Jan Blatchford and Roy Towers to closely examine impressions left on the surfaces of sherds of Grooved Ware pottery unearthed at the Ness.

The project uses Reflectance Transformation Imaging (RTI) - a technique that uses a photographic rig to take multiple photos of a subject, each with a differently angled light source. These pictures are combined, using computer software, to create a highly detailed digital image of the surface of an object that can be examined from all angles and enlargements and examined on screen. The results reveal surface details not visible during normal examination.

The evidence for textiles

Organic material from prehistory does not survive often unless in very specific oxygen-free conditions in the archaeological record, so the study of Neolithic textiles has to rely on secondary evidence.

To date, there is only one other piece of evidence suggesting the use of woven textiles in Neolithic Scotland - another clay imprint discovered in 1966 in Dumfries and Galloway.

In this case, two co-joining sherds carry the imprint of a woven cloth. The impressions appear on the inner face of the vessel, suggesting they were made by the potter's clothing during the pot's creation.

These were first discovered by one of the Ness post-excavation volunteers, Lorraine Clay, who noted a clear impressed cord. She showed the sherds initially to Jan Blatchford and then Emma Smith, a regular at the Ness and a textile analysist and conservation specialist.

Dr Susanna Harris, an expert in European prehistoric textiles, was able to give a second opinion on the RTI confirming the identification. This impression of a piece of Z-ply cord, around 4cm long and 3mm in diameter, is so clear it is possible to see the individual fibres. Although the possibility of an additional textile impression was noted by Emma on initial viewing of the sherd, the ability to view the sherd under RTI has allowed this to be confirmed.

The imprint appears to show finely woven cloth, but the impression is less defined than the cord, meaning details of the weaving technique used is difficult to ascertain - although the yarn used was probably plant-based, possibly flax. 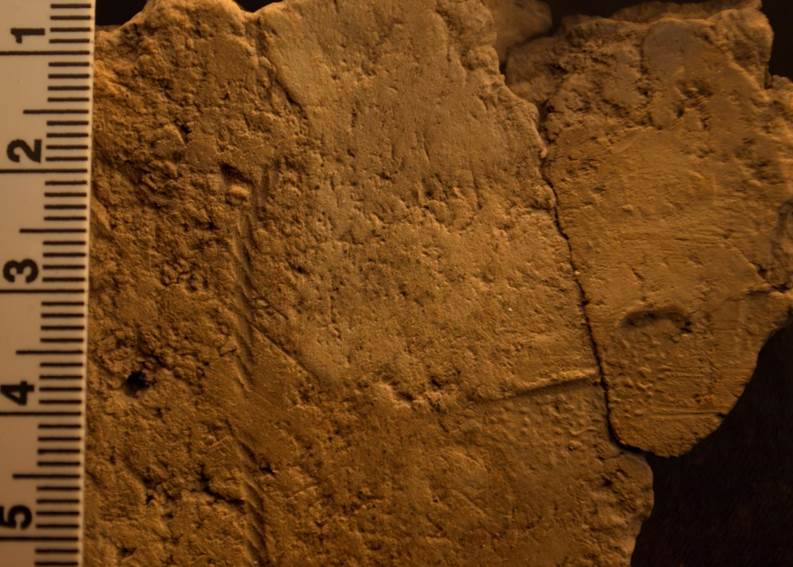 The cord, with the textile shown to the right

Within Neolithic Scotland textile finds are incredibly rare, and no other examples on Orkney. Ness of Brodgar Site Director Nick Card said: ”There is no evidence of textile tools available in Neolithic Orkney, suggesting textiles were made by hand, or using tools made with organic materials that have not survived in the archaeological record. This lack of material culture around textile production can help us to infer what techniques they may have been using.

"The project is also revealing rare basketry and other cord impressions. A growing number of base sherds from the Ness have impressions of coiled mats used in the construction of clay vessels. These match examples found at Barnhouse and Rinyo in Orkney and also at Forest Road in Aberdeenshire. All specimens suggest fibre mats of spiral construction that may have eased the turning of the pot as it was formed and even facilitated its transportation whilst it was dried and then fired.” 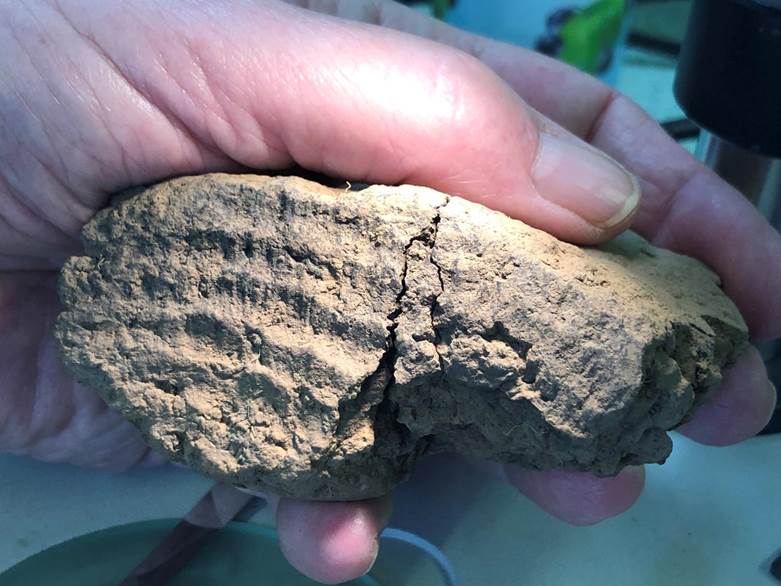 Basketry impression on the base of the pot

Some body sherds have plied cord impressions on their exterior surfaces. Short lengths of plied cord impressions, known as ‘maggots’, are often used as a decoration on some Neolithic pots but the irregular and unevenly impressed nature of the markings on the Ness examples may indicate that the marks are accidental. It may be that the pot was held in some form of basket whilst the clay was still wet.

Further examination of the ‘maggots’ is ongoing. Cordage and textiles would have been essential in prehistory, facilitating essential survival activities such as hunting, fishing, foraging, storage, cooking and providing warm clothing, matting and bedding. The incredible survival of organic remains at the Bronze Age site of Must Farm, Cambridgeshire, highlights the prevalence and complexity of fibre technology in British prehistory.

Work continues to document and interpret these impressions, which, it is hoped, will provide an invaluable insight into the fibre technology of the Neolithic.

(Images copyright UHI Archaeology Institute with the exception of the aerial image, which is copyright Dr Scott Pike)