Lessons that can be learned about climate action from a multi-period crofthouse site, a medieval friary and a coastal settlement occupied from around 800 BC have been captured by three artists as part of a national campaign.

The artworks were commissioned by the Dig It! project to mark the end of their Scotland Digs 2022 campaign which celebrated the archaeological activity that took place across the country this summer. This year’s campaign featured a Climate Action Archaeology theme to draw attention to archaeology’s relationship to the climate crisis.

In July, members of the public joined Archaeology Shetland for a free fieldwork session to test pit and record the remains of the post-medieval crofthouse of Sotersta.

GET A 2023 HISTORIC MAPS CALENDAR FREE WHEN YOU JOIN HISTORY SCOTLAND TODAY! CLICK HERE FOR THIS UK OFFER...

They unearthed Iron Age or Late Bronze Age pottery and recorded elements such as an early Norse building style and large, dressed stones which are uncommon in crofthouses. Their work revealed that the site may have been continuously occupied and modified from as early as 1,000 BC until about the end of the 19th century.

Artist printmaker Suzie Mackenzie, based in East Sutherland, combined elements of the site including the landscape and dressed stone fireplace lintel for her artwork. She used recycled materials including foil, plastic and brown paper to construct the printmaking plate which was built up in layers to reflect the way the site and materials had been reused.

As part of a revised Community Burgh Survey in Inverkeithing, members of the public also helped excavate the gardens at the site of a 14th-century Franciscan Friary in Fife. Finds included medieval pottery fragments, as well as oyster shells, some of which may have been used to fill gaps in the walls over the centuries and some of which had holes suggesting that they may have been hung or had decorative uses.

Illustrator and comic maker Aimee Lockwood, who is based in Caithness, focused on the construction of the buildings and how the site has been used over the centuries. Her work depicts the variety of textures in the stonework and emphasises the oyster shells and the site’s proximity to the harbour. 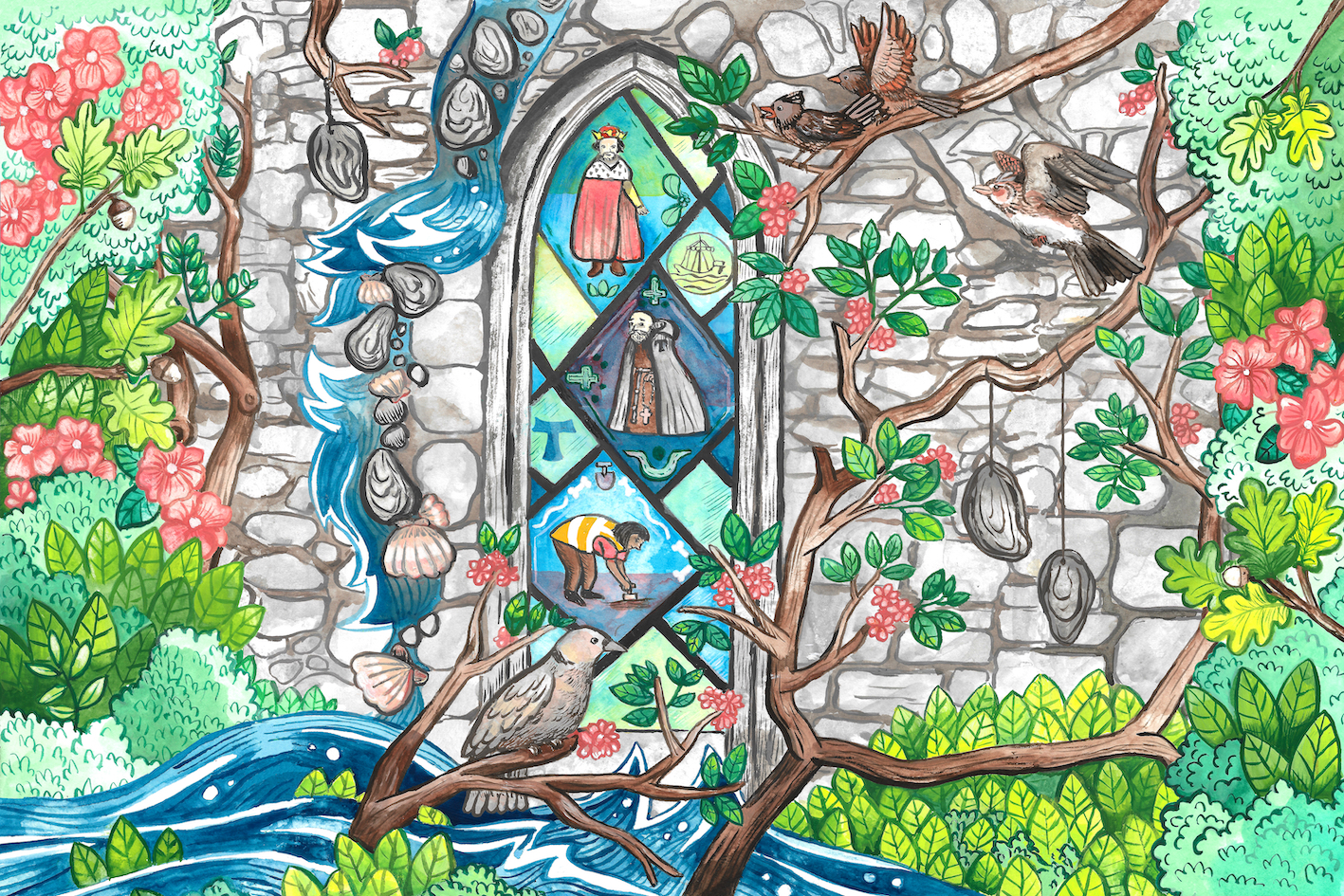 An illustrator and comic maker reflected on the relationship between climate action and the historic use of local natural materials uncovered through archaeological fieldwork during Dig It!'s Scotland Digs 2022 campaign © Aimee Lockwood 2022

The Swandro-Orkney Coastal Archaeology Trust also returned to the Knowe of Swandro excavation on Rousay with the University of Bradford. The site, which includes a large settlement occupied from around 800 BC to AD 1,200 and evidence of an even earlier monument beneath it, is being destroyed by coastal erosion exacerbated by climate change.

Thanks to funding from individuals and institutions including Historic Environment Scotland and Orkney Islands Council, archaeologists and volunteers were able to unearth a Roman coin, rare Iron Age glass toggle beads, a furnace, evidence of metal- and possibly glass-making, and textile-working artefacts such as spindle whorls, needles and a decorated weaving comb.

Renuka Ramanujam, an Oban-based multidisciplinary artist and designer who specialises in printmaking and textiles, was drawn to aerial images of Swandro. She wanted to capture the encroaching ocean and its effect on the site while highlighting that the erosion has been sped up by human impact which is shown in the hands pulling the blanket of water over the excavation. 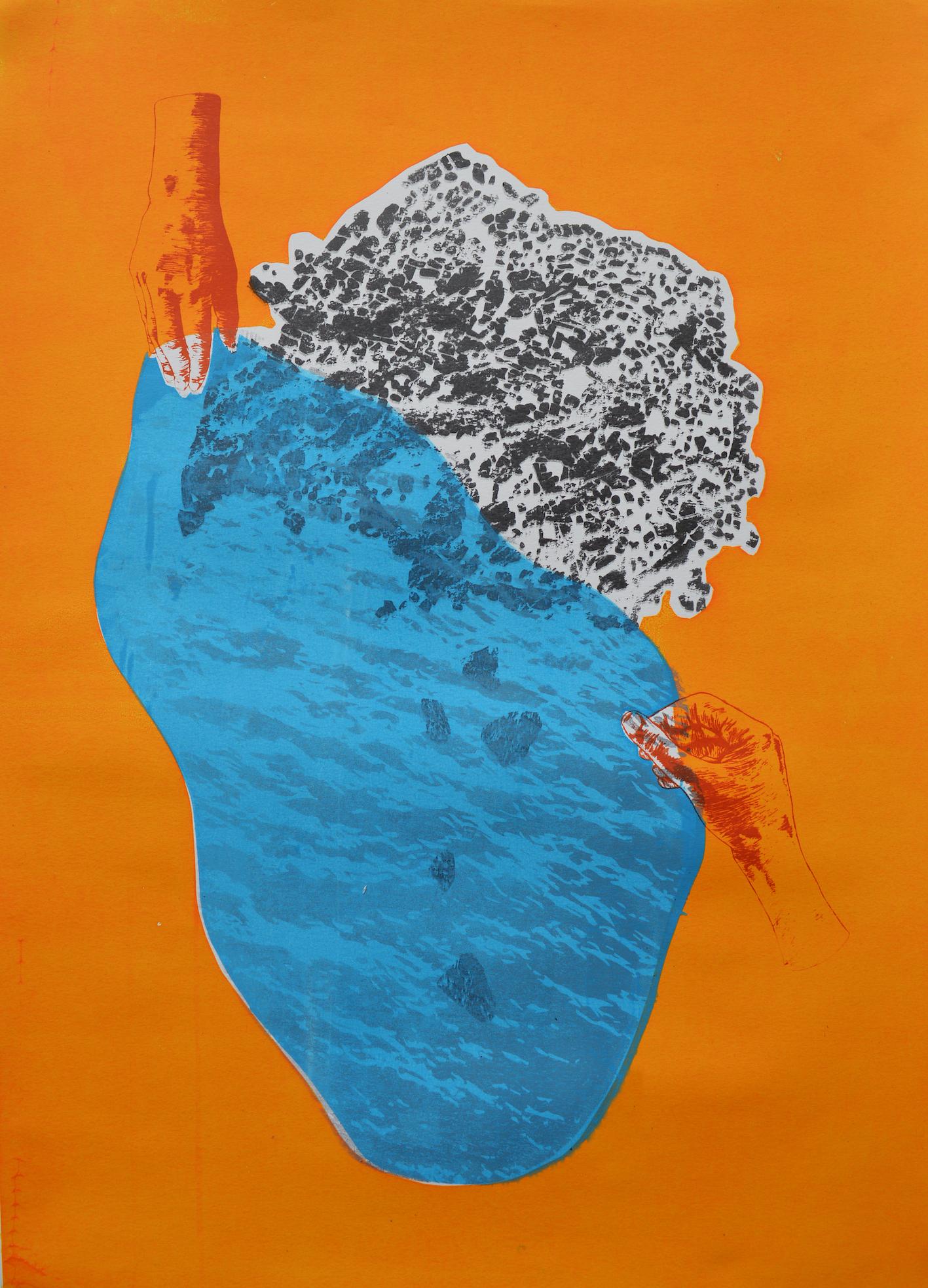 Dr Jeff Sanders FSAScot, Project Manager at the Society of Antiquaries of Scotland’s Dig It! project, said: “We’ve seen a summer of discovery that celebrates both the amazing depth of Scotland’s past and the array of organisations and individuals bringing that story to life through archaeology in the Year of Stories 2022. They’ve also inspired a range of talented artists who’ve captured the long-standing relationship between people and the climate, while empowering us by drawing on the past to encourage meaningful collective and corporate action.”