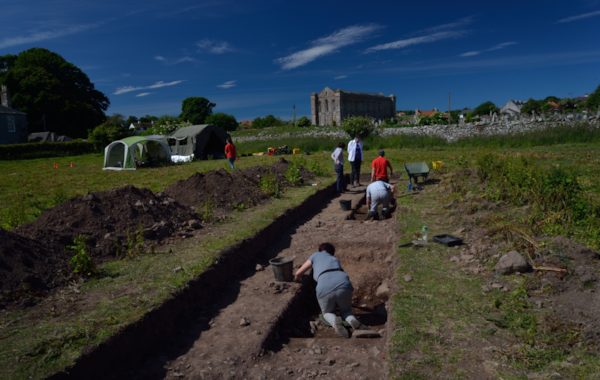 A team of archaeologists who have been working on a project to locate the medieval remains of Coldingham monastery in Berwickshire have revealed the results of their first set of radiocarbon dates.

A team of archaeologists who have been working on a project to locate the medieval remains of Coldingham priory in Berwickshire have revealed the results of their first set of radiocarbon dates.

The search began in summer 2018, as DigVentures archaeologists attempted to discover the location of an ancient monastery established 1,400 years ago by Princess Aebbe, the sister of King Oswald of Northumbria. Coldingham monastery, along with Oswald's monastery at Lindisfarne, were influential in the spread of early medieval Christianity.

However, whilst Lindisfarne is a world-renowned visitor attraction, the location of Coldingham monastery had been forgotten after it was burnt down in the 7th century AD. Now, excavations led by DigVentures have found traces of a vast, but narrow circular ditch, which is likely to be the ‘vallum’, the boundary surrounding Aebbe’s religious settlement.

What was discovered at the site?

During the excavation, hundreds of pieces of butchered animal bone, including cattle, horse pig, sheep/goat, domestic fowl and red deer were recovered. The animal bone spreads represent the disposal of carcasses after processing with the high value joints of meat consumed elsewhere within the complex. Its inhabitants were eating well!

A piece of animal tooth was sent to the lab for radiocarbon dating, and the results came back as between 664 – 864 AD, indicating that the pile of bone is Anglo-Saxon in date. DigVentures explain this means they can now 'confidently say that substantial activity was taking place right in the centre of Coldingham at the time that Aebbe’s monastery existed', as Manda Forcer of DigVentures explains: 'The section of boundary ditch we found links up with two other ditch sections, and together they seem to encircle Coldingham Priory, meaning that the heart of Aebbe’s monastery is somewhere underneath it.

'In the area just outside the boundary, where small-scale industries like metalworking or pottery production would usually have taken place, the team also uncovered a huge pile of butchered animal bones which radiocarbon dating has just confirmed date to AD 660 – 860.

'This is pretty much exactly when Aebbe’s monastery was in existence. Originally built around AD 640, it is said to have burned down shortly after her death, but was then rebuilt and thrived until it was destroyed once again by Viking raiders 200 years late.'

Previous attempts to locate Coldingham monastery had focused on the clifftop, but no hard evidence was ever found, leaving archaeologists to focus their search further inland. After the DigVentures team settled upon a possible area of interest, members of the public were invited to study maps and descriptions of the local area before suggesting the precise site for the dig. After more than 700 votes, the decision was made and four different trenches were dug.

There had been several earlier archaeological clues from smaller excavations in the immediate vicinity, including early Christian burials, pieces of an Anglo-Saxon belt fitting, and fragments of sculpture. But it’s only now, after a larger excavation complete with fresh radiocarbon dates, that the bigger picture can be clearly seen – including the ditch.

Manda explains the importance of the latest results: 'We collaborated with the public on choosing where to dig, and they made a very smart decision, shunning some of the more glamorous suggestions we put forward in favour of a big, dark splodge on the map. We might not have excavated that particular spot if it hadn’t been their top choice, but it turned out that this is where we found the material that allowed us to get a very secure radiocarbon date.

'It is brilliant to finally be able to announce that we’ve found Aebbe’s monastery, and to confirm that part of it is probably underneath Coldingham Priory. Aebbe is an extraordinary figure – an example of a powerful Anglo Saxon woman who played a big part in establishing Christianity in the region during the 7th century. Now that we’ve got evidence to pinpoint exactly where her monastery was, we can help bring her story back to life.'

The excavation was crowdfunded by DigVentures, with support from the National Lottery Heritage Fund and Friends of Coldingham Priory. You can read more about the discoveries at digventures.com