Three-dimensional images of Burghead in Moray have been created based on archaeological excavations by the University of Aberdeen.

Funded by Historic Environment Scotland as part of a wider video project to enable the public to learn more about Scotland’s Pictish past, the images showcase the enormous defensive ramparts, which were once thought to be eight metres thick and six metres high, as well as dwellings within the fort.

It has long been known that Burghead was home to a Pictish settlement but it was thought that the 19th-century development of the modern town had eroded most traces of this period of its history.

The landward ramparts were levelled and part of the seaward defences was destroyed in order to build the modern harbour.

More than 30 Pictish carved stones were discovered during this destruction of the fort but just six carved bulls have survived, along with a number of fragments of early Christian sculpture. When University of Aberdeen archaeologists first began excavations there in 2015, they expected little to have survived such extensive building work close by.

But over the last five years, a very different picture has emerged and the digs, led by the University’s Professor Gordon Noble, and funded by both Historic Environment Scotland and the Leverhulme Trust, have yielded some of the most significant Pictish items and building remains ever uncovered.

It is this work which has enabled such a detailed reconstruction of how the site may have looked. 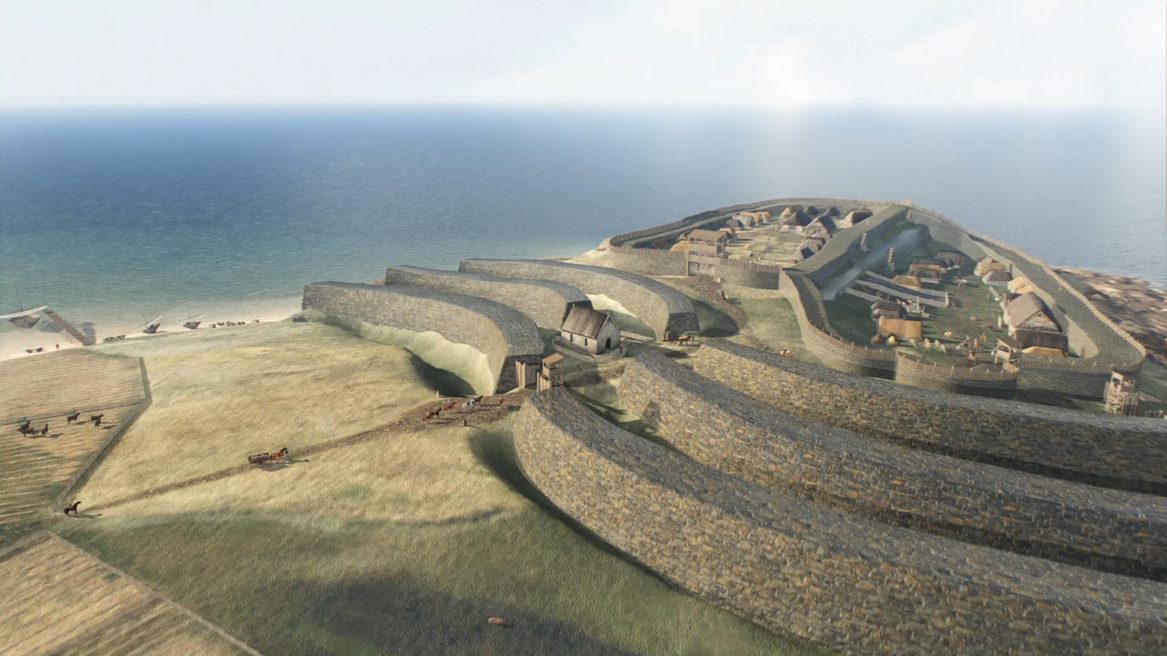 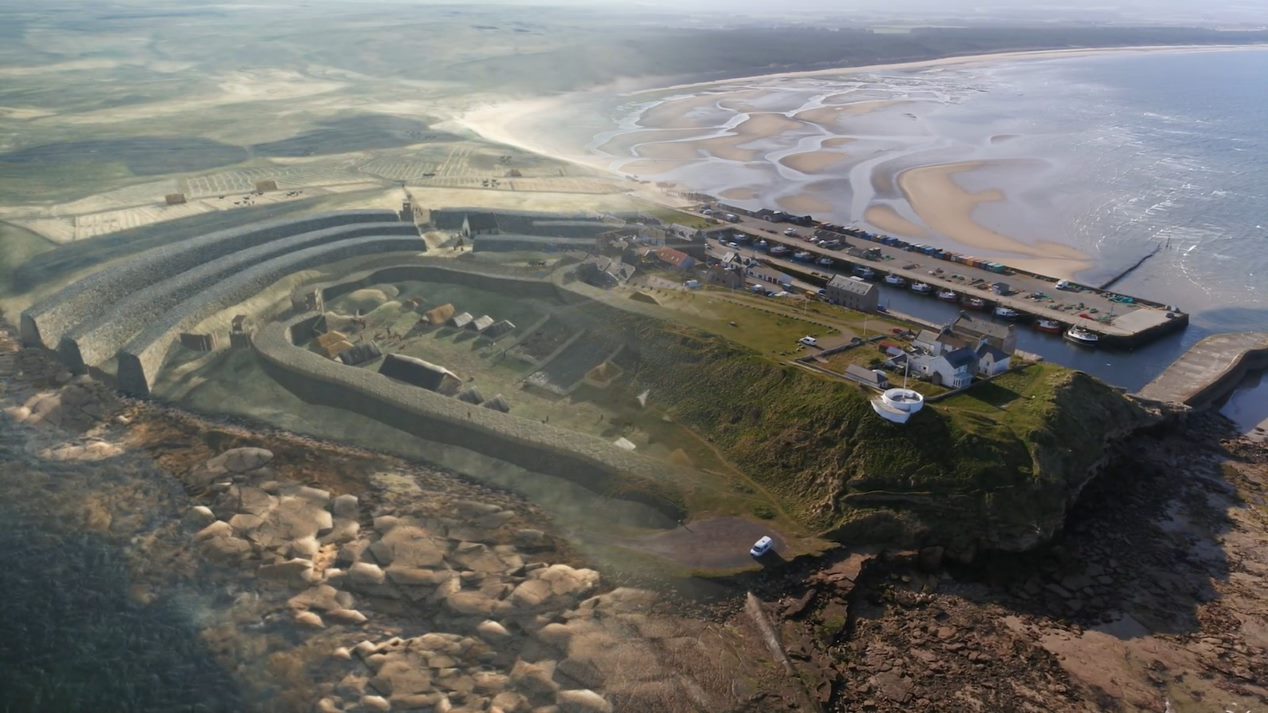 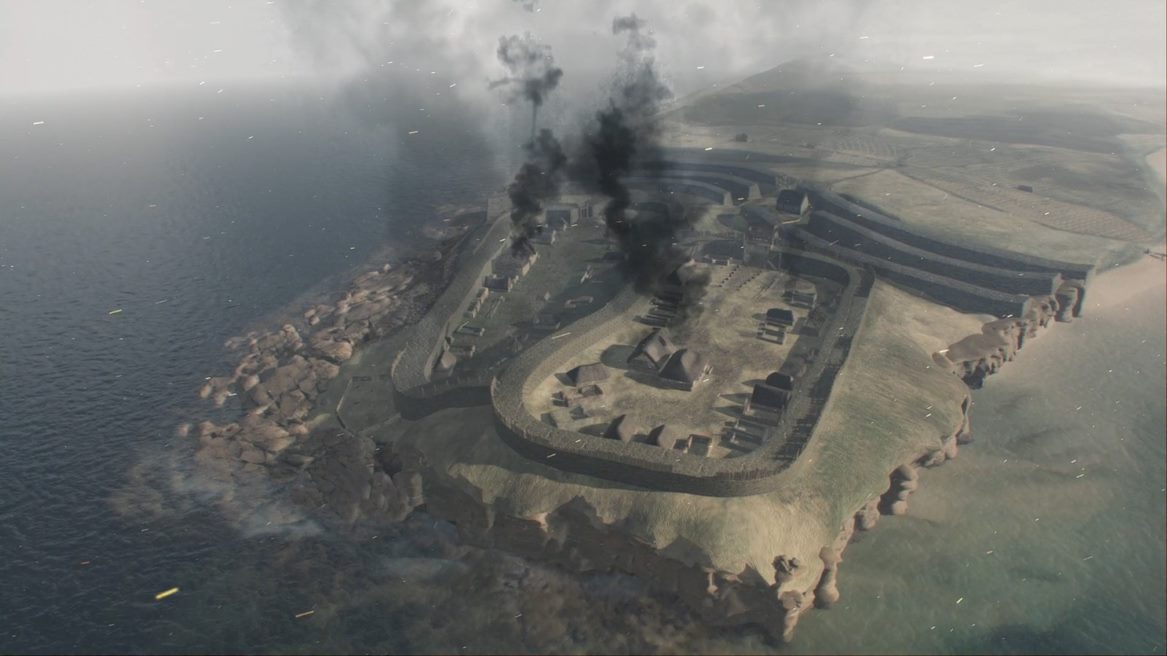 Professor Noble said: “The scale of houses and buildings we have discovered evidence of show that this was a densely populated and important Pictish site.

“We have found many objects which have helped us to learn more about the everyday lives of Burghead’s inhabitants between the 6th and 10th centuries AD. From metalworking to weaponry and even hair and dress pins, with each new dig we are finding out more about our ancestors who lived here.

“The foundations of the huge ramparts have survived far better than anyone anticipated, despite their wilful destruction over the centuries and the midden layers, which is effectively where the Picts threw their rubbish, have provided startling insights into the lives of the Picts to the archaeologists.

“It wonderful to see the work of our excavations spanning more than five years brought together in these stunning reconstructions which offer an amazing insight into how Burghead may have looked.”

The reconstructions were coordinated by Dr Alice Watterson of the University of Dundee with additional filming and editing work by Kieran Duncan and arial drone filming by Dr Kieran Baxter, members of Dundee’s 3DVisLab research group.

They also include a spectacular well enveloped in the ramparts. Elements of this can still be seen today and the archaeologists have pieced together how this fitted with dwellings and other buildings across the site.

Evidence of early Christian occupation was also uncovered in previous excavations, supporting theories that a chapel once stood at the entrance to the site, and this has been translated into the 3-D design.

The fort at Burghead was destroyed by fire in the 10th century - a time when Vikings are known to have been raiding the Moray coastline – bringing to a rapid end a way of life which had endured for centuries. The fort then remained unoccupied until around the 12th century.

A spectacular site in its heyday

Dr Kevin Grant, Archaeology Manager of Historic Environment Scotland said: “Burghead fort was one of the most important places in Early Medieval Scotland, and was built to be dramatic and imposing.

“These reconstructions help us imagine experiencing this spectacular site in its heyday. We are also delighted to support these excavations, which are transforming our understanding of Pictish Scotland and saving important archaeological remains from being lost to the waves.”

Dr Watterson added: "Burghead has certainly been one of our most challenging projects to date. Not only has it been one of the largest sites I have reconstructed, but in order to model its full extent we had to completely remodel the landscape to remove the modern town and rebuild the eroded cliffs."

"Working in visualisation and outreach involves blending interpretation and research with compelling visual storytelling. For our team, capturing a sense of place for Burghead was particularly important. Its dramatic location on the Moray coast is key not only to its archaeological interpretation but also what makes it such a special place to visit today."

Additional funding from Historic Environment Scotland is supporting additional excavations at the site which it is hoped will further understanding of how those who lived at the site connected to the wider world.

QUICK LINK: ENJOY A WHOLE YEAR OF HISTORY SCOTLAND MAGAZINE FOR JUST £20 WITH OUR ANNIVERSARY OFFER