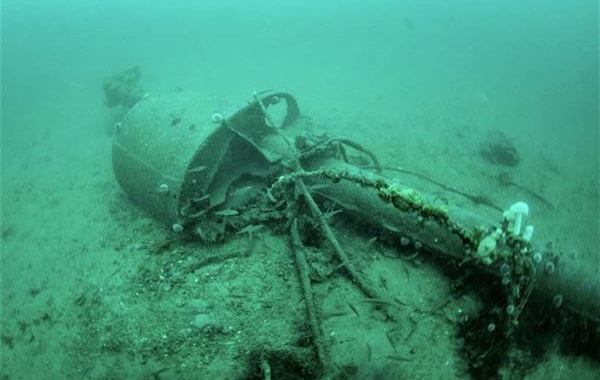 The extent and composition of the salvage site of the German High Seas Fleet, that was scuttled almost a century ago, in June 2019, has been published online.

The extent and composition of the salvage site of the German High Seas Fleet, that was scuttled almost a century ago, in June 2019, has been published online.

The centenary of the scuttling of the German High Seas Fleet in Scapa Flow, Orkney is approaching in June 2019. Historic Environment Scotland commissioned the Orkney Research Centre for Archaeology (ORCA) and SULA Diving to complete a full survey of the wrecks and debris remaining on the sea bed following the interwar salvage operations.

The seven remaining ships of the High Seas Fleet have seen Scapa Flow, Orkney, become one of the world's best-known dive sites. The wrecks are primary focus of recreational divers, but the remains of the vessels that were mostly recovered and removed from Scapa Flow have also been a recognised diving resource for many years. Yet, the exact extent and composition of these so-called salvage sites was unknown until this week, when the report of the second phase of work on these sites was published online.
Remains of the Scuttling
The overall aim of the Scapa Flow Salvage Sites Project was to determine what remains of those vessels of the German High Seas Fleet that were salvaged in the years that followed their scuttling in June 1919. Phase One, undertaken over the winter of 2016/17, involved a side scan sonar survey of the main anchorages and other areas thought to have been involved in the salvage process.
In the second phase of this project, divers and remotely operated vehicles examined and recorded the remains in detail.  The overall result is that the vast majority of salvage sites in Scapa Flow have been located and the remains at each site have been directly investigated and recorded.
The salvage of the German High Seas Fleet was an unparalleled achievement. It was initially said that the recovery of the larger German vessels was an impossible task given their sheer size and weight (some up to 28,000 tonnes displacement), but a unique method was used to recover these vessels, most of which were lying upside down on the seabed in depths up to 45m. The basic principle was simple - fill the vessels with air to the point that they floated to the surface.
What remains were found?
The process of flotation itself caused parts of the vessels to fall away, leaving behind debris which has now been recorded to form an incredible record of the details of construction of these warships and the ground-breaking salvage process. The fascinating wreckage examined included:

The report is useful for anyone interested in the construction of these historically important vessels and what happened to them. Where possible, photographs of objects on the seabed are matched with those taken of the same object when the ship was in use.

'One of the greatest salvage feats of all time'

Pete Higgins, Senior Project Manager at Orkney Research Centre for Archaeology said,” The German High Seas Fleet Salvage Site Project provides an insight into one of the most spectacular episodes in maritime history when forty four warships were raised from the seabed of Scapa Flow and salvaged. The report brings together the archaeological remains of this operation and not only records the position and scale of the debris field, but also tells the story of these ships and their salvage through the remaining artefacts.”
Philip Robertson, Historic Environment Scotland’s marine expert added, “As the centenary of the scuttling of the German High Seas Fleet approaches, the publication of this report marks a significant milestone for marine archaeological heritage in Scapa Flow, and we are particularly grateful to the many volunteers who have assisted us in documenting what survives of the Fleet following one of the greatest salvage feats of all time.”