Site report from excavations at the A75 Dunragit bypass 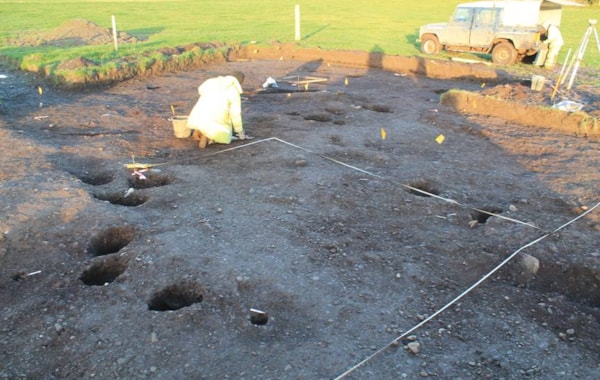 Site report from excavations at the A75 Dunragit bypass

A site report from excavations recently carried out by Guard Archaeology at the A75 Dunragit Bypass, Dumfries &amp; Galloway. ...

Over the last couple of years, Guard Archaeology teams led by Guard Archaeologists Warren Bailie and Kevin Mooney, have discovered a range of prehistoric archaeology spanning 7,000 years of activity, during excavations undertaken in advance of the A75 Dunragit Bypass in Dumfries and Galloway in south-west Scotland. Funded by Transport Scotland and carried out in collaboration with Amey and RJ McLeod, the archaeological remains include:


The remains of a Mesolithic house was discovered in an area of criss-crossing palaeochannels, on the edge of  a former estuary which existed here throughout prehistory. Radiocarbon dates recovered from the Mesolithic house revealed that this settlement dates to around 6,000 BC. A perforated stone adze was found on the Mesolithic site, not a common find on sites of this period and which may have been used to work wood. In excess of 13,500 Mesolithic flint microliths and knapping waste were also recovered, indicating that this site represents a core focus of Mesolithic activity in Dumfries and Galloway. The location here, on a coastal fringe, was probably deliberately chosen by the occupants to exploit readily available resources of fish and shellfish seaward and hunting grounds close at hand in the hinterland.

Neolithic remains were also found, and which may be related to the nearby ceremonial complex at Dunragit, previously excavated by Manchester University between 1999 and 2002. This comprised three concentric rings of timber posts, which had been preceded by a post-defined cursus monument. These remains were first spotted through aerial photography and the only visible part of this ceremonial complex is Droughduil Mote, a prominent conical shaped mound to the south of Dunragit.

This was once assumed to be a medieval motte but the Manchester University excavation revealed it to be a Neolithic mound, perhaps used, like the better known Silbury Hill in south-west England, as a elevated platform in ceremonies, before an Early Bronze Age cairn was built on its summit.

The new bypass route was carefully selected to avoid this archaeology and other known archaeological cropmarks, most of which are scheduled monuments. However, amongst the new archaeological remains discovered during the removal of topsoil from the A75 Bypass route, were Neolithic remains perhaps associated with the ceremonial complex.

A Neolithic structure or house was found by the Guard Archaeology team, constructed of multiple posts and from which amongst the flint and pottery artefacts was found a leaf-shaped flint arrowhead of Neolithic date. This rectilinear structure lay on a ridge overlooking the lower lying area of the Mesolithic site.

Two Bronze Age cemeteries were also discovered. Twenty cremations of likely Bronze Age date were excavated, including three Barrows. Finds from the excavations here included several fragmentary urns and one wholly intact example which contained the cremated remains of an adult. Flint artefacts were also recovered and one of particular interest was a very finely serrated transverse flint blade.

The remains of six Iron Age round-houses were also discovered. Known Iron Age settlements in Galloway tend to be enclosed by palisades or ramparts and found predominantly on hilltops, higher ground, coastal promontories or lochs, forming defended duns, hill forts, promontory forts or crannogs. Unenclosed settlements of the Iron Age tend to comprise single houses, but the Dunragit settlement is unusual in appearing to be a large unenclosed settlement on low-lying ground. It is only the second such Iron Age village to be found in Galloway, a previous one being discovered last year on the banks of the Black Loch of Myrton in the Machars. Iron Age pottery, which is not normally found on Iron Age settlements in Galloway was recovered from the Dunragit round-houses, as well as a Romano-British Iron Age brooch and evidence of metalworking. While radiocarbon dating has still to be undertaken, the artefacts indicate occupation of this settlement around 2,000 years ago.

Guard Archaeology's post-excavation work on these finds is due to commence soon, but the wealth of unforeseen finds recovered from Dunragit is likely to reveal new insights into prehistoric Scotland from the Mesolithic to the Iron Age eras, encompassing a range of ceremonial, burial and domestic structures and activities, and revealing the development, transformation and demise of a densely occupied prehistoric landscape.

For more on the work of Guard Archaeology, visit the website.