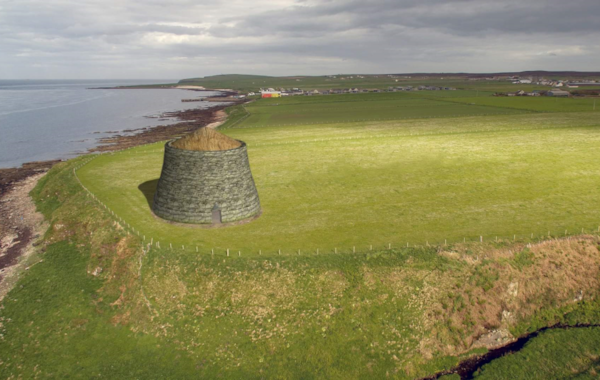 The Caithness Broch Project, which aims to build a replica Iron Age Broch and run it as a visitor attraction, has selected a suitable site for the structure.

The Caithness Broch Project, which aims to build a replica Iron Age Broch and run it as a visitor attraction, has selected a suitable site for the structure.

Once funding is in place, the broch will be built using the same techniques as the original builders, in order to provide an insight into how people lived in Iron Age Caithness.

A spokesperson for the Project told History Scotland: 'Last year we were awarded £10,000 from Big Lottery Fund Scotland and £2,000 from Highland Council towards the creation of a business case and feasibility study for our "ultimate aim", the construction of a replica broch. This piece of work was undertaken by Alan Jones Associates, and, in June, this body of work was completed.

'This was an important step in realising our vision, and understanding the mechanics of how the broch would fare as a business - i.e. would it be a success? Good news – the report states that our broch would be a sustainable venture!
The chosen site
'One of the most important aspects of this project was understanding where we should build the broch. This was, for us and for many others, the burning question. We were offered five sites, all along the east coast of Caithness, and by the North Coast 500 route. After many discussions we decided on a site at John O’Groats, beside to the John O’Groats Mill. To this end we are working alongside the John O'Groats Mill Development Trust in their ambitions to develop the area.
'There are a number of reasons as to why we have chosen this site – it has beautiful sweeping views across the Pentland Firth; ease of access and development potential, and perhaps most importantly, proximity to the NC500 and the major tourist landmark of John O’Groats would make the venture not only sustainable, but successful.
'This was a key requirement from Heritage Lottery Fund (whom we hope would fund our venture) – the proposition should be sustainable above all else. We have tried to strike a balance between authenticity and sustainability, however – there is archaeological evidence for brochs being built in this area, too – with a possible broch under Canisbay Church, and at Duncansby Head. Perhaps it’s time for a new broch to be built here too!'
Read the Caithness Broch Project's pick of top five Caithness brochs.
For more on the project, visit the website.