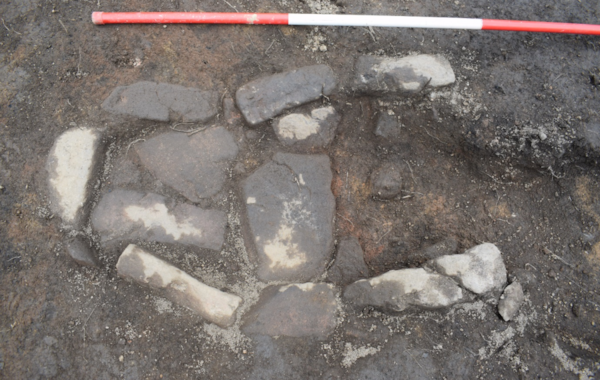 The search for an ancient monastery which disappeared 1,000 years ago and was the birthplace of the Book of Deer is to be showcased in a BBC Alba programme, highlighting a nine-day archaeological dig which took place in summer 2017.

The search for an ancient monastery which disappeared 1,000 years ago and was the birthplace of the Book of Deer is to be showcased in a BBC Alba programme, highlighting a nine-day archaeological dig which took place in summer 2017.

In a field in the north east of Scotland near Old Deer, thirty miles north of Aberdeen, a team of archaeologists, students and volunteers spent nine days digging and sifting through soil to see if they could find an ancient Pictish monastery that disappeared over 1,000 years ago.

This monastery was the birthplace of one of the most important texts in the Scottish Gaelic language: The Book of Deer - a gospel book written in Latin by the Aberdeenshire monks around the tenth century.  Material for writing on was so scarce that the monks used the blank spaces and margins of the gospel book to record land transactions and other notes in Gaelic, around the middle of the 12th century.

Over the last decade, the Book of Deer Project, a small charity based in Aberdeenshire and dedicated to raising awareness of the book, has commissioned and paid for archaeological digs, which for the last four years have been carried out by Cameron Archaeology Ltd, led by Ali Cameron.

This dig was the tenth dig and the first to uncover finds that could date to the monastic period.  Charcoal found in one of the trenches has been dated by radiocarbon dating to the years 1147-1260. Previous digs have unearthed much older or much newer finds, but nothing as close as this to the date of the monastery where the Book of Deer was written.

Not only is this the first written evidence of Scottish Gaelic that exists, but it is also writing about the everyday lives of ordinary people in the area.  It provides a unique insight into the early church, culture and society of this period, making the Book of Deer a rare and precious document. There is great hope and excitement amongst all those involved, as this is the strongest clue yet. The Book of Deer Project is already raising funds to commission a further dig in the same area in June 2018 to see if they can find conclusive evidence of the site of the lost monastery of Deer.

BBC ALBA is available on the following platforms:

Where is the actual Book of Deer?

The Book of Deer itself has been housed in Cambridge University Library since 1715.  In the late 17th century the book was owned by a Headmaster in London and then by the Bishop of Ely in Cambridgeshire. When he died, King George I bought his collection and gifted it to the Library - but it is unknown how the book came to leave Scotland in the first place.

Even Cambridge University Library was unaware of the book’s significance until Henry Bradshaw, the librarian at that time, discovered it in 1860.  Before c. 1100 it was in the early Pictish monastery at Old Deer in northeast Aberdeenshire. There is otherwise no trace of the existence of this monastery, hence the quest to find it through the archaeological digs.

The Book of Deer Project and Cameron Archaeology Ltd have been carrying out archaeological work for a number of years to try to locate the early medieval Monastery of Deer where the book was housed around 1000AD.  Previously, numerous trenches were excavated in Old Deer churchyard and around the village with no early evidence being found.  In 2017 the focus of the search for the early monastery turned to the area around Deer Abbey, founded 1219. A geophysical survey was carried out by Rose Geophysical Consultants, which used both resistivity and ground radar. Several very interesting ‘anomalies’ found by the geophysics were targeted for excavation.

This latest excavation took place from 24 June - 2 July 2017 and was funded by The Book of Deer Project. A total of 33 volunteers worked on the dig and three local school classes attended for half days as well as 18 members of the Aberdeen Young Archaeologists Club. An open day saw many local people visit the site.

Of all the trenches opened, two produced some interesting finds:

It is hoped that further excavation will be carried out in the summer of 2018 to get further dating evidence from this site and confirm whether this is the early medieval Monastery of Deer.