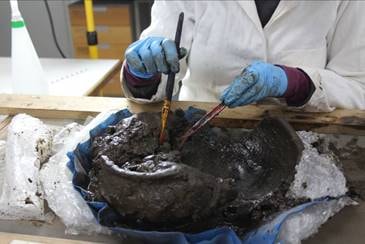 A remarkable, perfectly preserved, wooden bowl unearthed from a 2,000-year-old well has been revealed during conservation work being undertaken on the artefact this week.

A remarkable, perfectly preserved, wooden bowl unearthed from a 2,000-year-old well has been revealed during conservation work being undertaken on the artefact this week.

The bowl, discovered at The Cairns Broch archaeology site in Orkney, has an extraordinary story to tell of ancient repair suggesting it was a valued object during the Iron Age. Read more about the discovery here.

In July of this year, a team of archaeologists from the University of the Highlands and Islands Archaeology Institute, based in Orkney, excavated an underground chamber beneath the floor of an Iron Age broch at the site of The Cairns, South Ronaldsay, Orkney, as part of research at the site.

Now, on-going conservation work on a water-logged deposit, recovered from inside the underground chamber beneath the broch, has afforded an exceptionally rare glimpse of a stunningly well-preserved, 2,000-year-old, wooden bowl. The nature of the bowl, and the details emerging about its life story, may help archaeologists to better understand the enigma of such subterranean chambers, leading to a fuller appreciation of their complex role within Iron Age communities.

The first stage of the conservation work was completed this week, as specialist conservators at AOC Archaeology, based in Edinburgh, have now patiently ‘micro-excavated’ the bowl from its protective soil block. The work offers a clear view of the object for the first time in about two thousand years.

The very finely carved vessel, which is nearly complete, is exceptionally smoothly finished, appearing almost burnished. The bowl is around 30 centimetres in diameter, with an elegant profile, an everted rim (splayed outwards), a globular body and round-bottomed base.

Although the object has split into two large pieces and about twenty smaller pieces at some point in the past, it is largely complete. The bowl had been skilfully hand carved from a half-log of an alder tree. Tool marks are visible in the interior of the bowl, but the exterior has been finely burnished.

On one of the broken edges of the bowl there is something astonishing. A series of about sixteen strange looking wiggly strips of bronze can be made out. They are flush with the surface of the bowl and arranged in a tightly-spaced vertical column running up the height of the vessel along the line of a large ancient crack.

The strips are in fact a very unusual and distinctive type of wood rivet. Beyond these, a further small straight metal strip, also bronze, runs across the break and is an ancient bracket or staple! The staple and the rivets represent a very artful ancient repair, or repairs, made to the vessel to prolong its life.

There are other examples of Iron Age bowls with visible repairs, but the distinctive special metal fasteners are unique and appear to be otherwise unknown from the British Iron Age. 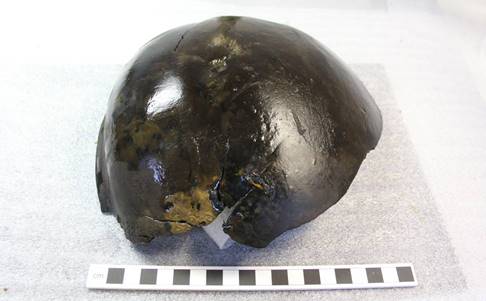 The repair work seen on the bowl suggests clues about the importance of the bowl in an Orkney context. Martin Carruthers, Lecturer in Archaeology at the UHI Archaeology Institute, Orkney College and director of The Cairns project said: “After first encountering the bowl this summer, we had wondered if wooden bowls, and other objects made from wood, might actually have been much more common than we would have previously expected for the mostly treeless environment of Iron Age Orkney. Perhaps archaeologists have been guilty of overplaying the scarcity of wood in Scotland’s Northern Isles.

“Maybe there were almost as many wooden vessels in circulation as there were ceramic ones, fragments of which we recover in great numbers from sites like The Cairns. The bowl discovery made us ask an important question: was the survival of the bowl in the well merely an outcome of the unique quality of preservation down there, or was its presence there also reflective of other special qualities accorded that place by people in the Iron Age? I think the biography of the bowl that is emerging could well help us answer these questions”.

Dr Anne Crone, a specialist in ancient wooden artefacts with AOC Archaeology, who is providing specialist analysis of the bowl, says, “The rarity of wooden vessels in Orkney could be why they went to such lengths to repair what is a quite beautiful object”.

The work on the bowl is providing lots of new and forthcoming information and it is hoped that will shed more light on the broch ‘wells’, and more for the project team to weigh up. Carruthers reflected: “If the bowl was used within the well, and not just placed there at the end of its life, then perhaps this is telling us something about the nature of the well, and how it was used. The great care that was taken over the repair of the wooden bowl to extend its life tends to suggest that such items were not actually common, and the Cairns bowl seems to have been highly valued.

For more information on the bowl, read this project blog.