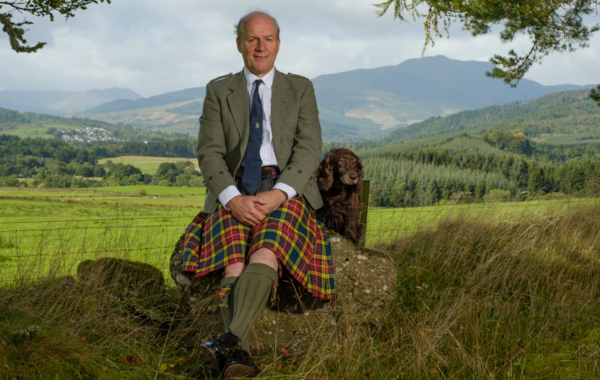 For the first time since 1681, Clan Buchanan will have a clan chief to represent millions of clansmen and clanswomen around the world.

For the first time since 1681, Clan Buchanan will have a clan chief to represent millions of clansmen and clanswomen around the world.

The clan, one of the largest and most ancient in Scotland, will be led by John Michael Baillie-Hamilton Buchanan, now known as The Buchanan. The chiefship of Clan Buchanan was last held by his ancestral kinsman, John Buchanan, until his death without a male heir in 1681.

The Lord Lyon King of Arms, the head of Lyon Court which regulates Scottish heraldry, has formally upheld a petition for Mike Buchanan to assume the chiefship of the clan. Mike Buchanan is a relative of James Buchanan, who served as the 15th President of the United States (1857-1861).

It follows decades of genealogical research conducted by renowned genealogist Hugh Peskett, who famously traced President Ronald Reagan’s Irish ancestry in the 1980s. He became a genealogist 50 years ago after his grandmother (a Buchanan clanswoman herself) urged him to find the rightful Buchanan chief. He researched lineage back to 1370 and established references in more than 300 documents from around the world to verify the claim to the chiefship of Clan Buchanan.

Statement from The Buchanan

The Buchanan said: “I am honored and proud that my claim to the chiefship of Clan Buchanan has been upheld by Lord Lyon.

“There has not been a chief for a very long time – over 337 years – but there is a thriving community of Buchanan clansmen, clanswomen and septs around the world. I look forward to meeting members of the clan, committing myself to clan matters in Scotland and attending some of the popular clan functions that take place overseas.

“My family has been acknowledged as leaders of one of the principal clan septs, the Buchanans of Leny and Arnprior, for many years but we have also believed that we had a good case for the overall chiefship.  It has been a long journey to prove our lineage.

“We first approached the Lyon Court informally over 20 years ago and it has taken decades of genealogical research to back up our claim – I am indebted to Hugh Peskett, my fellow Buchanan clansman, for his meticulous research and enduring tenacity.”

Genealogist Hugh Peskett said: “As a clansman of the Clan Buchanan, it was absolutely fascinating to delve into the history and ancestry of one of the oldest clans in Scotland. Tracing hundreds of years of lineage and unpacking the secrets of the past is no mean feat!

“My research took decades to compile and unequivocally confirms the chiefship claim. This is a historic moment for Clan Buchanan and I am truly privileged to have played my part. I believe my grandmother would be incredibly proud of what we have achieved.”

While the Clan Buchanan can be traced back to 1010 AD in Scotland, it now has several million members across Great Britain, the United States of America, Canada, Australia, New Zealand, South Africa and Jamaica among many other countries. Over five million people bear one of the recognized clan names, although not all will be clan members.

As well as those with the surname Buchanan, clansmen and women also include those with Scottish roots and surnames such as Bohannon, Coleman, Colman, Cormack, Dewar, Dove, Dow, Gibb, Gibbon, Gibb, Gibson, Gilbert, Gilbertson, Harper, Masters, Masterson, Morris, Morrison (some only), Richardson, Rush, Rusk, Walter, Walters, Wasson, Waters, Watson, Watt, Watters and Weir. These are known as septs.

They are represented by the world’s oldest clan society, the Buchanan Society, which was established in 1725 to support members of the clan in times of hardship, and the worldwide Clan Buchanan Society International.

'Our clan is complete once again'

“After 337 years our Clan is complete once again and we celebrate this historic event. I look forward to working with Michael as we continue to grow the traditions, history and honor of our Clan name. I join with Clan members of the name Buchanan and our many other sept names around the world in welcoming Michael as our chief!”

Patty Hopkinson, the Clan Buchanan Society International’s genealogist, said: “I could not be more pleased by the announcement of this wonderful news regarding the Lord Lyon recognising John Michael Baillie-Hamilton Buchanan's petition to assume the chiefship of our wonderful clan. This is an exciting time for Clan Buchanan and for Buchanan genealogy. I look forward to lending my full support to our new chief.”

The Clan Buchanan Society International flies a banner at Highland games around the world which features a lion rampant with tears of sorrow to represent the sadness of clansmen without a chief.