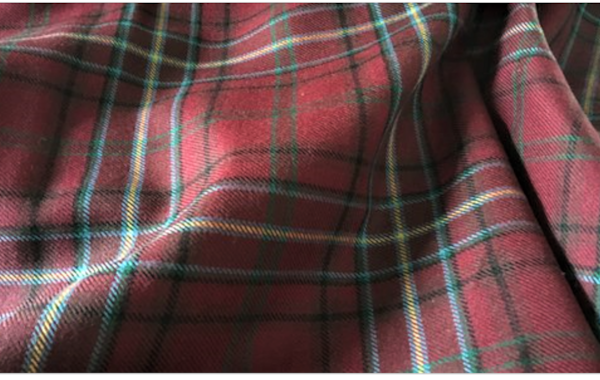 A tartan created exclusively for Colchester County, woven in Scotland and made into items in Nova Scotia, has been unveiled at a special ceremony.

A tartan created exclusively for Colchester County, woven in Scotland and made into items in Nova Scotia, has been unveiled at a special ceremony.

Jean Watson, the person behind Tartan Day, which is celebrated annually on 6 April, unveiled the exclusive tartan - which until then had been seen only by the five designers and the weaver - Locharron of Scotland.

The tartan is now available to purchase as a fundraising project for the Colchester County Highland Games. Items made from the tartan, including kilts, scarves, jewellery, sashes, bags, waistcoats and ties, can be bought on the website.

The story of the Colchester tartan

The background of the tartan is dark red, to match the red loamy soil of the county. The other cross-woven colours used are green (the land), blue (the Scots and the Bay of Fundy) and yellow (Acadians) and black (Mi'Kmaw nation).

Watch a video of the unveiling of the tartan, on 8 September 2017 in Truro, Nova Scotia:

Group image shows (left to right) James Finnie, Barb Simms, Deana Lloy, Linda Finnie & Scott Whitelaw. These are the designers and the only people who had seen the tartan prior to the unveiling (apart from the weaver in Scotland – Lochcarron)