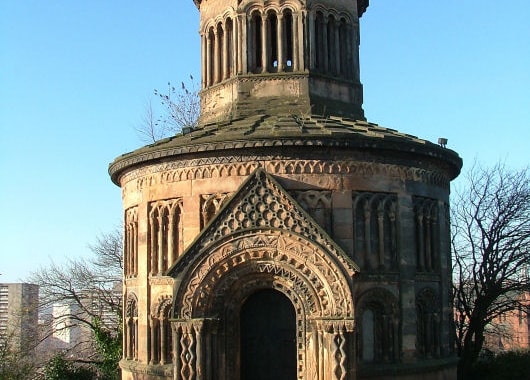 The Friends of Glasgow Necropolis are fundraising to restore an intricately-decorated Victorian mausoleum designed for Major Archibald Douglas Monteath, who served in the East India Company.

The Friends of Glasgow Necropolis are fundraising to restore an intricately-decorated Victorian mausoleum designed for Major Archibald Douglas Monteath, who served in the East India Company. One entertaining story - its truth debatable -  its truthfulness debatable – tells that that while serving in India, Monteath “made his fortune when an elephant carrying precious gems belonging to a Maharajah was captured and ‘relieved’ of its load by him".

Archibald was a cousin of General Sir Thomas Monteath Douglas whose Mausoleum, also being restored in the Scottish Borders, was the subject of an article in the January/February 2019 issue of History Scotland.

Major Archibald was interred in the mausoleum at Glasgow Necropolis in 1842, followed by his brother James Monteath Douglas in 1850. The intricacies of the naming of the two brothers is one of the subjects explored during heritage walks run by the Friends.

The design of the mausoleum

The monument is an unusual building, being of neo-Norman design in a cemetery of predominantly classical monuments. Intriguingly it has no writing, lettering or numerals inscribed anywhere on it – it is completely silent about its occupants.

The mausoleum is a circular temple building 30 ft in diameter. The main lower portion of the building is split into sixteen facets around its circumference, with one double-bay-wide entrance arch and fourteen deep, round-arched blank window niches at low level, each elaborately carved in a different design.

Above the carvings are recessed panels with four columns topped by semi-circular interweaved arches. On top of this a cornice supports the edge of the lower roof – a shallow conical roof of large stone slabs, each slab alternately higher and lower around the roof. Over this sits a lantern with eight facets, each facet having three slit openings flanked by columns topped with arches. Above these are regularly spaced grotesque faces which support the cornice and roof of the lantern – again stone but in a common tile pattern. This is topped with a mini version of the Choragic Monument of Lysicrates.

The Friends of Glasgow Necropolis is working to raise the £100,000 needed to restore the mausoleum. The video below explores the history of this historical burial ground.

The Friends is a voluntary organisation and all donations go towards its restoration and conservation work. To book a tour around this fascinating Victorian cemetery or to find out more about the work, visit the website.

(images and research courtesy of Ruth Johnston, author of Afterlives Tales Of Interments)