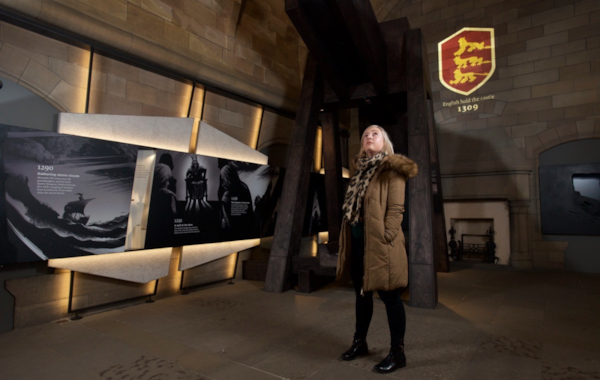 Fight for the Castle focuses on the years 1286 to 1356, when Edinburgh Castle changed hands several times between the Scots and English. Housed in the castle’s 19th century Argyle Tower, the exhibition sits above the Portcullis Gate, where the entrance to the castle has been since prehistory. The gateway itself was the scene of a siege in 1341.

The history is brought to life via projected images and animations that help to tell the story of the castle’s fortunes from the death of Alexander III after a banquet at the castle in 1286, through the return of David II at the end of the Second War of Independence in 1356, when he began rebuilding the castle as a home fit for royalty.

Fight for the Castle has been designed for a multi-lingual audience, bearing in mind the international appeal of Edinburgh Castle. The story is told using sound and light, images and historical objects. Short, simple text provides an historical timeline and for those with little time or no English, the story of the castle changing hands on several occasions is summarised in a single attention-grabbing animation.
QUICK LINK: Explore Edinburgh castle with this orientation map
Medieval objects found within the castle’s walls are displayed throughout, ranging from a 14.5kg trebuchet ball to the tiny spherical remains of frozen sparks from the smithy set up in the castle in 1335.

Historic Environment Scotland Chief Executive Alex Paterson was joined by Cabinet Secretary for Culture, Tourism and External Affairs Fiona Hyslop on a tour of the exhibition, which was completed at the beginning of the month. Alex Paterson said: “We’ve delivered something completely different for the ‘Fight for the Castle’ exhibition - an immersive and atmospheric experience that we hope will both inform and inspire visitors through sound, light and projected imagery.
“Edinburgh Castle is Scotland’s most-visited paid-for attraction, with over two million people passing over the castle’s drawbridge in the last financial year. As visitor numbers continue to grow year on year, we’re continuously looking for ways to enhance the visitor experience.”
The £332,000 project has been delivered under Historic Environment Scotland’s Investment Plan, which identified 20 properties prioritised for investment to improve their condition and enhance the visitor experience.
Exhibition details
The Argyle Tower Fight for the Castle exhibition comes as minor works continue on the Edinburgh Castle Royal Palace’s ‘Royal Line of Mary Queen of Scots’ display - a new depiction of the family tree linking the portraits hanging in one of the Scottish royal family’s principal residences. The exhibition is now open to visitors.
Entrance to the new exhibition is included in the admission price, with tickets available for purchase from the Edinburgh Castle website.
QUICK LINK: Ten facts you (probably) didn't know about Edinburgh Castle