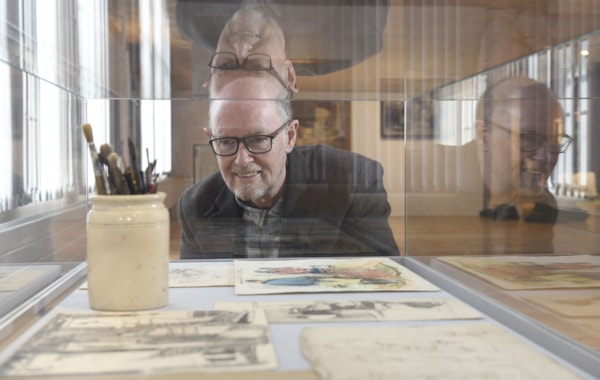 Eileanach: Na dealbhan aig Dòmhnall Mac a’ Ghobhainn / Islander: The Paintings of Donald Smith runs from 29 May to 26 September 2021 at The City Art Centre, Edinburgh.

Who was Donald John Smith?

Born in rural Lewis in 1926, Donald John Smith was, as Gray’s School of Art Principal Ian Fleming wrote in 1958 – ‘the outstanding student of his year… unquestionably a man of great ability as an artist’.  His painting acknowledged movements in Europe and America but remained resolutely local in its subject matter. From his studio on the west side of Lewis where he worked from 1974 to his death in 2014, his intense, lyrical images of island fishermen and women celebrate their indomitable human spirit.

In 2011, five of Donald Smith’s ambitious paintings of Stornoway harbour were exhibited at the City Art Centre in ‘Window to the West’, an examination of the relationship between the visual arts and Gaelic language and culture. In the accompanying catalogue, Professor Murdo Macdonald suggested that a full evaluation of Donald Smith’s prolific and focused work was overdue. The exhibition, a partnership project between the City Art Centre and An Lanntair Gallery in Stornoway, is part of that process.

Exhibition curator David Patterson said: 'The City Art Centre has made a deliberate attempt in recent years to showcase Scottish artists who have largely been overlooked in the story of Scottish art. We are therefore delighted to be partnering with An Lanntair in Stornoway to shine the spotlight on another unheralded painter. Donald Smith may not be well known by many, but hopefully this exhibition will go some way to rectify this and draw attention to a unique talent.'

Islander: the Paintings of Donald Smith opens on 29 May 2020, and runs until 26 September. Admission is free, pre-booking essential.