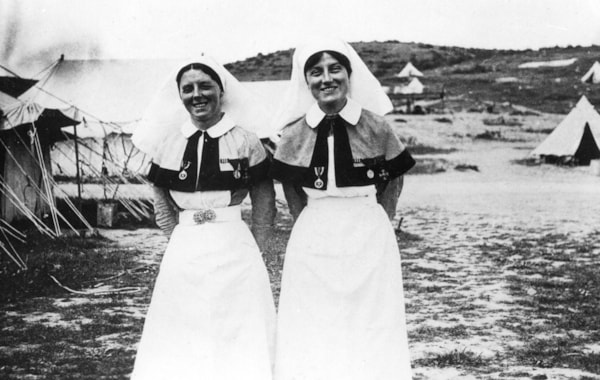 A plaque that pays tribute to nurses who lost their lives in the First World War has been unveiled in a Remembrance Day ceremony at Edinburgh's Central Library. ...

A plaque that pays tribute to nurses who lost their lives in the First World War has been unveiled in a Remembrance Day ceremony at Edinburgh's Central Library. For more on Scotland in the Great War, read our dedicated archive pages.

It is the first memorial to bring together more than 500 names of British, Irish and Dominion Force nurses who died in service or as a direct consequence of their role in the conflict and is the result of research carried out at the University of Edinburgh by historian, Yvonne McEwen. Now in her role as Director of the University’s Scotland’s War engagement project, she has collaborated with a number of partner institutions to produce this tribute.

The Deaconess Nurses Association, Lothian Health Service Fellowship and the Royal Naval Association in Ireland are among the organisations that have worked to support the memorial. Donations have also been made by members of the public.

Yvonne McEwen said of the project: 'Nurses in the First World War were often casualties in just the same way soldiers were – with mothers, fathers and siblings waiting anxiously at home. It is with the support of our partners that we have been able to create the memorial plaque, helping to share their narrative and reveal some of the hidden histories of these remarkable women.'