The 'golden age' of ocean travel will be reimagined at a new exhibition, which will explore the design and cultural impact of the ocean liner.

The 'golden age' of ocean travel will be reimagined at a new exhibition, which will explore the design and cultural impact of the ocean liner.

V&A Dundee’s inaugural exhibition will be Ocean Liners: Speed and Style, which will showcase more than 250 objects from public and private collections around the world. The exhibition will include paintings, sculptures, ship and engine models, wall panels, furniture, fashion, textiles, photographs, posters and film.

It will display objects never-before-seen in Europe, and reunite objects not seen together since on board these spectacular vessels which revolutionised travel in the mid-19th century to the late 20th century. The exhibition will also explore Scotland’s important role in the design and development of ocean liners.

Visitors will be invited to experience what it would have been like to step on board these ‘great floating palaces’ and discover how ocean liners became one of the most powerful and admired symbols of 20th century modernity.

Life on board an ocean liner

Sophie McKinlay, Director of Programme at V&A Dundee, said: “When V&A Dundee opens in September 2018 visitors will get a sense of what it would have been like to experience life on board an ocean liner.

“There is a lot to be said about the romance of these floating cities which are a wonderful example of a totally designed experience. As well as the glamour and hugely successful marketing of ocean liners, the exhibition will also venture into the engine rooms of these impressive vessels, exploring the innovations in engineering that so radically changed the way people travel.

“This exhibition demonstrates how design covers such a huge range of disciplines drawing upon collections, skills and expertise, as well as exploring the design and cultural impact of the ocean liner in a way that has never been done before.

“We are delighted to be working closely with our colleagues at the V&A in London, who have spent years researching and producing this exhibition, to bring Ocean Liners: Speed and Style to Dundee.”

Exhibition highlights include Stanley Spencer’s painting ‘The Riveters’ from the 1941 series Shipbuilding on the Clyde. Commissioned by the British Government to record industries involved in World War Two, it shows the strict division of labour in the shipyards and reflects the huge and highly skilled workforces involved in the construction of liners.

Ocean liners were exceptional objects of engineering and their design and construction required huge workforces. Clydebank was the most important centre for British ship building. ‘The Riveters’ is part of Stanley Spencer’s epic series Shipbuilding on the Clyde commissioned by the British Government to record industries involved in World War Two.

Stanley Spencer visited the Clyde shipyards and sketched the different activities involved in shipbuilding. In this scene evoking the clanging sound of metal, highly-skilled riveters join pieces of masts by hammering red hot rivets into the plates. The specialised workers depict the division of labour in the shipyards. 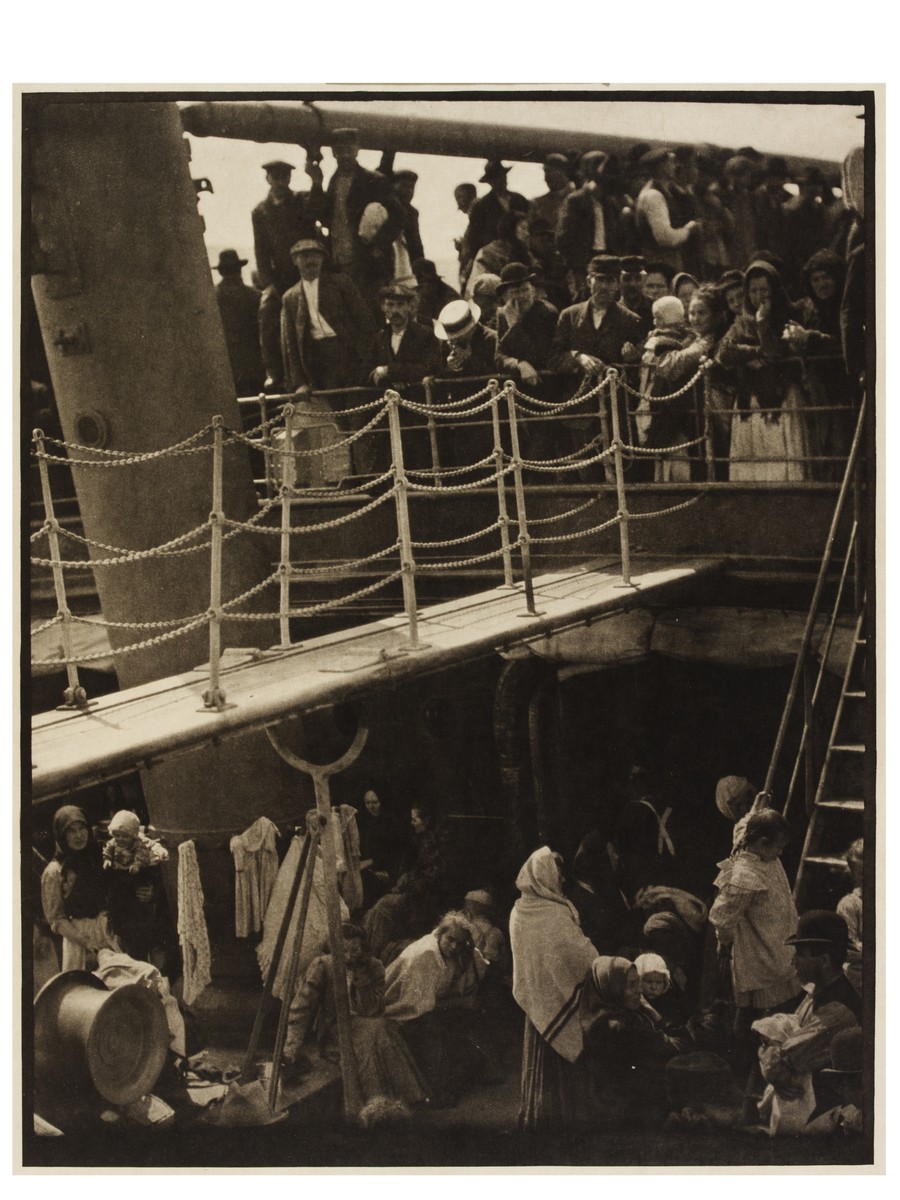 For much of the 19th century international immigration was a highly profitable business for shipping lines, with most global immigrants enduring extreme overcrowding and very poor on-board conditions – a vastly different experience from those travelling in first class.

The Steerage shows immigrants returning to their European homelands on the steerage level of the fashionable ship Kaiser Wilhelm II, the one on which American photographer Alfred Stieglitz sailed to Europe in 1907. Hailed as one of the greatest photographs of all time, Stieglitz felt that this spontaneous shot perfectly captured related shapes as well as human feelings.

He later recalled: “I saw shapes related to one another - a picture of shapes, and underlying it, a new vision that held me: simple people; the feeling of ship, ocean, sky; a sense of release that I was away from the mob called ‘rich’.”

Ocean Liners: Speed and Style, supported by Baillie Gifford and players of the People’s Postcode Lottery, at V&A Dundee from 15 September 2018 – 24 February 2019 vandadundee.org/oceanliners