Poppies: a symbol of remembrance - the story of how the Scottish poppy was created 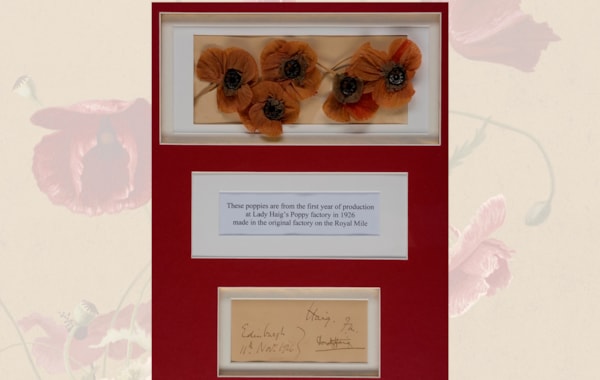 In Britain we tend to think of the poppy lapel badge worn each November as a concept of Earl Haig when actually it was a trio of women who can take the credit for its ubiquitous presence, writes Elaine M Edwards.

Moina Belle Michael, Anna Guérin, Dorothy Haig: three women who since the end of the First World War have had a hugely positive impact on the welfare of ex-service personnel and their families. Although few people will have heard of Michael & Guerin, more will have heard of Lady Haig of course, though mainly in relation to her husband - between them they are responsible for the poppy that is sold around the world each year to mark Remembrance Day.

As the First World War drew to a close Anna Guérin, a French war widow and Moina Michael, an American teacher, independently developed the idea of using the red Flanders poppy as a means to remember the dead of ‘the Great War’.

Immortalised in the 1915 poem In Flanders Field, by Canadian military doctor and artillery commander Major John McCrae, the poppy is a poignant symbol of remembrance of the sacrifices made by so many.

In Flanders fields the poppies blow
Between the crosses, row on row,
That mark our place; and in the sky
The larks, still bravely singing, fly
Scarce heard amid the guns below.

We are the Dead. Short days ago
We lived, felt dawn, saw sunset glow,
Loved and were loved, and now we lie
In Flanders fields.

Take up our quarrel with the foe:
To you from failing hands we throw
The torch; be yours to hold it high.
If ye break faith with us who die
We shall not sleep, though poppies grow
In Flanders fields.

Michael taught a class of disabled ex-servicemen at the University of Georgia. Realizing the need to provide financial and occupational support for these men, she began selling silk poppies to raise funds to assist disabled veterans. In 1921 the poppy was adopted as a symbol of remembrance by the American Legion Auxiliary.

Concurrently a member of the French YWCA, Anna Guérin began production of fabric poppies and travelled the world encouraging countries to adopt the symbol. She made arrangements for the first nationwide distribution of poppies in America (working with Moina Michael), saw the promotion of the poppy in Canada and the adoption of it by the Canadian League and also in New Zealand and Australia.

In 1921 Guérin met Field Marshal Douglas Haig, founder and president of the British Legion, and persuaded him to adopt the poppy as an emblem for the Legion. Haig then successfully convinced the Legion itself to adopt it formally as the symbol for their Poppy Appeal. The following year Haig founded the first Poppy Factory in Richmond, Surrey.

So popular were these poppy lapel badges that few were left to be sent to Scotland for sale. To address the shortage Lady Haig decided Scotland needed its own means of production and indeed its own distinctive poppy design.

'Two workers, a pair of scissors and a piece of paper'

In March 1926 poppy production in Edinburgh began albeit with just “two workers, a pair of scissors and a piece of paper” though numbers soon rose to twenty eight. Soon there was a waiting list of 117 men who wished to be employed making poppies.

Sales were such that it was felt Scotland could support its own factory. A site was identified in Edinburgh’s Canongate. As demand continued to grow the factory moved to bigger premises in the Warriston district of Edinburgh. This is still where war veterans produce the Scottish poppies, all of which are still handmade, that are sold throughout Scotland. To qualify to work at the Lady Haig Poppy Factory each veteran must be in receipt of a war pension. The factory still bears Lady Haig’s name and in 2017 employed its first female poppy maker. There has never been a bar against women working on the factory floor, but until recently no women had applied to do so.

For a number of years the Lady Haig Poppy Factory made a wide range of domestic items including lamps, fire-screens and children’s toys. Lady Haig continued to be involved with the Poppy Factory throughout her life, even being seen selling the factory’s products behind the Factory shop counter from time to time.

Born Dorothy Maud Vivien, she was one of twin daughters of Lord Vivian. From 1899 to her marriage in 1905 she was Maid of Honour to Queen Victoria and Queen Alexandra. She became known for fearlessly defending her husband’s memory and for continuing his charitable work for the sake of ex-servicemen. Countess Haig passed away in Bangor, North Wales in 1939 at the age of 60 by which time she had been widowed eleven years.