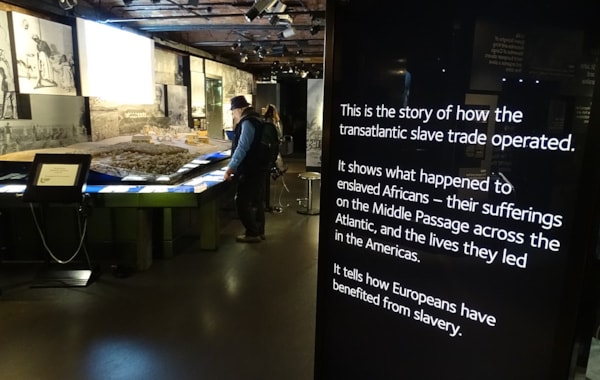 Jessica Elliot (aged 16) argues that Scottish links to the Atlantic Slave Trade should be taught as a mandatory subject for all schools.

Jessica writes: As the American Declaration of Independence states, “all men are created equal”, to have the same rights and opportunities as one another – but are we all treated as equals? No. In order to be equal in truth, humans would have to be identical, as you can’t assign a value of traits, such as intelligence and creativity, which would allow them to be compared.

People like to think that Humankind was created for all of us to live on this earth and live our lives freely - not as overlords of one another. The evolution and use of God to establish one group of people as inherently superior to one another.

For example, Christianity was a central feature during the 19th- century in American life for both slaveholders and anti-slavery activists. To argue persuasively against slavery, the abolitionist very cleverly had to find ways to use the Bible and Christian tradition, along with many humanitarian and economic ideals to make their case.

This is the main idea of why a certain type of race rose to power and overtook the other. They believed they were better than the individuals who did not look, act or talk like them. It is said that Prince Henry, the Navigator of Portugal first came up with the idea of capturing foreigners and enslaving them. These people were enslaved, sold for financial gain, and put into a life of misery which allowed others to profit. To put it simply, they were assets.

Some people take care of assets and personal items, but others fail miserably at it. This is only a small proportion of what the slaves had to go through.

People need to be educated by us to treat our equals the same from a young age. There are still others  who believe that they are superior just because they have a certain feature that they were born with. Why do people hate those of a different colour? It is because they are ignorant, resentful, and harbour feelings of superiority. Unfortunately, during times of unrest those are the voices that can be heard most and the viewpoints that they hold spread like a disease and can infect others.

We need to educate our society about the slave trade. Although it is something that Britain should be ashamed of, we should not hide nor shy away from it - it is our history.

Learning from the past

In my opinion, I think that Scotland should have a slavery museum. There are slavery museums in America - The Whitney Plantation Historic District (Louisiana), The Old Slave Mart (South Carolina), and The United States National Museum (Fredericksburg) to name a few.  Liverpool, which has a big role in the slave trade, has the ‘International Slavery Museum’. It appears this is the only museum in the UK dedicated to slavery.

In People’s Palace, Glasgow, there is a nod to slave ownership in Scotland: The John Glassford family portrait. He was a tobacco merchant and kept slaves, in the painting there. The boy in this painting was smeared out. There are many conspiracies about the boy; did Glassford try to cover up out involvement with the trade? Are we that spiteful?

No, in fact the boy was covered up with dirt and grime over time.  I would say that this is good at representing the reality of Scotland owning up to her slave past, it is not enough and we need to work hard to clean out history to help people see the connections as much as we can.

Even though Scotland’s involvement is not widely spread, it truly needs to be taught all over the country to educate ourselves about this subject and how it can affect others. If more places like this existed, we would have more knowledge about what happened during those times.

Knowledge at our fingertips

In modern times our ease of access to information allows anyone to have the knowledge that they need at their fingertips and in schools we are taught about some of the horrific actions of other countries; the holocaust, the American Civil Rights Movement, votes for women, but the African slave trade and countless other examples of terrible unspeakable misery brought by racism and ignorance continue to go unchecked.

We, as bright Scottish individuals need to take a stand and educate our young people about what our true history is. It happened, we lived it, we were tortured by it. These events took place and we cannot alter the path of history. We may not agree with it, but they happened. We learn from it and we educate from it. People should not be clueless about the mass devastation that occurred from our ancestors in Scotland - we remember and commemorate it.