Striking it rich overseas: the Robertsons of Alvie in Van Diemen's Land 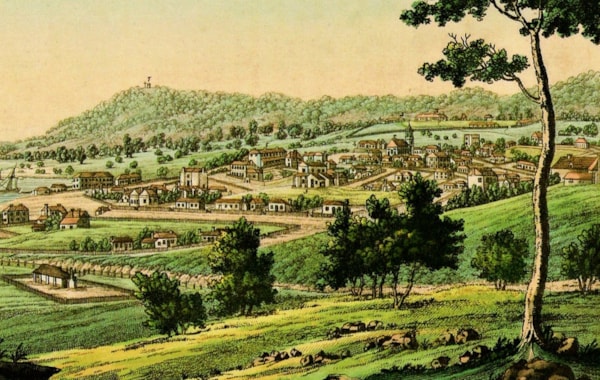 Within a rather quirky publication entitled The All-Time Australian 200 Rich Listappear the names of Daniel Robertson and William Robertson, at 75 and 141 respectively.The book’s scant biographical details do not even recognise them as brothers. Yet they and two other brothers emigrated to Van Diemen’s Land (now Tasmania) from Dunachton in the parish of Alvie, Inverness-shire, all achieving undreamt success.

Their oldest brother, Duncan, remained in the Highlands to eke out a living as a poor tenant farmer. Nothing better illustrates the opportunities of emigration – and these brothers were far from the only Alvie residents to make their mark in Australia, for over the next three decades 70 members of the Robertson family emigrated, not including their equally successful McBean and Mackintosh relations.

Dunachton lies on the north side of the river Spey in the central highlands of Scotland, part of the old lordship of Badenoch. A small estate owned by the chief of clan Mackintosh, Dunachton was, in common with the whole of the Scottish highlands, undergoing a period of profound economic, social and cultural upheaval arising both from the gradual post-Culloden disintegration of the old clan system and the rising tide of commercialism.

Many old Highland estates were in the process of being sold or broken up, with the traditional communal runrig farms converted into single-tenant units or taken by wealthy sheep farmers, resulting in clearances, landlessness, unemployment and rising levels of poverty. The unprecedented rate and extent of change brought not only a traumatic destabilisation of the traditional social and economic fabric of the highlands, but an equally significant cultural dislocation – and with it a sense of betrayal by the clan elite.If not always erupting into open anger, it implanted at the very least a considerable degree of unrest into the psyche of the highlander regarding future security.

Mackintosh himself had begun just such a process in 1791-92 with the issue of eviction notices to all his Dunachton tenants, a process not finally complete until the 1820s. By then, the old runrig farms had been entirely replaced by nineteen small to medium independent farms resulting in the loss of many of the old tenantry. It is hard to conceive just how stressful and disruptive this prolonged process of restructuring and dislocation must have been to families who had farmed there for generations.

Even aside from such difficulties, life in Dunachton was harsh. Moorland and hill constituted 95% of the estate, with both arable and pasture extremely limited. Badenoch’s landlocked mountains subjected it to some of the harshest climatic conditions in Britain, rendering harvests precarious. Survival thus depended largely on pastoral farming, particularly cattle – by far the most important sector of the Badenoch economy. The outbreak of war with France in 1793 did, however, bring an unexpected dividend in the sharp increase in cattle prices – though inevitably such profits were creamed off by landowners like Mackintosh who exploited the wartime bonus by tripling his Dunachton rents.

QUICK LINK: The Sutherland Clearances: the story of Jessie Ross

But peace in 1815 hit hard. Unemployment soared, cattle prices plunged to one-third of average war prices, while, with cruel timing, the eruption of Mount Tambora in 1815 ushered in ‘the year of no summer’, with successive bad harvests requiring famine relief measures in Badenoch by 1817. Unusually harsh winter storms brought heavy sheep losses while the intense cold of 1820 led to potatoes being ‘frosted in [people’s] houses as well as in the [storage] pits’. With local landowners, Mackintosh included, maintaining rents at their inflated wartime level and the spectre of the clearances looming over the post-war highlands, prospects in Dunachton by the early 1820s must have appeared bleak.

It is out of this period of profound upheaval and distress that the Robertson brothers emerged. One of the poorest farms on Dunachton was Cluanach, home to Donald Robertson and his wife Christian McBean, six of whose children (four sons and two daughters) would eventually emigrate to Australia. The first to go were John and William, the second and third sons, sailing for Van Diemen’s Land in the summer of 1822. No letter or diary survives to explain this momentous decision, but cost and distance alone ensured that such a step was not undertaken lightly. Like all emigration, it must have been a fine balance between negative and positive forces, the push and pull factors.

As younger sons, John and William were unlikely to succeed to the family farm, such as it was, and agricultural ‘improvement’, particularly the amalgamation of many smaller farms, had hugely reduced the amount of available land while further increasing rents. The choice was stark: either remaining in Badenoch to face downward mobility into the ranks of landless labourers or leaving for the appalling urban slums and factories of the south.

Against such negative prospects, emigration had to be an attractive option – but why Australia? Canada was easier, cheaper, safer, with well-established networks of Gaelic-speaking Highlanders including many from Badenoch. Van Diemen’s Land not only involved a much longer and far more expensive journey, it also carried the stigma of being a convict colony. Furthermore, it was a territory where no Badenoch foot – convict or free – had as yet trod. Therein, perhaps, lay both the attraction and the opportunity.

Apart from the sheer excitement of such a venture, the ‘pull’ factors were strong. With Van Diemen’s Land only recently opening its shores to free settlers there was an inevitable rush of publications extolling its virtues. Perhaps the most influential for the Robertsons was by James Dixon, captain of the ship Skeltonwhich had sailed to the colony from Leith in 1820.

His account, published in Edinburgh in February 1822, was effusive: the climate ‘much superior to Australia’; it was the ‘granary of New South Wales’; wheat was ‘uncommonly fine’; there were ‘large extensive plains’ and grassy woodlands ‘excellent for sheep and cattle’; and Governor Macquarie himself had predicted that the island would become ‘one of the most valuable colonies belonging to the crown’, with wool ‘a most valuable export’.

At the same time, Scottish journals and newspapers like the Scots Magazine, theEdinburgh Review and the Scotsman were also promoting the colony as an attractive destination, with enthusiastic letters from recent settlers and helpful advice for prospective Scottish emigrants.

For two young highlanders who had honed their pastoral skills in the harsh environment of Badenoch, it was a powerfully seductive image. Even more so because of the land deals: grants of 500 to 2,500 acres available free, not as tenants subject to landlords, but as owners, with convict labour provided free in return for maintenance.

The only catch was the requirement for settlers to provide a minimum £500 capital, not for purchasing land, but as an essential cushion until farms became productive. Momentum was further increased in January 1822 with the colonial department’s advertisement in theScotsmanfor ‘persons desirous of settling in New South Wales or Van Diemen’s Land’, with instructions for prospective applicants.

Edinburgh in particular was abuzz with talk of Australia, not just through the media, but because of the proposed formation of the ‘Australia company’ by the merchants of Leith who saw the potential for an east-coast colonial trade to rival Glasgow’s domination of the Atlantic markets.

Any lingering doubts were surely dispelled by reports from home in April 1822: not only was there ‘a great outcry in Badenoch on the badness of the times’, but also a ‘scarcity of money’, with one local farmer complaining, ‘the times is so precarious that I am at a loss to know what to do’.  John and William knew precisely what to do.

READ THIS ARTICLE IN FULL IN THE JAN/FEB 2019 ISSUE OF HISTORY SCOTLAND.