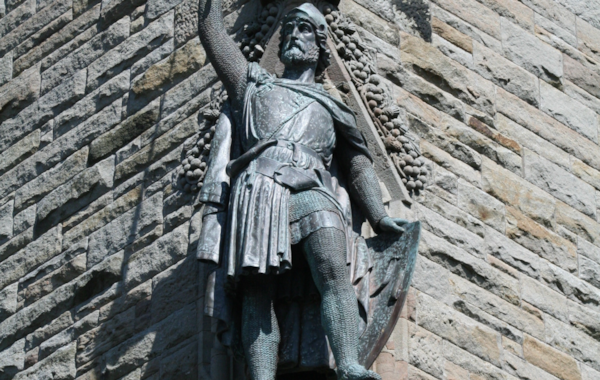 Conservation work has begun on the huge bronze statue of Sir William Wallace, which is due to be temporarily removed from the National Wallace Monument in Stirling.

Conservation work has begun on the huge bronze statue of Sir William Wallace, which is due to be temporarily removed from the National Wallace Monument in Stirling.

The 14-foot bronze figure will be removed from its position on the iconic landmark and will undergo around ten weeks of specialist repair before being returned ahead of celebrations to mark the monument's 150th anniversary in September 2019.

Conservation engineer Jim Mitchell of Industrial Heritage Consulting, who is the project engineer, explained what was discovered whilst on-site assessment was being carried out: 'It is a privilege to be involved in such a prestigious and challenging project. The decision to dismantle in situ has been proved correct as we have found around 500kgs of sand and other fill inside the statue. This was done to deliberately add weight.

'All of that must be carefully removed before the rest is lifted, due to the fragile nature of the bronze. We are looking forward to examining this massive bronze in the workshop, to better understand the sculptor’s approach.

What will the work involve?

The William Wallace statue was designed by Glasgow architect John Thomas Rochead and constructed between 1861 and 1869 at a cost of £18,000. It was created by renowned Edinburgh sculptor David Watson Stephenson and was added to the Monument in 1887.

Prior to work commencing this month (February 2019) specialists used the latest technology to analyse its condition, guiding how they would perform the intricate task of its removal and restoration. This included an x-ray survey, an endoscopic survey and ultrasonic thickness-mapping. A sample was also taken of the casting bronze to identify a match for repair metal and brazing wire.

The specialist restoration will involve:

The work forms part of the overall restoration project at the National Wallace Monument, which is being funded by Stirling Council and is expected to total £515,000.

The Monument was last year prioritised for restoration works by the Council and Stirling District Tourism – an independent charity which manages and operates the Monument – following a building and condition survey.

Stirling Council Leader Scott Farmer said of the restoration: 'We agreed this investment at a Full Council meeting to safeguard the future of the National Wallace Monument, which is one of Scotland’s most iconic landmarks and one of Stirling’s most popular attractions.

'These essential repairs to the stunning statue of Wallace are hugely challenging and complex, but they will ensure this unique, global attraction is back in peak condition for the Monument’s 150th anniversary celebrations and for years to come.”

Stirling Council Deputy Leader Danny Gibson added: “It was critical we intervened as a Council to preserve this iconic statue, which is one of the first sights thousands of visitors see when they arrive at the Monument entrance.

“I am delighted we are now progressing with the restoration and I’m looking forward to seeing the statue once it has been returned to its former glory.”

VIDEO: 'Wallace sword' is returned to the Wallace Monument

For more on the National Wallace Monument, visit its website.