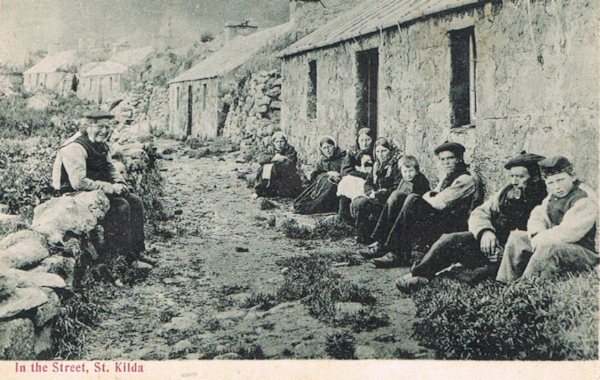 Fiona J Mackenzie, Canna House Archivist, tells the story of one of the last people to visit St Kilda before the evacuation of 1930 - 90 years ago this month.

On 10 May 1930, the residents of the remote St Kilda archipelago asked the British Government to facilitate their evacuation. Due to disease and poverty they could no longer survive there and so they were left with no other option than to leave St Kilda, to live on the mainland.

A few days after the islanders’ plea reached the mainland, US-born folklorist Margaret Fay Shaw visited the island on the SS Hebrides. At the time Margaret was living in North Glendale, South Lochboisdale, South Uist, taking pictures and recording songs and stories of a disappearing lifestyle and she jumped at the chance to visit the island.

Although Margaret documented her experiences on that trip, it was many years before she published those memories, in The Scots Magazine of August 1980. Here, we use some excerpts from those memories to tell us more about that sad period in St Kilda’s history.

Margaret recalled: ‘In 1930, I was living in the thatched house of Peigi and Mairi Macrae on their croft at Glendale on the south side of Lochbosidale in South Uist. I had lived there for a year learning Gaelic in order to collect traditional Gaelic songs with which South Uist then abounded. One day in May I went to Lochboisdale and there lying at the pier was the McCallum Orme ship “Hebrides” which then used to take general cargo and a few passengers round the islands in the summer.

‘I was told that she was on her way to make the first spring trip to St Kilda and that I could go if I was at Lochmaddy where she would be in the morning after her calls at Skye. Luckily the MacBrayne mail steamer was calling that same evening at Lochboisdale on her way to Lochmaddy and this gave me time to cross to Glendale in a lobster boat, collect my heavy Graflex camera and clothes then get back to the pier in time. I thought I would bring the news to the Macraes but I was met at the door by Mairi saying that she heard I was off to St Kilda and it would cost me three pounds, ten shillings. Such is the bush telegraph in the islands.’

The approach to St Kilda

‘As we approached St Kilda we could see thick white cloud concealing the tops of the islands and we were surrounded by thousands of sea birds, mostly fulmar and gannets. But as we neared the entrance of the long horse shoe bay of Hirta, the main island, the cloud lifted and gave the vision of wild beauty that has so often been described. The small islands looked inaccessible but Hirta itself was a most pleasing place with good pasture land and its giant velvet green slope reaching to the summit of Conachar, the highest sea cliff in Britain. In the strange northern light every stone on the hill side appeared almost luminous. There was a row of houses with chimnies [sic] smoking and people with many dogs were hurrying to the shore. A group put out to meet us in a heavy rowing boat.

‘Going ashore we met the people who were most courteous and friendly. Some of the women were wearing dresses of dark blue serge with beautifully cut tight fitting bodices and full skirts, most elegant and tartan squares on their heads in place of the heavy shawls worn on the Long Island (Uist). The women were the spinners and the men were weavers. This wool is from the brown or murrit sheep which are on the neighbouring island of Soay, a peculiar breed, and they must have been there when the Norsemen came more than a thousand years ago, for Soay means “Sheep island” in Old Norse. Such a name would not have been bestowed unless there was something unusual about the sheep on that island. They are more like goats than sheep and Peigi Macrae had taught me a Gaelic song beginning:

The foot of the Hirta sheep, that was the nimble foot.
That was the elegant sheep, the colour would grow on her.
She would need neither lichen nor soot, but spinning the wool to make trousers.

‘I was asked by a Mrs Gillies to come in by her fire. She was wearing a tartan square about her head which was most becoming. I thought she might have woven it herself but when I asked she replied, “Do you know Cowcaddens in Glasgow? That’s where they come from and I can give you a nice new one”. But her own had faded to such soft and pretty shades that I said I much preferred it. This made her laugh and she took it off her head and gave it to me. It is still a prized possession.

Article extracted from a full-length blog on the NTS website, which you can read here.