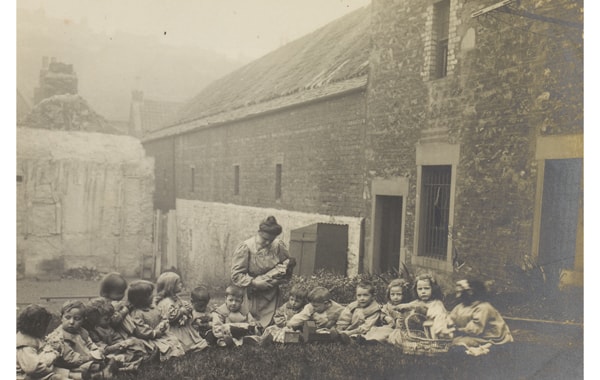 Aileen with a group of kindergarten children

Susan Gardner celebrates the achievements of Edinburgh's Lileen Hardy, a remarkable woman who dedicated her life to improving the lot of some of the city's poorest children.

Lileen Hardy (1872-1947) was a pioneer of the Kindergarten movement who dedicated her working life to improving conditions for some of the poorest children in Edinburgh. Although she was just one of many women involved in philanthropic work in the early 20th century, she made a lasting impression and her educational theories are still quoted as examples of best practice today.

Miss Hardy was one of a growing number of middle class women obliged to earn a living. She trained as a kindergarten teacher at the Sesame House for Home-Life Training in London in 1899 and must have been inspired from then on to set up a kindergarten of her own. In order to earn some money, she moved to Edinburgh to work as a governess for the family of the Rev. Alexander Whyte and his wife Jane.

Living in Edinburgh, Miss Hardy would have heard about the Free Kindergarten which opened in the Canongate in 1903 – the first of its kind in Britain. The Canongate was an over-crowded and run-down area of Edinburgh’s Old Town, once home to the gentry but, by the early 1900s, a neglected slum. Whilst most of the adults were in employment of some kind, and older children were at school, toddlers were often left to fend for themselves. It was the plight of these small children that led to the establishment of the Free Kindergarten.

With the help of Father Albert Laurie, Rector of Old St. Paul’s Church in the High Street, Miss Hardy established a second kindergarten in the Canongate. The Rector, who was very active in helping local families, arranged for the use of the church’s mission hall and even selected the children to attend. ‘He chose the best families for a beginning, and though the people are very poor, the children are mostly clean considering the circumstances’ (1). St. Saviour’s Child Garden opened on All Saints’ Day, in November 1906 with just three children.

For almost a year Miss Hardy ran the growing nursery single-handedly and was sorely in need of help. She was aware that she couldn’t provide professional training but believed that working with the children would be a valuable experience. ‘A kindergarten is an ideal field for a woman’s self-development. In no branch of the world’s work is there anything more satisfactory, or encouraging, or beautiful, or which evokes more from a woman and enables her to give more of herself.’ (2)

She certainly devoted a huge amount of her own time and energy, even living on the premises when the nursery moved to a building of its own in 1908. She said, ‘I want the house to be a home, theirs and mine, and it will be much more possible there than in the Mission Hall. They shall do housework for me, and see something of the way in which a lady lives.’ (3)

Another advantage of the new house was that it had a sheltered garden with an open view to Salisbury Crags. Here the children could grow plants and flowers, keep pets and play games. Miss Hardy was given advice on designing the garden by Professor Patrick Geddes, the town planner and sociologist.

She may have met him through her former employers who were part of the circle involved in his many projects, such as the Edinburgh Social Union. These connections were very useful for raising awareness of the kindergarten and appealing for funds.

The Diary of a Free Kindergarten

One fund-raising project was the publication of The Diary of a Free Kindergarten in 1912. This was based on letters written by Miss Hardy to friends and supporters describing the daily routines of the children, outings and celebrations and her impressions of their behaviour. The foreword was written by Kate Douglas Wiggin, the American educator (and author of Rebecca of Sunnybrook Farm).

Earlier, in 1909, Miss Hardy produced a hand-made publication called The History of a Slum Child. The story of a fictional child, intended to prick the consciences of those more fortunate, it begins ‘This is the story of “a nameless lassie” nursed by her unhappy mother’s unhappier mother.’ (4) Lileen Hardy’s passionate belief in the need to care for these children shines through in her appeal –

“To those who love the nation, who wish Scottish grit & fibre to last, who think of the generations to come, who are lovers of children. Those human documents gathered on the spot – without arrangement – haphazard – as the chance came, on an ordinary day in the Canongate of Edinburgh, are presented for consideration (yes! and for humbling and shame!) in the hope that an experiment, not made with chemicals in bottles, but with the bodies and souls of posterity, may be furthered and, if the mercy of God permit, fulfilled.” (5)

The kindergarten movement did flourish in Edinburgh with another three opening by 1913 and a further nine by 1937. Lileen Hardy stands out amongst them all in her single-minded devotion to the neglected children of the Canongate, living in their community, befriending their parents and families and demonstrating a better way of life by personal example. She remained in charge of St. Saviour’s Child Garden until she retired in 1927.

For much more history, subscribe to History Scotland magazine today and receive your first 2 issues for just £2! Enjoy Scottish history at home and have your magazine delivered straight to your door while saving money. Click here to claim this offer.

The Diary of a Free Kindergarten by Lileen Hardy

Susan Gardner is a curator at the Museum of Childhood.