Hogmanay is always a big day for Scots, particularly so for one of the most famous Scots of all time – Charles Edward Stuart or, as he was perhaps better known, Bonnie Prince Charlie. That’s because it was his birthday, and 31 December 2020 marks the 300th anniversary of his birth.

The National Museum of Scotland has many important objects connected with the Prince which tell his story and that of his supporters, the Jacobites.

Charles was not born in Scotland, and indeed only spent 15 months here during his ill-fated attempt to reclaim the kingdom of Great Britain and Ireland (as was) for his Stuart line. His grandfather was a King, James VII and II (of Scotland and England respectively), who had been forced from the throne and into exile due to his  Catholicism  particularly once the birth of an heir raised the prospect of a Catholic dynasty.

This monogrammed ring was given by the deposed King James VII and II to a loyal supporter on the night he escaped London, never to return. 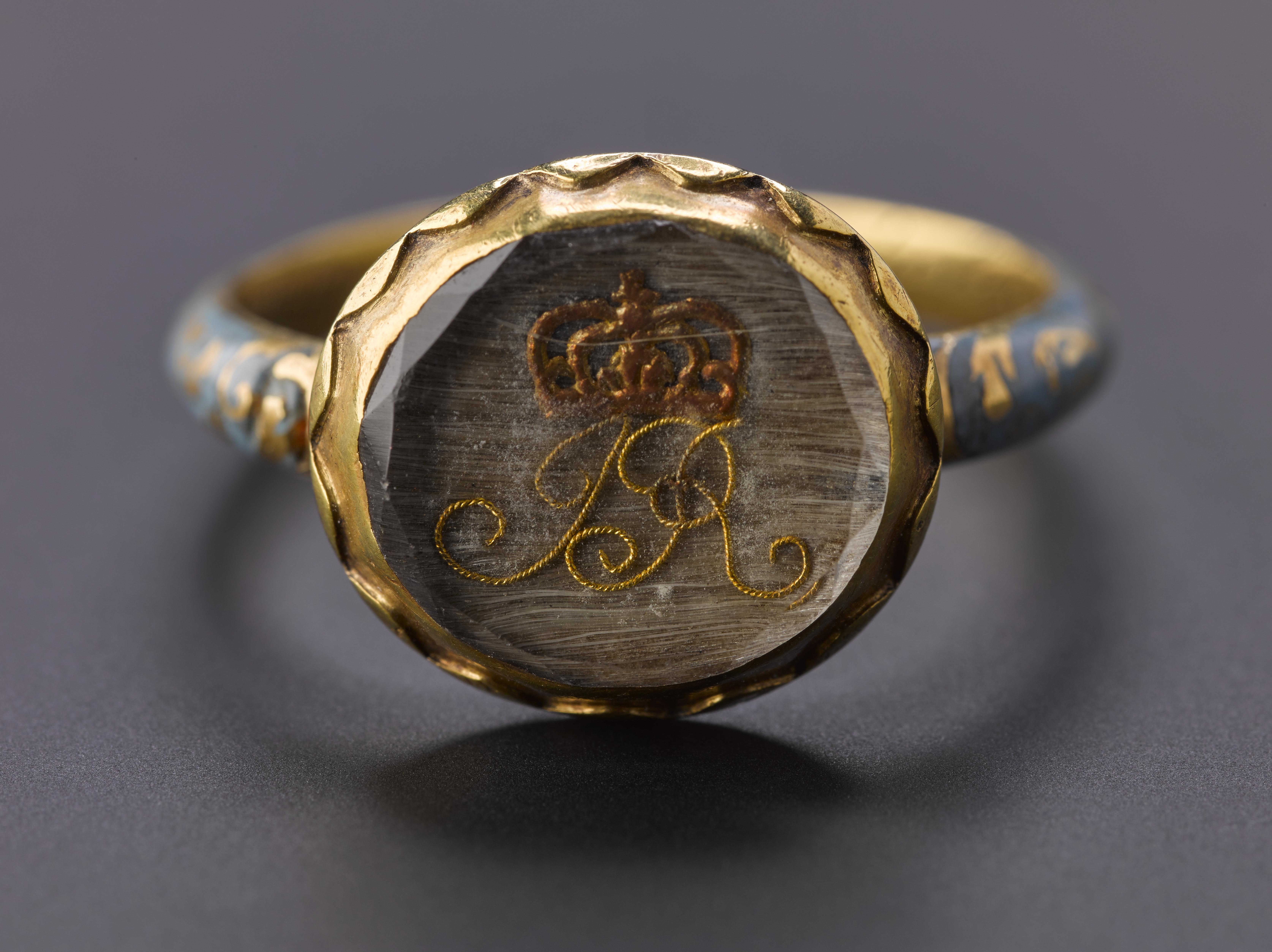 Gold and enamel finger ring inset with monogram JR and crown, given by James VII and II to Sir Peter Halkett the night he fled from London in 1688

That heir, also James, was Charles’ father. He was recognised in exile by Louis XIV as James VIII & III. However, despite numerous attempts, he never came close to reclaiming his throne.

The inscription on the blade of this broadsword, made around 1715 – the year of one of the more significant Jacobite challenges - proclaims support for his cause. The inscription reads: ‘Prosperity to Schotland and no Union’ and ‘For God my Country and King James the 8’. 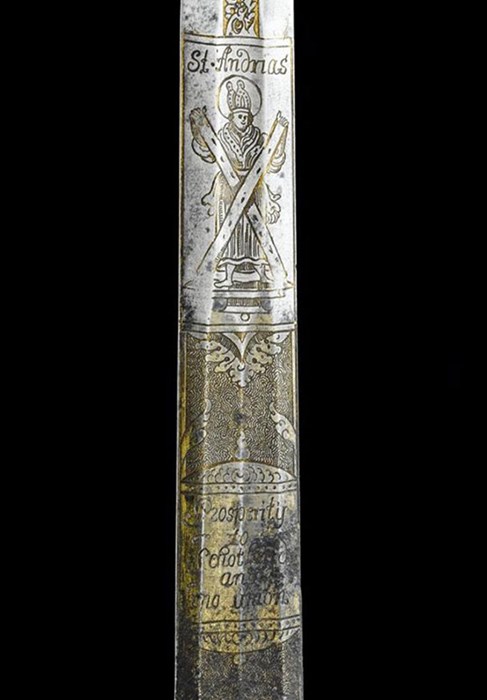 Broadsword with inscription: ‘Prosperity to Schotland and no Union’ and ‘For God my Country and King James the 8’

By the time of the last of those abortive attempts, James had become a diplomatic problem for the French, and he and is court had to relocate, eventually ending up in Rome, where Charles was born on the last day of 1720. Charles’ mother, pictured on this ring was a Princess – Maria Clementina Sobieski, grand-daughter of the King of Poland. 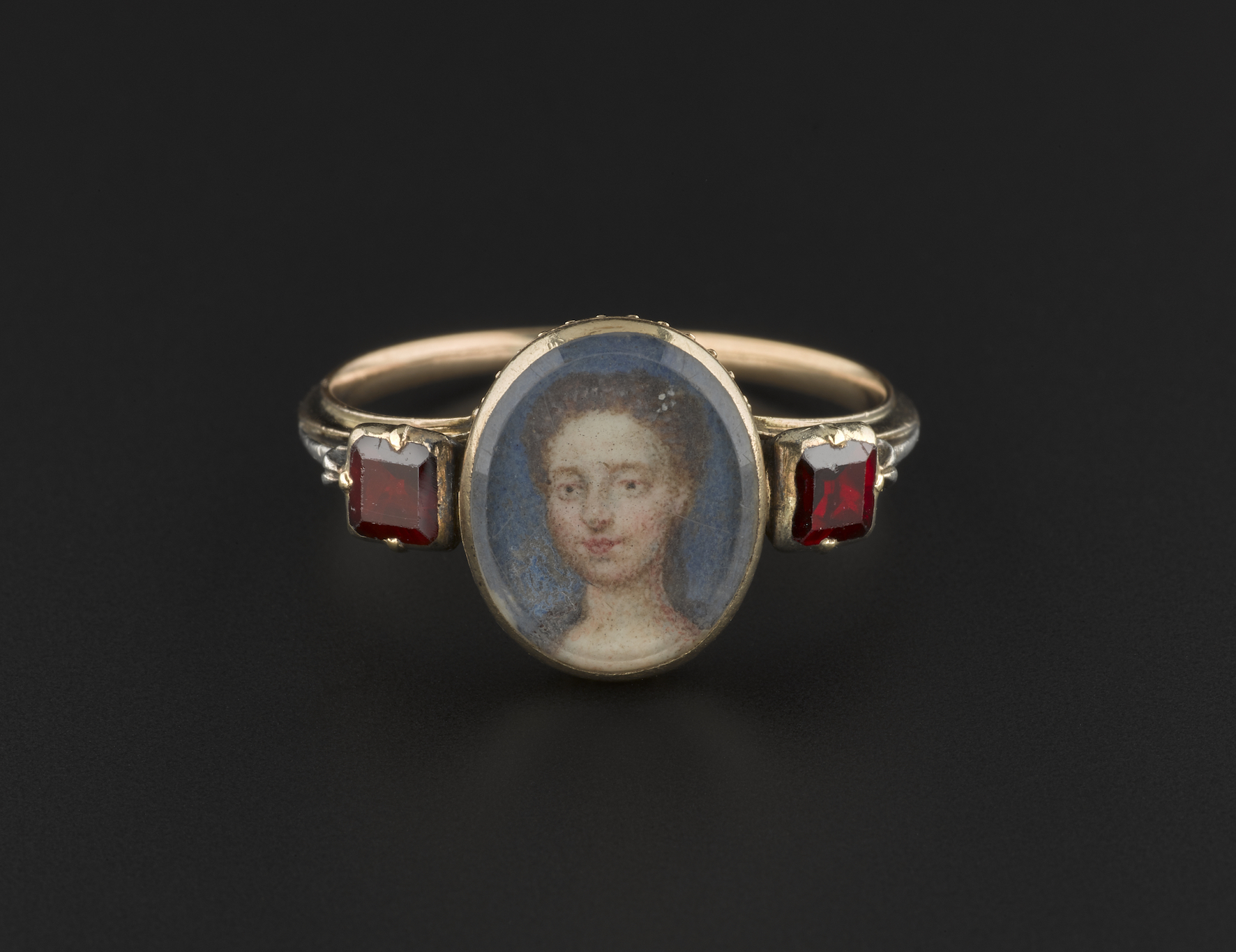 Gold portrait ring; the oval head with a portrait painted in watercolour on ivory of Princess Maria Clementina Sobieska

Charles was raised as a prince, specifically the exiled Prince of Wales and also a knight both of the Order of the Garter and of the Thistle, the premier chivalric orders of England and Scotland respectively. Supporters bore him gifts including this targe, or shield. 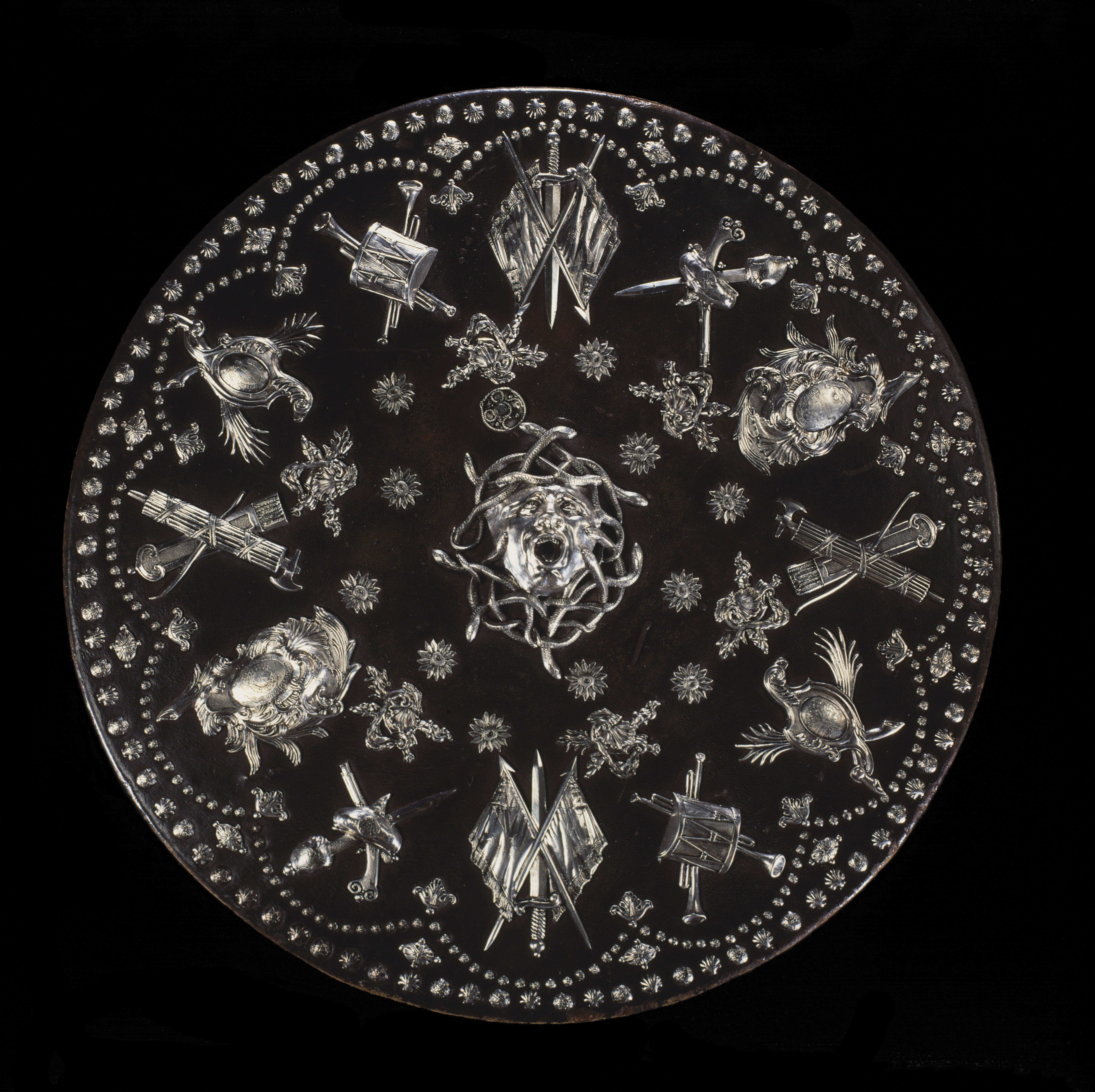 Going back to the subject of his birthday, Charles possibly received this handsome travelling canteen for his 21st birthday in 1741. 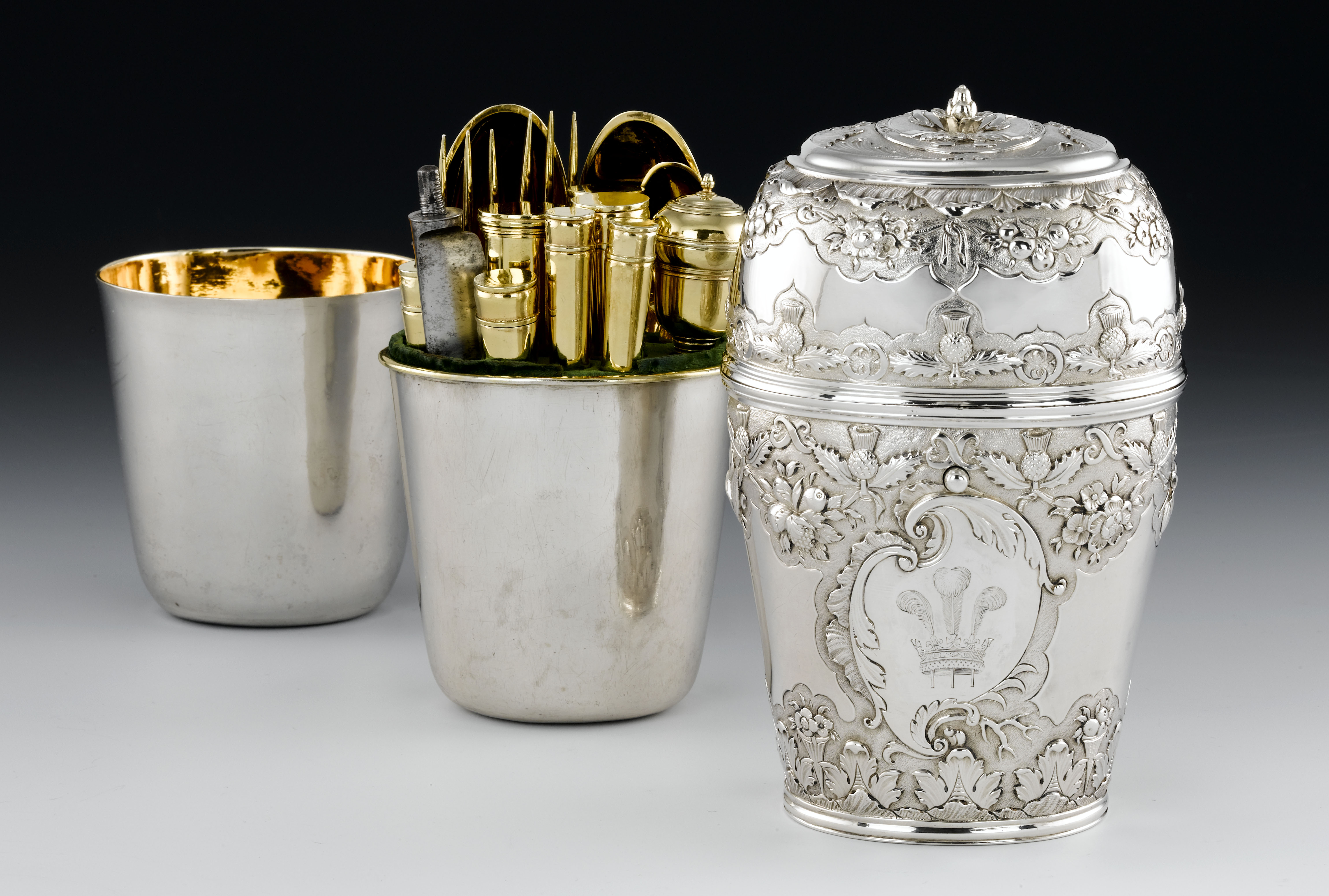 It was recovered from the baggage train at Culloden, the scene of the ultimate defeat of the Jacobite army and the effective end of the Stuart attempts to reclaim their throne. It contains all the essentials for a travelling prince – cutlery, a drinking quaich and a nutmeg grater…

Charles eventually resolved to stake his father’s claim. He arrived off the west coast of Scotland in July 1745 with a handful of men. He eventually persuaded the clans to mobilise. Following victory at the Battle of Prestonpans, a court was established at the Palace of Holyroodhouse for around six weeks. Most portraiture of Charles shows him as very much a European prince. However, there is a suggestion that he may have adopted the dress of his ancestral homeland when he was here.

This elegant tartan frock coat was in the possession of a Jacobite-supporting family for many years. The family had direct links with the prince and family provenance links it to the Prince during his time in Scotland. 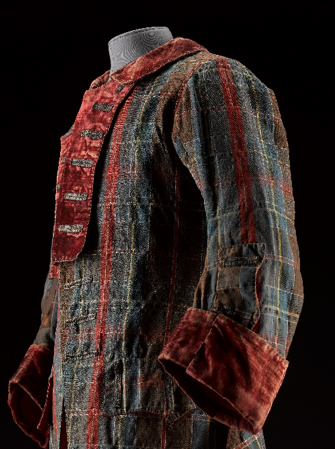 His army marched south, as far as Derby. However, anticipated support in the north of England failed to materialise and, troubled by rumours massing English forces, Charles’ commanders persuaded him to turn back. The third son of George I, the Duke of Cumberland led the government forces which pursued Charles in his reluctant retreat north, eventually to the shattering conclusion at Culloden, where the Jacobite army was beaten and routed in less than an hour.

These regimental standards were borne at the battle, their respective condition perhaps reflecting the fortunes of the two armies. 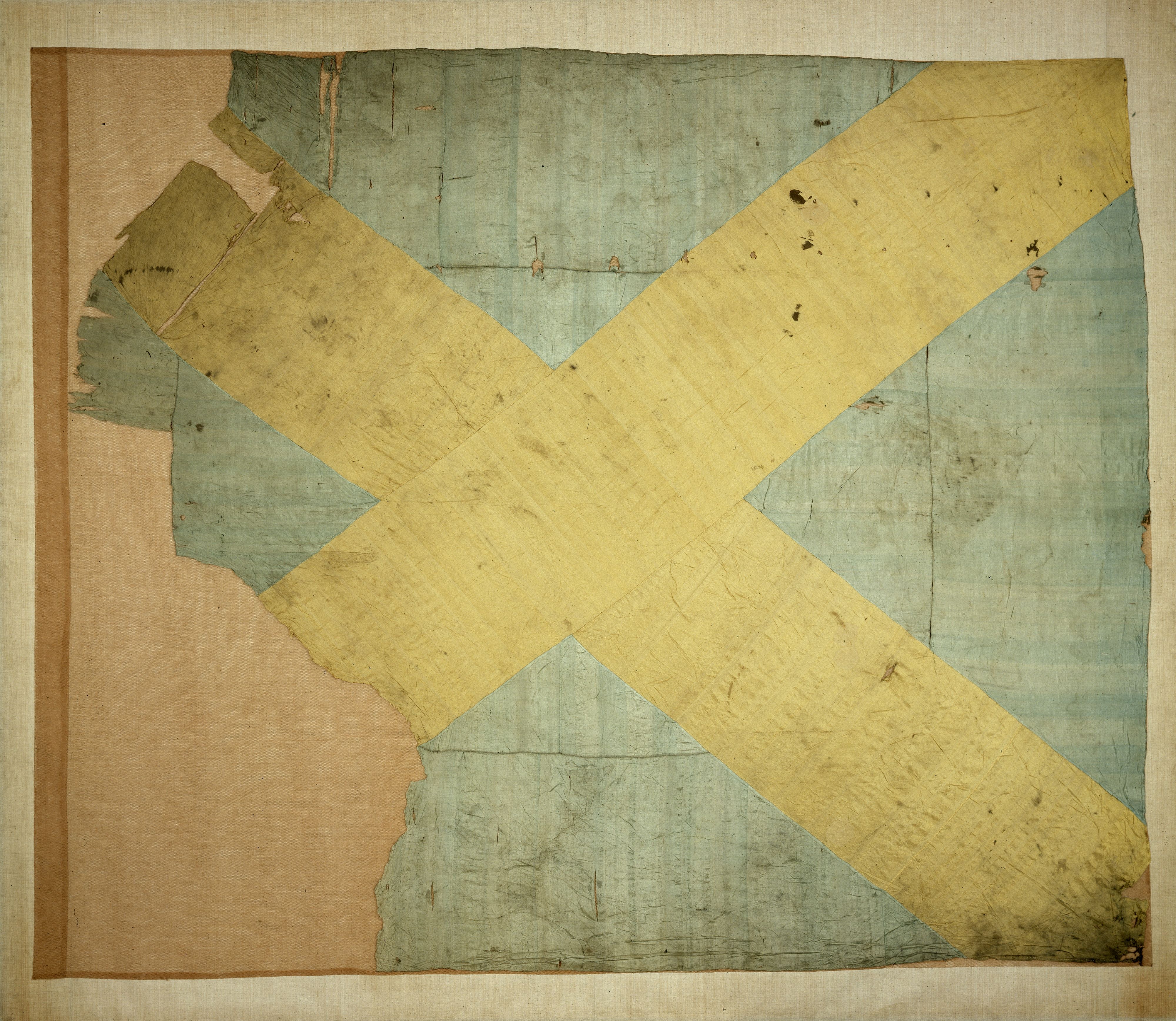 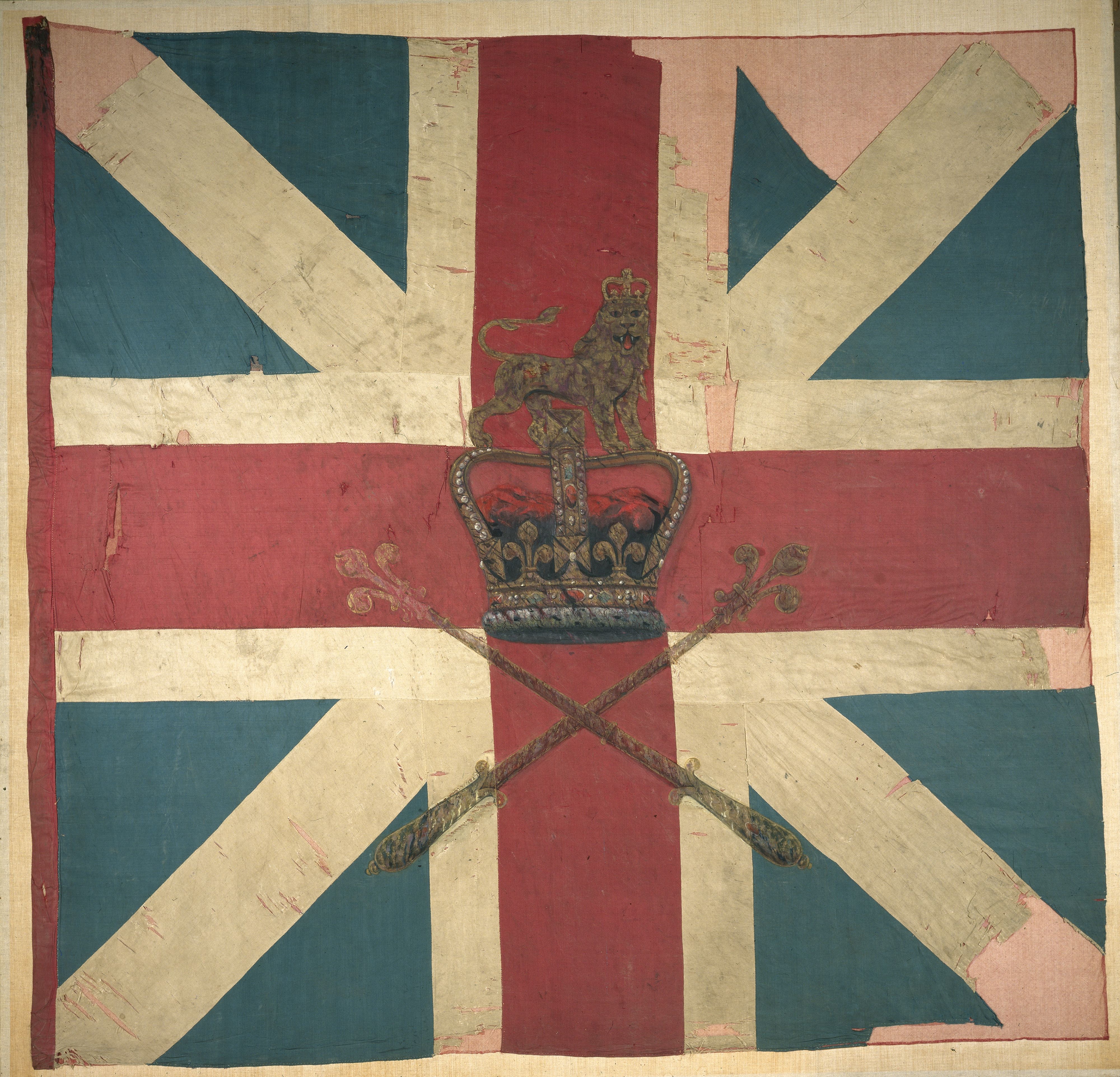 Despite these flags, Culloden was not, as it is sometimes characterised, a battle between Scots and English. There were English soldiers in the Jacobite army, as well as Irish and French, whilst Scots fought on the government side, even including Highlanders.  The brutal aftermath was felt most acutely in Scotland, though. The Hanoverian Government was intent on dismantling the infrastructure and the culture of rebellion – the wearing of the plaid (tartan) was banned among men and boys, the Gaelic language was suppressed, the lands cleared.

Charles, meanwhile, fled the country in famously convoluted fashion, pursued across the Highlands for months before finally returning to exile in Europe.

Charles had a younger brother, Henry. This miniature shows them together in their younger days. 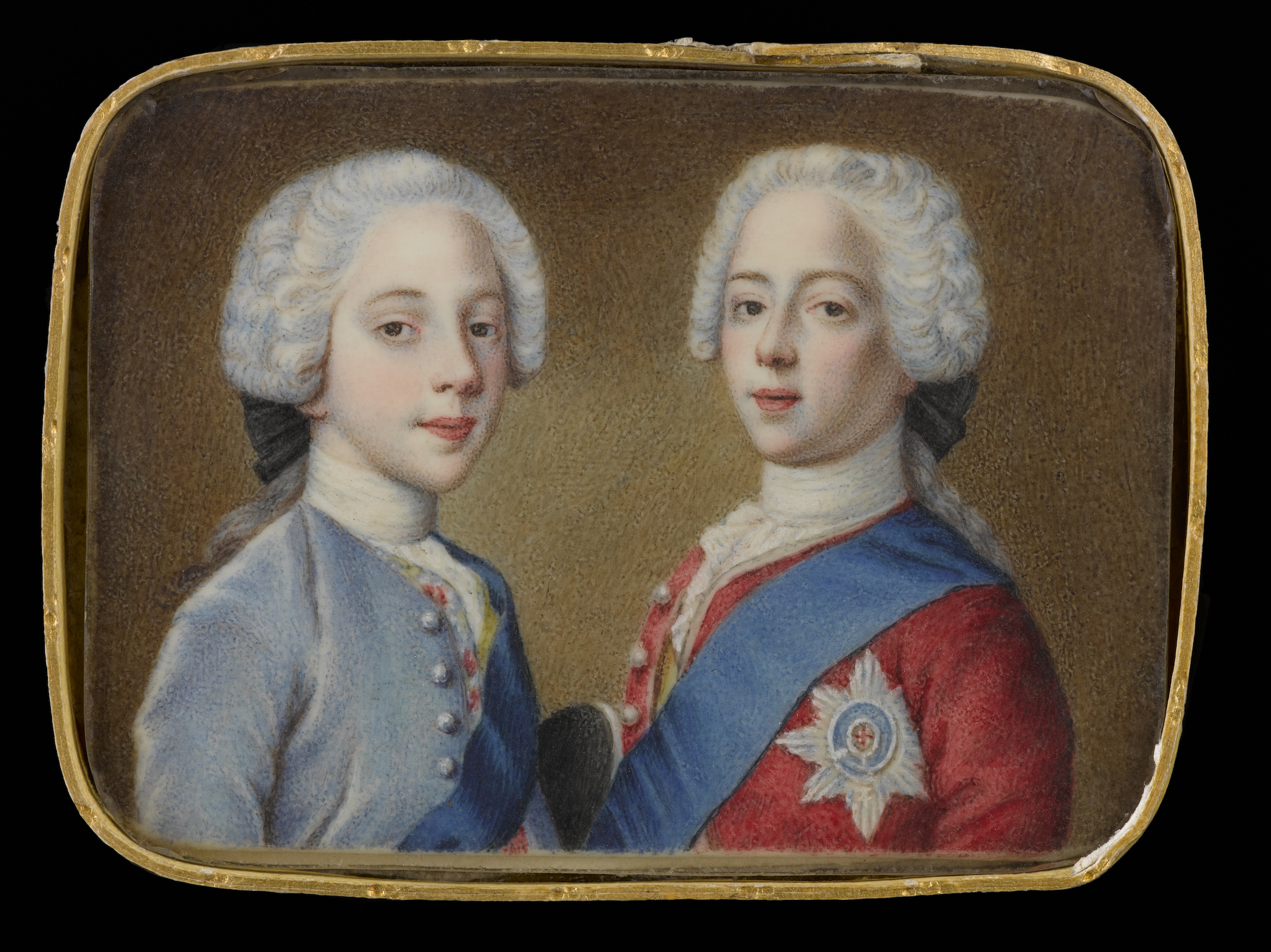 Henry supported his father’s claim and was briefly attached to the French army, but no French force joined the 1745 uprising. In 1747, Henry became a Cardinal in the Catholic church, much to Charles’ horror as this open affiliation destroyed any chance he might have had of gaining wide support in Britain for any further challenge to the throne. Charles was furious with his father who had orchestrated the move, and never spoke to him again. Henry served the Church for the rest of his days, outliving his brother by 19 years. He never did renounce the Stuart claim though -  after Charles death in his own household, he was referred to as Henry IX of Britain and Ireland.

Robert Burns, Sir Walter Scott and countless others memorialised and romanticised the Jacobite story almost immediately. In fact this letter from the Bard is an acceptance of an invitation to attend a dinner honouring Charlie on Hogmanay 1787 – Charles was still alive at that point. It reflects the fact that Jacobitism was already passing into romantic memorial, even during Charles’ own lifetime. 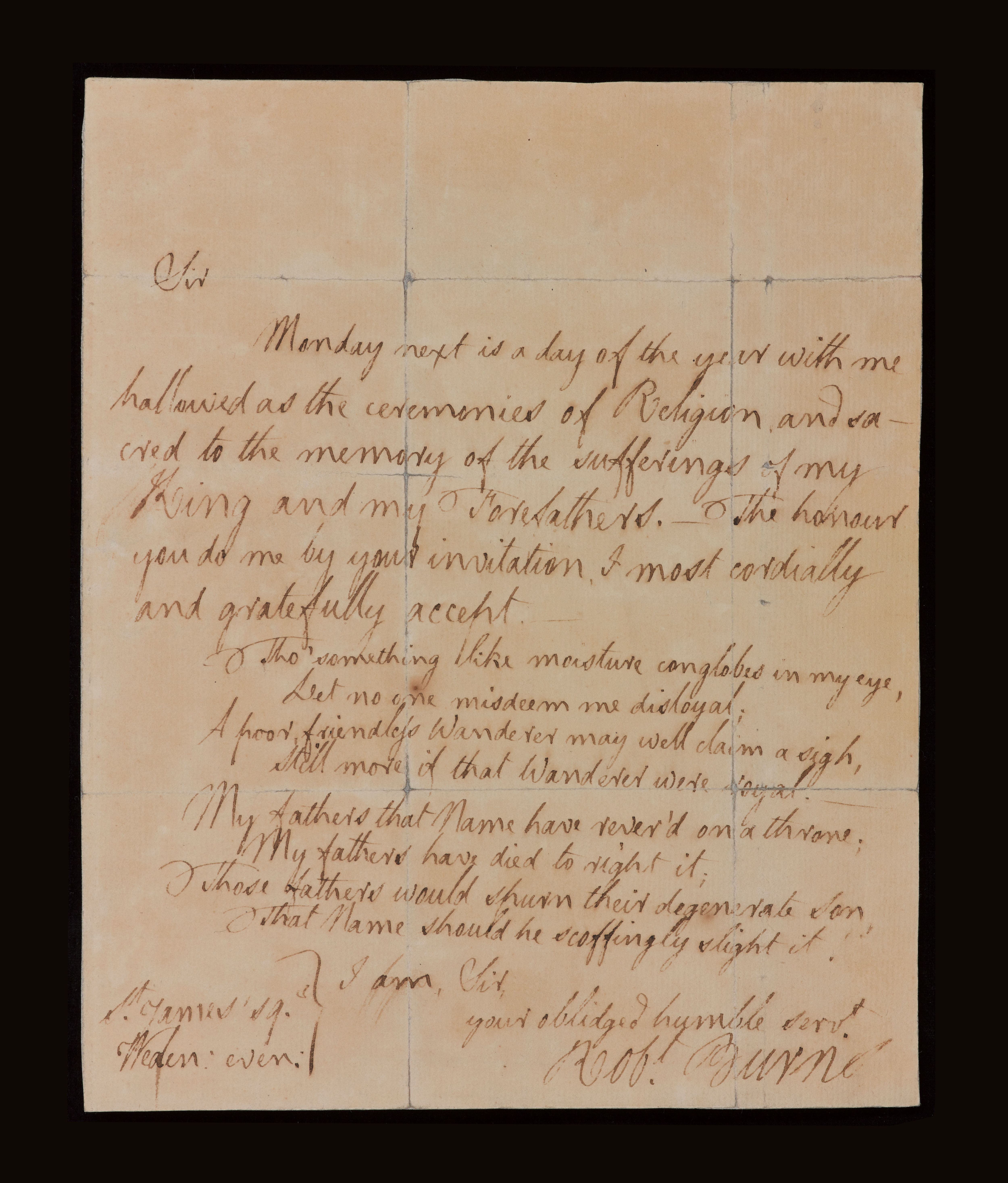 At such dinners, and on other occasions, men who fancied themselves as Jacobites would continue to toast ‘the Kings across the water’, using ‘Amen’ glasses like this. However, the seditious danger such a gesture would once have represented had long faded by the time of Charles Edward Stuart’s death in 1788. 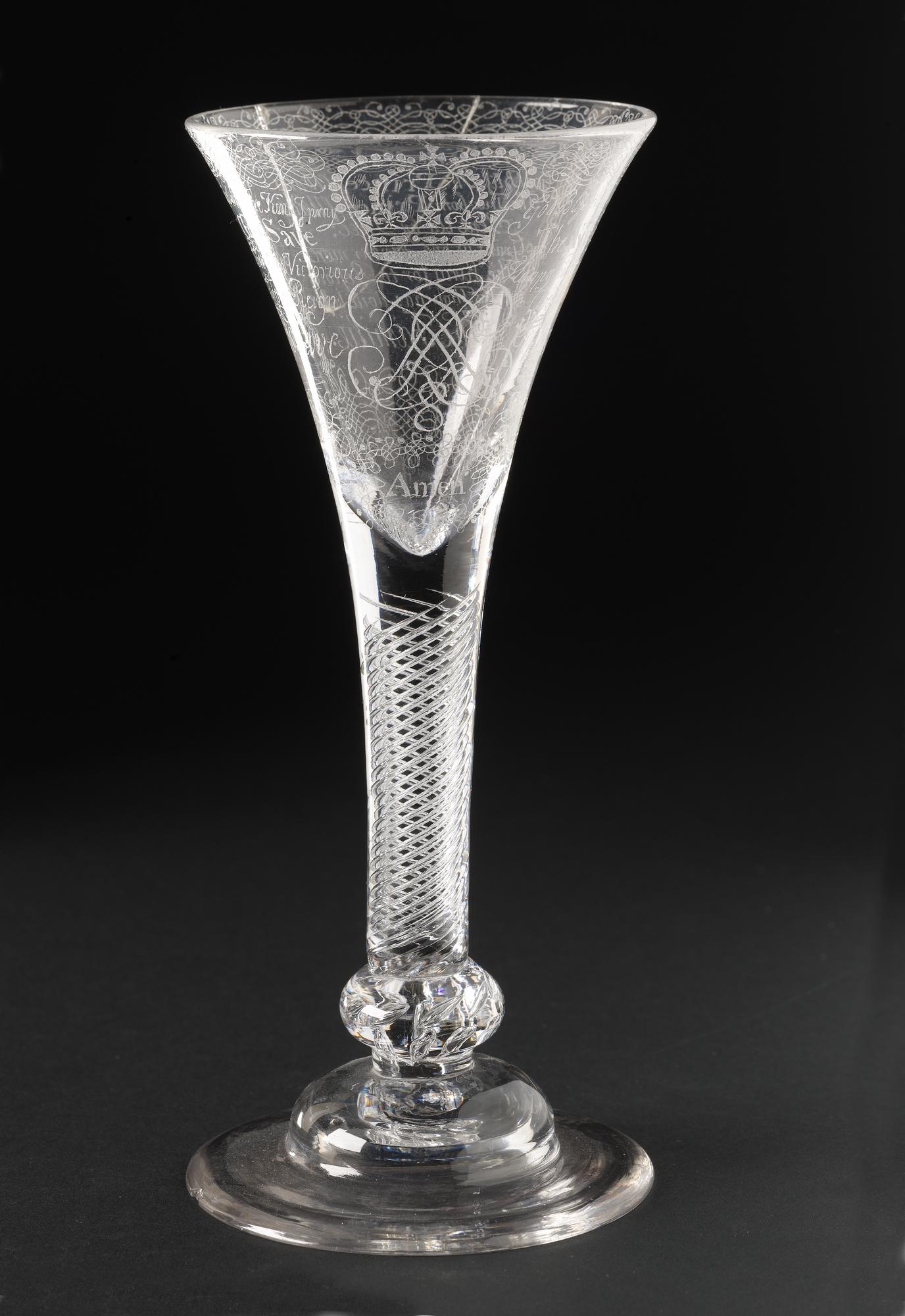 Explore the story of Bonnie Prince Charlie at National Museum of Scotland in Edinburgh and online. At the time of publication (30 January 2020) the museum is closed until further notice. You can explore the Jacobite collections at the NMS website. 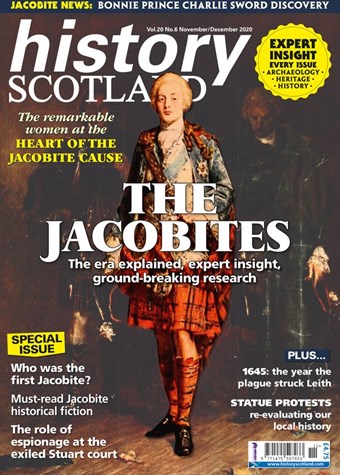 For more on the prince and the Jacobites, read History Scotland's special Jacobite issue, available to download now.