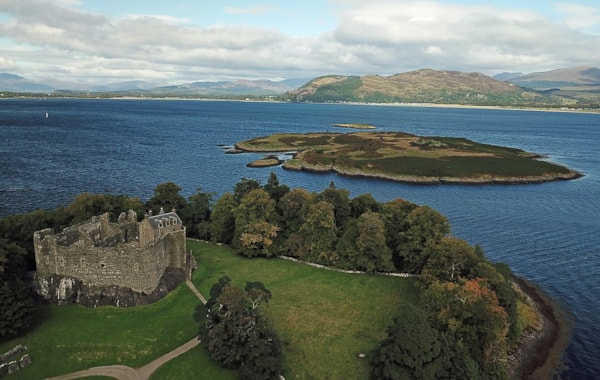 The director remembers growing up in Highland Perthshire and being dropped off by his mum south of Dalwhinnie to hike home – and returning to the same spot more than 30 years later to film Chris Pine (Star Trek) as Robert the Bruce, King of Scots.

The VisitScotland video, Outlaw King: In conversation with director David Mackenzie, was filmed at Dunfermline Carnegie Library & Galleries at an exclusive screening of Outlaw King in the shadow of Dunfermline Abbey, the resting place of Robert the Bruce, which doubled as Westminster in the film.

The filming of Outlaw King

Outlaw King charts the story of Robert the Bruce from defeated nobleman in 1304 to victorious king of Scots at the Battle of Loudoun Hill in 1307. It was released globally on streaming platform Netflix to its 130 million subscribers in more than 190 countries on Friday, 9 November last year.

Shot entirely in Scotland (according to the borders of 1320), Outlaw King remains the largest production to be made in the country to date, featuring locations and attractions such as Craigmillar Castle, Blackness Castle, Linlithgow Palace, Glen Coe, the University of Glasgow and the Isle of Skye.

Historic Environment Scotland and the National Trust for Scotland, which own historical properties that appear in Outlaw King or have links to Robert the Bruce, say the film has been a factor in a rise in visitor numbers over the past 12 months.

VisitScotland produced an interactive online guide, On the trail of the Outlaw King, highlighting 20 film locations and 24 sites linked to Robert the Bruce across the country.

The top three most popular destinations on the map are:

David Mackenzie, director of Outlaw King, said: “It was a great responsibility to try to tell the story of one of the great Scottish national heroes, if not thee great Scottish national hero, and to do him justice while making a film of integrity that tells an element of the story of his life. That was at the forefront of everything that we were doing all the way through.

“It was really important to us to use as many sites as possible that Robert himself had a connection with. Treading in these hallowed places and feeling that your feet are on the same ground that these guys were on 700 years ago is a really resonant thing; for me, as a director; for the actors to get into their part; and for everyone on the film set.”