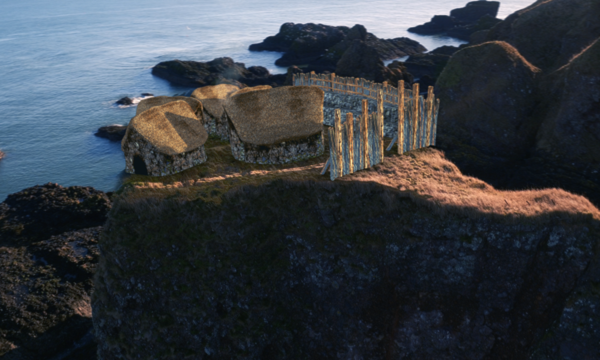 Archaeologists investigating a substantially eroded sea stack near the site of the ruined Dunnottar Castle in Aberdeenshire, which itself was a later Pictish power centre, uncovered evidence of a third or fourth century promontory fort.

The new video, funded by Historic Environment Scotland, illustrates how the fort may have looked if the sea stack, called Dunnicaer, was still connected to the mainland.

The archaeologists required help from experienced mountaineers to scale Dunnicaer, a rocky outcrop off the Aberdeenshire coast, which measures at most 20 x 12 metres with sheer drops on all sides.

QUICK LINK: Digital reconstruction of lost medieval home of Lords of the Isles

The team discovered partial remains of houses on the cliff edge, which shows that much of the settlement had fallen into the sea.

They found turf and timber structures and preserved floor layers and hearths. Some of the hearths were built on top of one another which also suggests space is likely to have always been restricted on the site. The inhabitants had connections to the Roman world with Roman pottery and glass found on site.

It appears the site was abandoned in the late fourth or early fifth century. The settlement may have shifted to Dunnotar, which was an elite centre of Pictish society by the seventh century.

The site came to prominence in 1832, a group of youths from Stonehaven scaled the sea stack and found a number of decorated and carved Pictish symbol stones, some of which they had thrown into the sea and had to be recovered. Pictish symbol stones are a unique tradition of carving that may have denoted high status names. The radiocarbon dates for the settlement suggest that these stones may be amongst the earliest in the carving tradition.

“We always knew that Dunnicaer was a site of major significance but carrying out an archaeological survey was hampered by the inaccessibility of the site. Thanks to the help of mountaineering experts, we were able to carry out some extreme archaeology!

“It is plausible that, although already in an eroded state, the outcrop would have been significantly bigger in the time of the Picts, making it a suitable site for a settlement.

“This video helps to fully visualise how the fort may have looked in the fourth century which we think helps to further bring to life the lives of the Picts, who are so poorly understood because of the lack of historical records.

“We’re so glad we have been able to do the dig on Dunnicaer at this time. Coastal erosion is a huge threat to archaeological sites of this kind and the remaining stack will continue to erode.”

Report and images courtesy of University of Aberdeen