Who's Buried Where in London - five remarkable Scots The outstanding tomb of Mary, Queen of Scots (1542–87) was erected by her son James I. Mary was a Catholic and a great threat to Elizabeth I, who had her captured, imprisoned and, eventually, executed. Her tomb is even grander than Elizabeth’s.

Emigrating to Australia in his twenties, he carried out six expeditions to explore and survey its interior. He was the first person to cross the country from south to north, for which he was awarded £2,000. Several geographical features are named after him, as well as the Stuart Highway, which follows his route across the country. The obelisk was damaged by a bomb in the Second World War, and it was replaced in 2012.

Buried in the north- west corner of the church is the Scottish poet James Thomson (1700–48), who lived in Richmond in his later years. His most important work is The Seasons, but he is best known as the author of Rule Britannia, which was set to music by Thomas Arne. The fine brass plaque on the west wall was added in 1792.

On the inner wall of St Paul's Cathedral is an elegant marble plaque to Sir Alexander Fleming (1881–1955), who discovered penicillin while working at St Mary’s Hospital in Paddington, for which he was awarded the Nobel Prize for physiology.

The cross pictured above marks the grave of John Murray (1778–1843), one of the most influential publishers of his time. Taking over his father’s business in Fleet Street, he was soon able to move to Albemarle Street, where he entertained important literary and political figures.

He published authors such as Jane Austen, Sir Walter Scott and Coleridge, and had a particularly close relationship with Lord Byron, who became a star overnight when Murray published the first two cantos of Childe Harold’s Pilgrimage. However, Byron’s posthumous memoirs proved so controversial that Murray burnt them, a great loss to posterity. 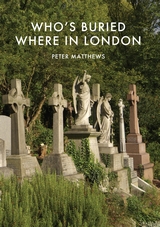 Who's Buried Where in London by Peter Matthews, published by Bloomsbury Shire, is the perfect read for family historian ‘tombstone tourists’. For many of us, there’s nothing better than whiling away a summer’s day in a Victorian cemetery or old parish graveyard. If this strikes a chord with with you, then the delightfully informative Who’s Buried Where in London is right up your street.

Researched and written by Peter, a former London Tourist Board employee and Blue Badge Guide, this richly illustrated handbook to the capital’s many cemeteries, churches and graveyards is packed with information on the vast range of memorials worth a visit, and fascinating biographical details of those laid to rest there.