Edith of Dunfermline - the life of 'Matilda of Scotland' 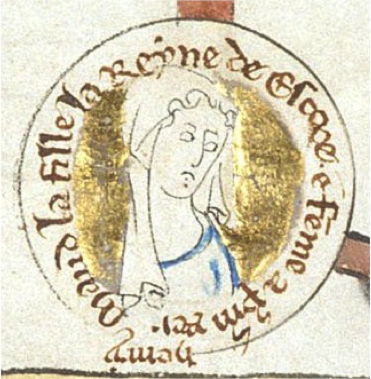 The 1st of May 2018 marked the 900th anniversary of the death of a remarkable Dunfermline-born woman, Edith, who became known as Matilda of Scotland, writes Bruce Manson.

The 1st May 2018 marked the 900th anniversary of the death of a remarkable Dunfermline-born woman, Edith, writes Bruce Manson.

She is known to us by the more fashionable Norman-French title “Matilda of Scotland”. Born around 1080, Edith grew up in the Scottish court of her parents, Malcolm III and Margaret. She is not as well known in Scotland as her brothers David and Alexander, but had a profound impact upon the world beyond her native land which she left while still a child.

As a Scottish princess whose mother had escaped from the Normans it may seem strange that her godfather was Robert Curthose, the son of William the Conqueror. However, her parents and their advisors must have accepted the permanence of the Norman regime as well as the need  to secure her mother Margaret’s Wessex bloodline. It is recorded that at her christening she tugged at the veil of Matilda of Flanders, Robert’s mother, a sure portent that one day she would be queen.

Thus with links to three different cultures, Anglo-Saxon, Scottish and Norman French, Edith was a marriageable prospect, but her eventual betrothal to Henry I of England seems, by all accounts, to have been a love match as much as a dynastic union.  She was free to marry only after a court case at which she had to prove that her stay in a convent was for purposes of protection and that she never formally took the veil of a nun.

The character, education and birthright of Matilda of Scotland seem to have given her a high degree of autonomy at Henry’s court. She also had her separate sources of income, her own retinue of staff and was frequently left in virtual charge of the realm during his regular absences in Normandy. Her charters cover a wide range of issues and she was particularly interested in architecture, being responsible for several abbey building projects as well as bridge construction and the provision of England’s first public toilets, attached to a bath complex near the centre of London at Queenhithe.

It is possible that in 1114 she sent masons north with her brother Alexander when he returned to Scotland after fighting alongside Henry in Wales. She herself was said to have “fluent honeyed speech” by Marbodius of Rennes and she filled her court with poets and musicians. She was responsible for commissioning a biography of her mother Margaret who was also renowned in Scotland for bringing light and colour to the Scottish Royal Court.

It is believed that Matilda (Edith) only returned once to Scotland during her lifetime and, due to the lack of surviving documentary evidence, her influence in Scotland is unknown. However, she is believed to have had a close relationship with her brothers, three of whom were kings north of the border. Absent from our history books, she may just possibly be better known to us as the “fair lady” in the nursery rhyme “London Bridge is falling down”. Her works of charity made her a queen beloved of all Londoners who also probably claimed her as a Wessex girl despite her Scottish birthplace.

Matilda of Scotland fulfilled her dynastic duty by giving birth to both a daughter, also called Matilda, and a son, William. William died in a tragic boat disaster shortly after Matilda’s own early death in 1118. She was only 38. Her daughter Matilda married the German Emperor Henry V and is known to us today as the Holy Roman Empress Matilda, the princess who became embroiled in a bitter English Civil War.

Bruce Manson is also the author of Fife, Why a Kingdom? produced for Fife Council as well as numerous articles and research papers on local historical themes. He is continuing with phase two of the church project and is currently tracing the routes taken by pilgrims through central and southern Fife.