A set of rare embroideries worked by Mary Queen of Scots and Elizabeth Talbot, Countess of Shrewsbury are back on display at the National Trust’s Oxburgh Hall in Norfolk for the first time in three years.

The hangings, created between 1569 and 1584, were moved by textile conservation specialists into storage where they were kept during Oxburgh’s roof restoration project (2019-2022). On long-term loan to Oxburgh Hall from the V&A in London, among this set of finely-crafted embroideries is the work of Mary Queen of Scots, during her imprisonment in England, and Elizabeth Talbot, popularly known as ‘Bess of Hardwick,’ the Countess of Shrewsbury. They include a panel known as the Marian Hanging, as the emblems are strongly associated with the queen.

Elizabeth I of England considered Mary a threat to the throne and kept her captive for eighteen years, much of which was spent under the watchful eye of Bess of Hardwick’s fourth husband, George Talbot, Earl of Shrewsbury. It is a common misconception that Mary was imprisoned at Oxburgh Hall, but this was never the case.

In 1572, Thomas Howard, Duke of Norfolk was found guilty of plotting to assassinate Queen Elizabeth and place Mary on the throne, for which he was executed for treason. The evidence against him included the embroidery that now forms the centerpiece of the Marian Hanging, whose emblem of a hand holding a pruning hook and cutting back a vine to make it more fruitful was seen as offering encouragement to the duke in his treasonable intentions. 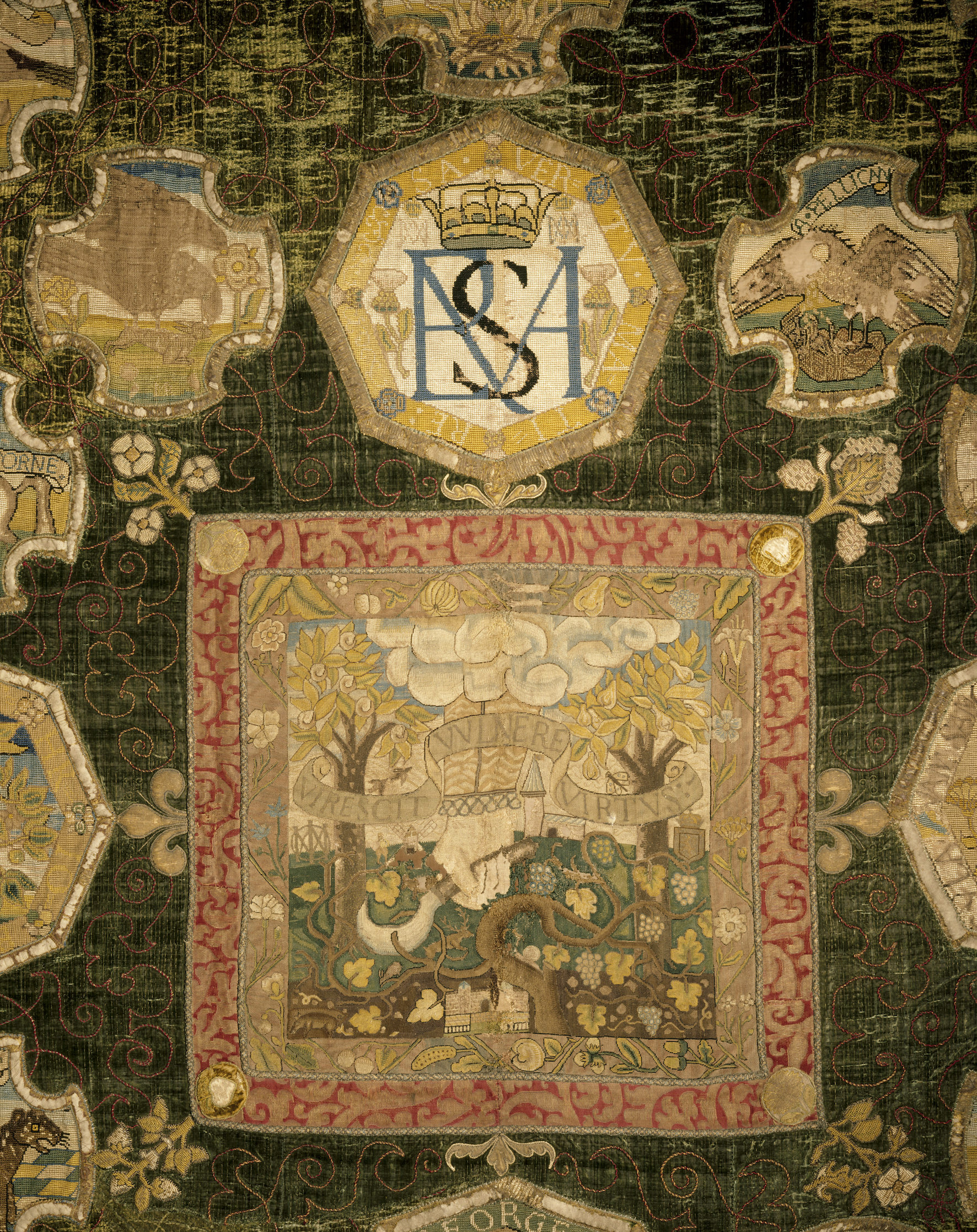 Embroidery was not only a pleasurable pastime, but a form of communication for Mary. The motifs expressed Mary’s most private thoughts, at a time when all her written correspondence was being monitored by her captors. The precise message remains unclear, but there are said to be several incriminating emblems within her needlework, which were cited as evidence that she was involved in Catholic plots to unseat Elizabeth.

Passed down through descendants, it was the marriage of Mary Browne, of Cowdray Park, to Sir Richard Bedingfeld that would result in these historical treasures making their way to Norfolk. This probably saved the hangings, as shortly after Cowdray Park was largely destroyed by fire. The 9th Baronet sold them to the National Art Collections Fund who presented them to the V&A. Still remarkably vibrant after 450 years, they are housed in a special environmentally controlled room and are arguably the most significant items on display at Oxburgh Hall. 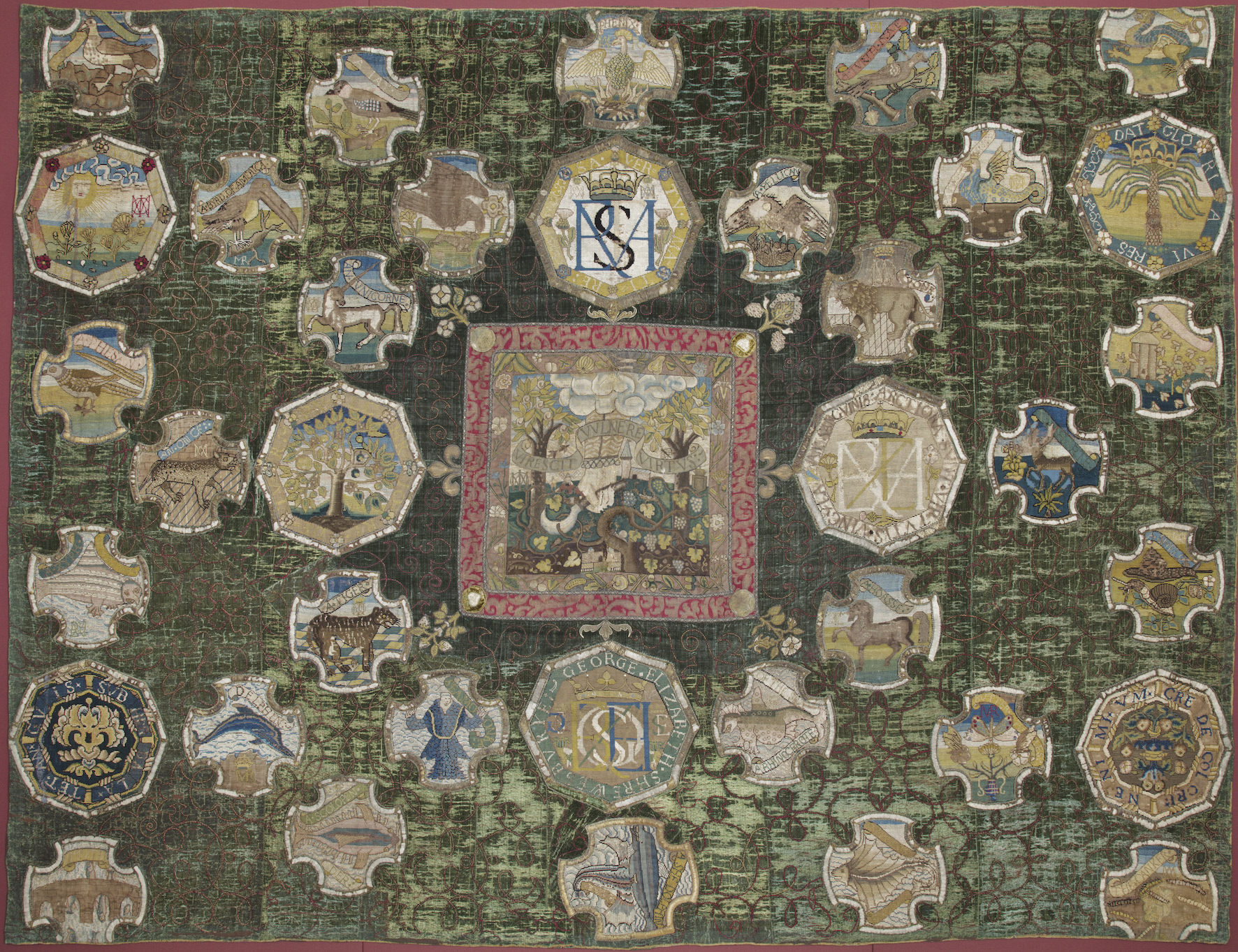 Donna Baldwin, General Manager at Oxburgh Hall, said: “We are delighted to have the Marian Hanging back with us after all these years. The embroideries are significant and beautiful works of art, and they tell the story of an important historic moment. The hidden messages within the hangings are very clever and visitors enjoy trying to discover the intriguing story for themselves. We look forward to welcoming our visitors back now they are on display once more.”

Visitors can see the panels on display at Oxburgh Hall, the house is open for guided tours on Thursdays and Fridays (bookable upon arrival) and free-flow on Saturdays and Sundays between 11am-2.30pm. The whole estate, including the house, is closed between 19-28 December.