The Making of a French Queen of Scots 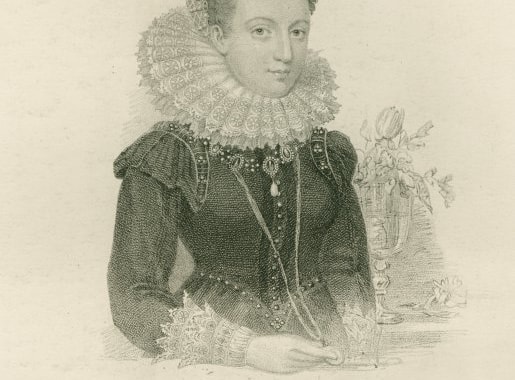 In our latest guest blog to mark the release of the movie Mary Queen of Scots, Moniek Bloks, editor of History of Royal Women, takes a look at the young queen’s time at the French royal court.

In our latest guest blog to mark the release of the movie Mary Queen of Scots, Moniek Bloks, editor of History of Royal Women, takes a look at the young queen’s time at the French royal court.

On 8 December 1542, Mary Stuart came into the world and was transformed into Mary Queen of Scots just six days later upon the death of her father, King James V. From the beginning, Mary's reign was threatened by King Henry VIII of England, who seized the opportunity to reiterate King Edward I's claim to feudal overlordship of Scotland.

He envisioned an empire that saw Mary marry the then five-year-old future King Edward VI. Of course, he expected to have Mary raised in England until her marriage. The following “rough-wooing” was a catastrophe for Scotland and only made Mary's mother realise that Mary would never be safe.

On 29 July 1548, the five-year-old Mary boarded a ship bound for France, pledged to marry the Dauphin. An army veteran who watched her departure wrote that she was, “one of the most perfect creatures that ever was seen, such a one as from this very young age with its wondrous and estimable beginnings has raised such expectations that it isn't possible to hope for more from a princess on this earth.”

After a rough crossing that lasted 18 days, Mary reached France. Luckily, Mary was not alone in France. Her maids of honour and playmates were known as the four Marys, all the daughters of leading Scottish families. Mary's governess was Lady Fleming, an illegitimate daughter of King James IV, and thus Mary's aunt. Her grandmother, Antoinette of Bourbon, was tasked with guiding the young Queen to Carrières-sur-Seine where the children of King Henry II of France were being raised.

There were then four children in the nursery; the Dauphin Francis, his sister Elisabeth and Claude and Louis, who would die before his second birthday. Four more children would be born to Henry and his wife Catherine de'Medici.

Though all were only children, the question of precedence arose. Mary was a queen in her own right, but it was settled that the Dauphin, as a male and the heir, would take pre-eminence but Mary would take precedence over all the other children. Mary's half-brother, the young Duke of Longueville, from her mother's first marriage, thought she was stunning and wrote to her mother that she was, “so charming and intelligent as to give everyone who sees her incomparable joy and satisfaction.” Her mother was thrilled to receive any news from France.

At the end of the year, Mary rose to the occasion at the wedding of her uncle Francis, the future Duke of Guise, and Anna d'Este. She spent weeks learning to perform a complex dance routine with her future husband, performed in a starched dress with jewelled embroidery. It must have been quite a sight, as Mary was unusually tall for her age, while the Dauphin was abnormally short.

Also, as of yet, Mary spoke only Scots and very little French. Not much later, Mary's household was merged with the Dauphin's, and everyone was ordered to speak French. Mary became fluent in French in under two years, just in time for a visit from her mother shortly after the death of her grandfather. Mary's mother remained in France for just over a year and took her entourage on a tour of the country. It was dramatically interrupted when a plot to murder the young queen was uncovered and Mary's mother was so worried that she took to her bed.

Matters became worse when Mary's half-brother, the Duke of Longueville, died suddenly at the age of 16. Grief-stricken, Mary's mother returned to Scotland to rule on behalf of her now only surviving child. The nine-year-old Mary kissed her mother goodbye, not knowing it would be the last time they would ever see each other. 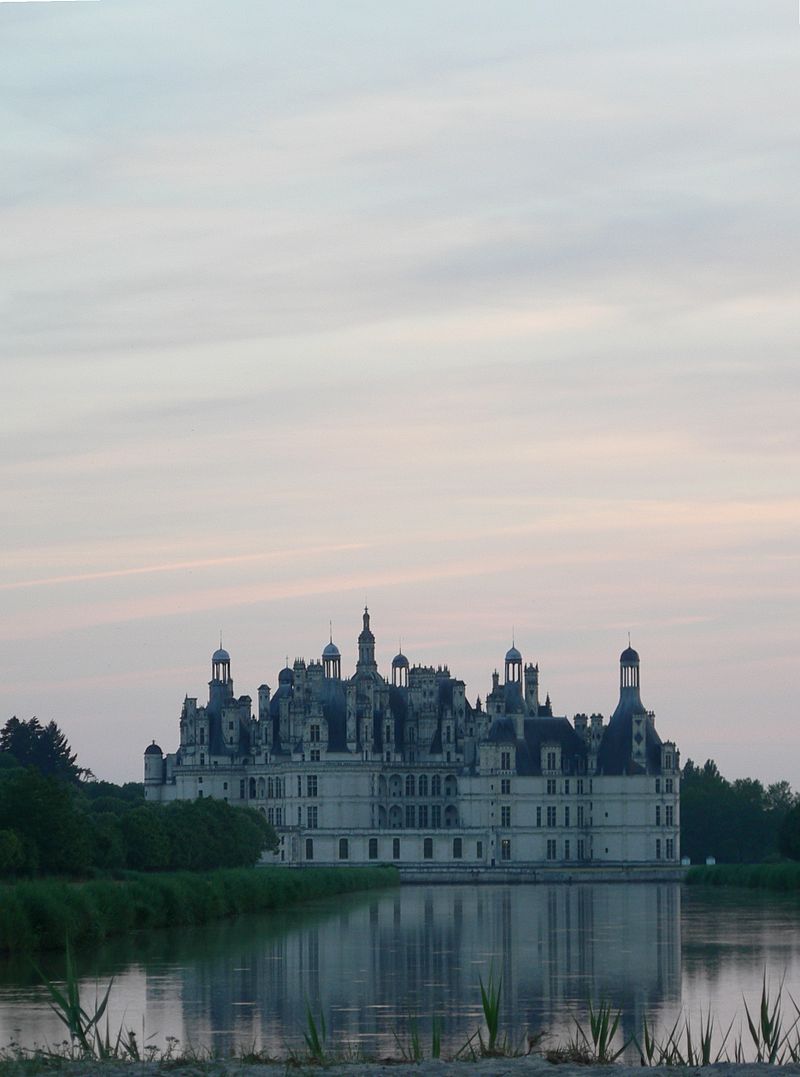 Now that her mother was gone, her uncle Charles, Cardinal of Lorraine, took over as Mary's mentor. He advised her about protocol, about the letters she should write, whom she sent them to, and what she should say. A new governess, Françoise d'Estamville, Lady Parois, was appointed, who was considered to be dull and devout. Lady Fleming had scandalously given birth to the French's King's illegitimate son and had been sent away.

For her education, Mary followed a nearly identical curriculum to that of her future husband. She would learn Latin, Greek, Italian and possibly also Spanish. She grew very close to her future sister-in-law, Elisabeth, later queen of Spain.

Mary's first letter to another ruler was to Mary Tudor, who had recently succeeded her brother as queen of England. The young queen wrote, “May it please God, there shall be a perpetual memory that there were two Queens in this Isle at the same time, as united in inviolate amity as they are in blood and near lineage.”

As Mary grew up into a young woman, she began to assert herself through lavish spending, not just for herself but also in generosity for others. She showered gifts on those who kept her entertained and rewarded the keepers of her ponies and dogs. The risings costs were equivalent to half of the annual income of the Scottish Crown. Fortunately, Mary's mother had some independent assets from her first marriage.

On 1 January 1554, Mary finally received her own household, shortly after her future husband had also received his own household. She wrote to her mother, “Madam, I'm thrilled... to tell you that today I entered into the household that you've been pleased to create for me; and this evening my uncle, the Cardinal, comes to sup with me. I hope through your careful planning, everything will be well conducted.”

Despite this, the frequent travels of the court were a huge expense that Mary could hardly meet. Mary's bed often arrived late, forcing her to borrow furniture and valuable objects were often damaged during transport. The growing Queen also urgently needed new clothes, but money was too tight.

The marriage of Mary Queen of Scots and Francis

On 24 April 1558, Mary did her dynastic duty and married the Dauphin of France in a spectacular ceremony in the Cathedral of Notre-Dame in Paris. Mary wore a shimmering white dress, despite the fact that was white the colour of mourning in France. Her dress was embroidered with diamonds and the long train was carried by two maids of honour. Her hair hung loose, and she wore a golden crown with diamonds and various other gems. 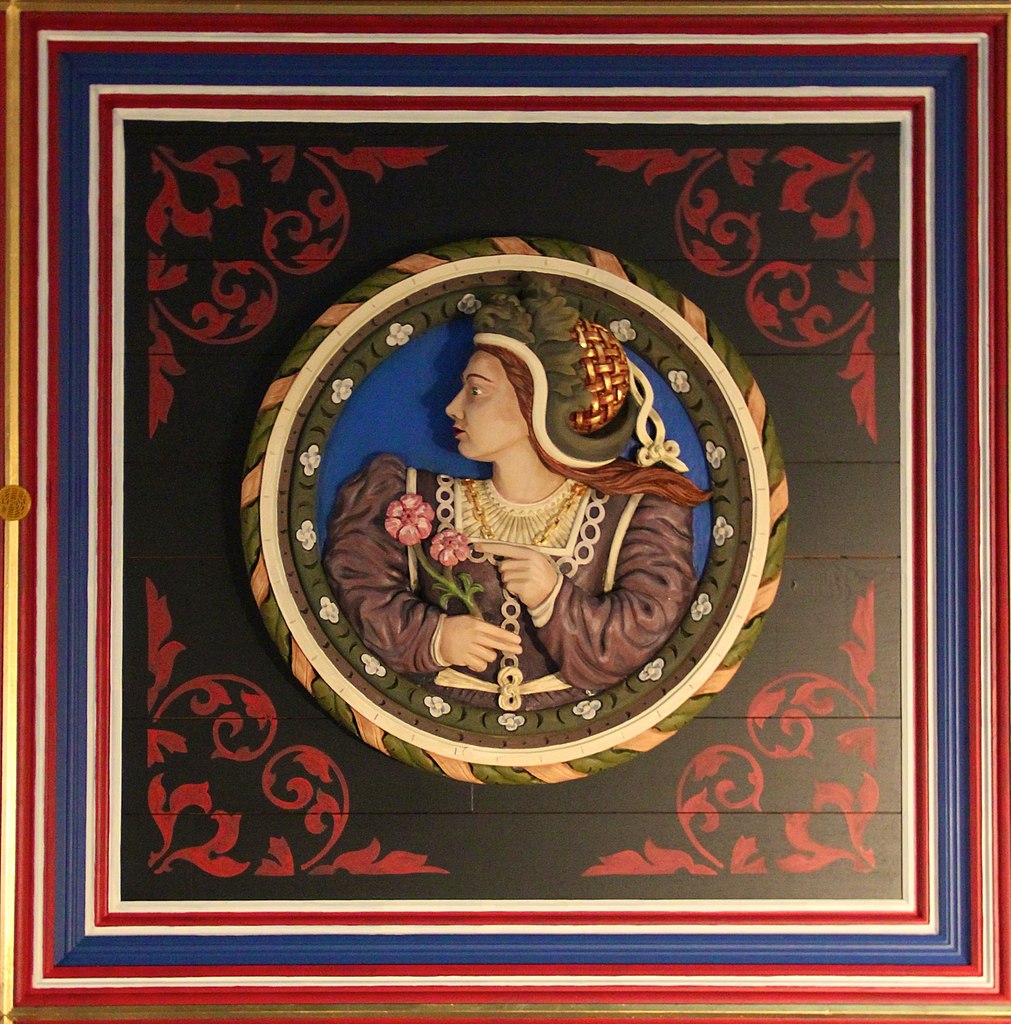 Mary wrote to her mother (shown left, on the Stirling Heads at Stirling Castle) that she was “one of the happiest women in the world.” Just a few days before the wedding, Mary had signed three secret documents that in the event of her death without an heir, the King of France and his successors were to inherit Scotland. No one had told her that these secret documents were, in fact, illegal by Scots law.

When Mary Tudor died in November 1558, the Guises were quick to proclaim Mary queen of England, Scotland and Ireland as they considered the new queen, Elizabeth I, to be illegitimate. Then the following year, Mary's father-in-law died, making her husband the new king of France and Mary now also queen of France.

Mary's first year as queen of France was marked by illness. From August 1559, she was said to be sick after practically every meal. In September, she fainted in the chapel. The following month, she was said to be suffering from tuberculosis, and in November she was in her chambers all day long. Stress was a likely cause, but we cannot be sure.

The situation in Scotland was precarious. In October Mary's mother was deposed as regent by rebel Lords and she died the following June of dropsy. Mary was devastated and wept for an entire month. That very summer rumours arose that Mary was pregnant and she began to wear loose-fitting clothes. By the end of September, the pregnancy, if it ever was a pregnancy, appeared to be false and Mary returned to wearing her regular clothes. There would be plenty of time – or so they thought.

In mid-November, Mary's husband complained of dizziness after returning from hunting. He collapsed in church the following Sunday. When fluids began to discharge from his ear, it became clear he was seriously ill, and he was immediately confined to bed. He suffered several violent seizures and became unable to move or speak. He was operated on to relieve the pressure on his brain, he was bled and purged with enemas. On 5 December 1560, he died at the age 16.

The 17-year-old Mary went into mourning in a private chamber. During those first 15 days, she hardly saw anyone and sat motionless in her white mourning clothes in a room lit only by candlelight. It probably gave her plenty of time to reflect on her options. Within a month she had made up her mind, she would return to Scotland – a country she hardly knew.