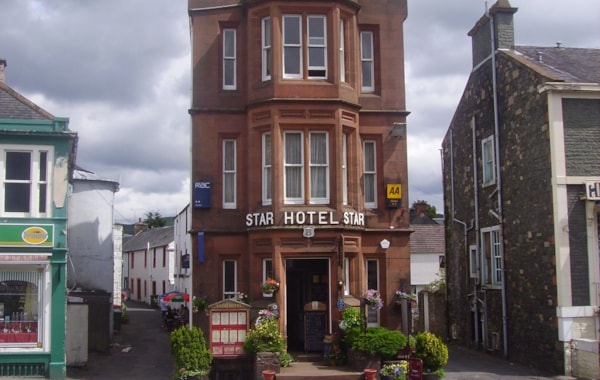 Scotland boasts some of the most stunning architecture in the world, but many Scottish buildings are also unique and unusual, as James Hendrie reveals in his guide to record-breaking locations.

Shortest street - Ebenezer Place, Wick
The world's shortest street (pictured), less than seven feet long, has only one address, which contains the front door to a restaurant at the Mackay’s Hotel. It was built in 1883 and first appeared in the town’s records four years later when it was officially declared a street.

Narrowest hotel - Star Hotel, Moffat
This hotel (pictured) has been mentioned in the Guinness Book of Records as being the narrowest detached hotel in the world. It was built in the 1700s, at a time when it had been suggested that taxes were based on street frontage size, hence the construction of a building which, although only twenty feet wide, is 162 feet deep and five storeys high!

Oldest post office - Post Office, Sanquhar
This post office has just celebrated its 300th anniversary and is the oldest working post office in the world. It was originally a staging post for mail deliveries carried out both on foot and by horse, with the first postmaster being appointed in 1739. Later, in 1862 it also became one of the first authorised savings banks in Scotland.

Longest echo - Hamilton Mausoleum, Hamilton
This final resting place of the Dukes of Hamilton was completed in 1858 and although its purpose is a tomb for the dead, it is also recognised as having amazing acoustics. As well as being one of the largest mausoleums in the world it also holds the record for having the longest reverberation or echo of any building.

Largest terracotta fountain - Doulton Fountain, Glasgow
Presented to the city by Sir Henry Doulton for the International Exhibition in 1888 and designed to celebrate Queen Victoria’s Golden Jubilee, the structure is recognised as being the largest terracotta fountain in the world. It moved to its current location at the People’s Palace in 1890 and in recent years has been refurbished to its former glory.

Oldest floral clock - Floral Clock, Edinburgh
The world’s oldest floral clock in Princess Street Gardens has been a tourist Mecca since 1903. 35,000 plants are used each year to make the face of the clock whose hands are powered by an electric motor. Since 1946 the clock has been used to celebrate a different event or anniversary each year.

Longest bridge - Golf Course Bridge, Aberfeldy
This footbridge is one of the latest additions to the world records, and at over 300 feet is the longest span reinforced plastic bridge known to man. The bridge links the two sides of Aberfeldy Golf Course and allowed it to upgrade from a nine hole to an eighteen hole course.

Tallest cinema - Cineworld Cinema, Glasgow Standing at over 200 feet high, this twelve-storey cinema, which opened in 2001, is the tallest cinema in the world. It has eighteen screens, seats over 4,000 people and is one of the busiest cinemas in the UK. Located in Renfrew Street, it is a distinctive and instantly recognisable modern landmark of the city.

First revolving tower - The Tower, Glasgow
It's fitting that this modern futurist record breaker is located at the Glasgow Science Centre; as it is the world’s first tower which can revolve completely through 360 degrees from the ground up. It stands a towering 400 feet above the park and has its own viewing platform with breathtaking views across the city.