In the latest edition of his Jacobite history series, Dr Darren S. Layne examines how Hanoverian government and British army policy was crafted to discourage and disperse large quantities of rank-and-file Jacobites in an attempt to quickly end the ‘45.

To effectively quell the martial threat of the last Jacobite rising in 1745-6, Hanoverian government officials and British military personnel worked together to wage a systematic campaign of disarmament, capture, and prosecution against a mercurial enemy. Their goal, of course, was to identify and punish the most notorious and active rebels for sedition and high treason against the Crown. But it quickly became apparent that there was no possibility enough prison space could be requisitioned to hold the sheer number of alleged Jacobites, both soldiers and civilians, who were brought in upon suspicion or in active rebellion during the nine months of the conflict. British gaol keepers were similarly beleaguered in the aftermath of the 1715 Rising, when as many as 2000 prisoners needed space and subsistence while the process of prosecution played out. In 1745-6, the Jacobite army was significantly smaller, yet well over 3500 suspected persons were immured within a prison system that had not been notably improved or expanded in the preceding thirty years. [1]

In the late summer of 1745, mere days after the rising had commenced, government officials sought a suitable way to discourage as many of the common rank-and-file troops as possible as a means of halting the spread of open disaffection. They needed a plan that would quickly declaw and disperse the bulk of the Jacobite military, likely saving the precious time and enormous expense that otherwise would have been spent on prosecuting a much larger population of plebeian combatants and their civilian logistical networks. The government's multi-pronged response was drafted from a fusion of debate and precedent concerning what actions were considered appropriately commensurate to the crimes and what regulations had already been established in the aftermath of the Fifteen. [2]

Citing widespread experiences of rebel plebeians going along with hereditary landowners by contract and regular intelligence reports of Jacobite recruiters compelling commoners into the ranks with threats, the Hanoverian government's official de-escalation policy was designed around the promise of letting them off the hook.

By the end of October, Field Marshal George Wade had published a public declaration offering indemnity to anyone who had been 'seduced by menaces and threatenings of their chiefs and superiors to take arms'. Originally distributed from Wade's camp at Newcastle, this document is an essential reflection of the government’s acknowledgement of the many Jacobites who were compelled by force. The issue was obviously pervasive enough for Wade to address it head-on, inviting those in such a position to surrender their arms before 12 November in return for 'his Majesty's clemency'. [3] 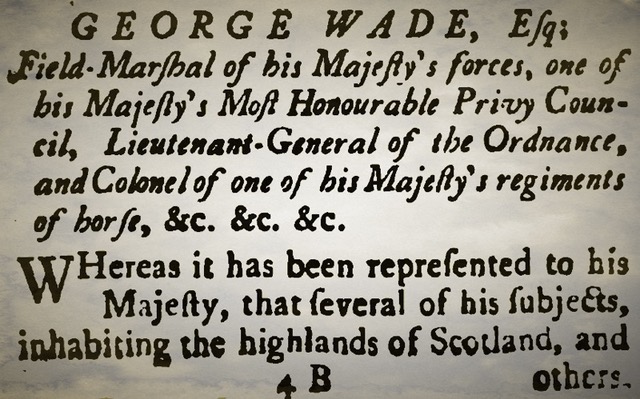 If the initiative had been thoroughly successful, the British army might not have had to again battle with large numbers of Jacobite soldiers on the field like it experienced during the debacle at Prestonpans. When the November deadline came and went, however, it proved to be not as successful as was hoped.

The rising continued as the bulk of the Jacobite army crossed the English border with an eye on taking London and installing James Francis Edward Stuart as James III & VIII. After turning back at Derby in early December and engaging once again with the British army at Falkirk on 17 January 1746, Charles Edward Stuart and the Jacobite command had a devil of a time maintaining operational cohesion of their troops. Reports of extensive desertion and pockets of compliance were coming in from officials in charge of monitoring rebel movements, which included local magistrates and Presbyterian clergy. [4]

Encouraged by intelligence that described a significant vein of reluctance in the Jacobite ranks, William Augustus, the Duke of Cumberland, released a proclamation on 24 February that again offered a vague clemency for the 'ordinary common' folks who had engaged in rebellion but were then in hiding or otherwise contrite. Issued while the British army was at Montrose and ordered to be read both morning and night at every parish church in Scotland, Cumberland's demand struck a more critical tone than Wade's had, plainly stating that anyone who had been in arms up until that point and who saw it fit to turn them in to qualified officials would be eligible for the King's mercy. Everyone else would be considered to be traitors and would be ‘pursued with the utmost Severity’. [5]

By this later state in the campaign, many more plebeian Jacobites were ready to disengage from the 'cause' and head home. The frequency of submissions rose sharply, and some attempts to do so were even turned away by the authorities. Patrick Stewart from Innervaik swore that he tried to hand in his firelock to the minister at Blair Atholl but was refused on account of a rumour that he was an officer. Likewise, by late spring the minister at Alvie reported that the suspected Jacobite Lewis Macpherson had not yet delivered up his arms as ‘there was no Invitation but to the Commons he being ranked with their Gentlemen’. This and other similar claims demonstrate that the offer of submission for mercy was only intended for the common rebels, while punitive attention was framed most squarely on Jacobites of rank and means, as well as those with notoriety and influence. [6]

These guidelines of policy would blur in the months after Culloden, when elements of the British army waged a brutal campaign of retribution against recalcitrant communities in Scotland, both within and outwith the Highlands, often without regard of status or provable degree of guilt.

While it is difficult to know exactly how many individuals complied and disarmed themselves on account of these two offers of amnesty, based upon the local and regional lists drawn up by government officials that specifically record such cases, we can empirically estimate that many hundreds did so. [7] Yet British army clerks estimated that by the end of April 1746 as many as 4500 persons had voluntarily surrendered their arms to justices of the peace or parish ministers, in accordance with the terms of Cumberland's offer on 24 February. [8]

If accurate, this remarkable frequency of capitulation in just over two months represents roughly a third of total projected Jacobite army strength through the entire campaign. Not only does this appear to bear out the significant desertion and 'melting off' repeatedly complained of by Jacobite command and celebrated by Hanoverian intelligence agents in the months after Falkirk, it is also a powerful demonstration of the government’s successes in attempting to disperse martial Jacobitism through promises and policy rather than a lengthy process of litigation and sentencing. [9]

What happened to these commoners after surrendering their arms is harder to trace. The mercy promised by British authorities ostensibly extended until the rising had been quelled, when government officials could review the many lists of those who had submitted and decide if and how to seek further prosecution. Most were definitively not imprisoned, and according to legal records, only the most notorious were actively sought out for capture and trial, especially if two or more witnesses had spoken out against them. [10]

It follows that a wealth of biographical information still lies in the archives about thousands of Jacobite participants who were not shuttled through the British judicial system. As a result, very few of them appear in published lists of Jacobite prisoners and their absence tells its own story. Had these soldiers ignored the amnesties offered to them by the terms of Wade's and Cumberland's declarations, and had their arms not been secured at the nearest British army garrisons to prevent their continued use in the rising, the martial threat of the Jacobite army might have continued on even longer. [11]

3. This date is referenced by notes within numerous lists of prisoners and their examinations, signifying that many captured rebels knew about Wade’s offer of indemnity and attempted to use it as a validation of their submission. For examples, see the examinations of Michael Steel in PKA B59 30/72/2; Robert Mill in NLS MS 3730 ff. 4-5; John McWarish in TNA SP 54/32/41c; Robert Randal in SP 36/88/51; and Andrew Stewart in RA CP/Main Box 10/148.

7. For examples from published and archival lists, see Layne, 'Spines of the Thistle, pp. 186-7.

9 For more on Jacobite desertions as reported by both sides, see Layne, 'Spines of the Thistle', pp. 162-6.