The history of the architecture of Scottish cities We explore the architecture of Edinburgh, Glasgow, Aberdeen and Inverness to see how they differ, and how political and historic events have influenced the design and construction of buildings in each city.

Home design specialists DM Design explore the architecture of Edinburgh, Glasgow, Aberdeen and Inverness to see how they differ, and how political and historic events have influenced the design and construction of buildings in each city.

The boom in Edinburgh’s architecture began with the Act of Union in 1707. Before the Union, the city was a single street with small lanes or ‘wynds’ running through it.

Many of the city’s homes were tenement buildings; tall, cramped, unsafe and piled high in order to cram many people into a very small space. Rich and poor people often lived in close proximity in the tenement buildings and socialised in the same inns and alehouses.

The introduction of the New Town

Edinburgh’s Town Council proposed a new town in 1752, intended to alter the cityscape into symmetrical streets lined with terraced houses. Streets were named to celebrate the Act of Union, including George Street, named after King George III. The designs also included large, incorporated gardens, shopping centres and green spaces. It was expected that the wealthy would live in the New Town.

The New Town was built separate to the Old Town, separated by Nor Loch, now known as Princess Street Gardens. As the New Town flourished, the Old Town also began to benefit. Roadways and buildings at the Court and Exchange were also constructed during this period.

Edinburgh now has nearly 5,000 listed buildings and is a unique mix of the medieval and the modern existing side-by-side.

Like Edinburgh, Glasgow city’s architecture was largely influenced by the Act of Union, and the formation of the United Kingdom.

The Union generated more trade in Glasgow than ever before, and Glasgow had to diversify its economy to be more focussed on ship building and other industries. Glasgow’s economy continued to grow solidly until World War I. The city’s success was contrasted with its overcrowded city, poor conditions, slum areas and tenement houses.

During the 19th century, the work of award-winning architect Charles Rennie Mackintosh transformed the landscape of Glasgow – and the entire field of architecture and design worldwide.

The Glasgow School of Art (pictured above) was a buzzing hub of art, design and architecture. In the 1890s, together with his contemporaries Margaret MacDonald, Frances MacDonald and Herbert MacNair, Mackintosh became part of the Glasgow Four, responsible for a big contribution to ‘Glasgow Style’.

The architecture of post-war Glasgow

After the wars, the city of Glasgow was a hub of regeneration. The slums and tenements were cleared and replaced by modern-era estates and high-rise housing. New towns were also created to house some of the city’s population.

Aberdeen is known as The Granite City (or the Silver City) due to many of the city’s most well-known buildings and homes being made from granite from quarries around the area. Some examples of granite-made buildings in Aberdeen are:

Provost Skene’s House is one of the city’s few examples of the pre-industrial use of granite. Granite is incorporated into rubble walling, and sandstone is used for more decorative features.

The front of the music hall was designed by Aberdonian architects Archibald Simpson and James Matthews. By 1961, this area was targeted for demolition, but it was instead refurbished and restored by the District Council in the 1980s.

The much more modern Art Deco style also reached Aberdeen, with Rosemount Square’s circular housing block. It is a stunning mixture of modernity and tradition, with a sculpture of T.B. Huxley Jones being used to decorate the structure. 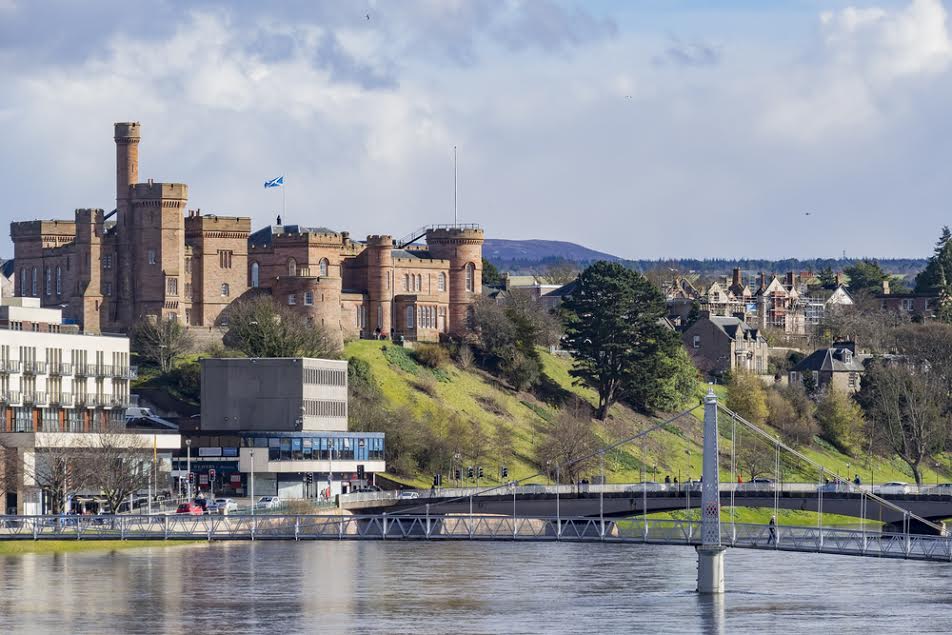 Established as long ago as 585 AD, Inverness is one of Scotland’s most historic towns – where people in the Highlands met to trade.

The longest-surviving house in Inverness is Abertarff House, which was built in 1593. The historic house was created as the town house for the Frasers of Lovat. It was developed with corbie steps (known as crow-stepped gables)  to stand out from other buildings on the street. Corbie steps are often associated with Danish medieval architecture.

Around 1726, the Balnain House was built, with early-Georgian style characterised by strong symmetry and a powerful, imposing appearance. The building is now an office for The National Trust for Scotland.

The 1800s was host to a variety of examples of architectural change in Inverness.

The Victorian Gothic-style Town House was also built in 1882, with characteristics of prominent finials and gables.