The roots of Jacobitism - guest blog from Dr John Callow Dr John Callow, author of a new book on the exile of King James II, explores how the king created the Jacobite movement and inspired the loyalty of thousands of followers, despite being exiled far from his homeland.

Dr John Callow, author of a book on the exile of King James II (James VII of Scotland) explores how the king created the Jacobite movement and inspired the loyalty of thousands of followers, despite being exiled far from his homeland. Read more about the Stewart monarchs in our History Scotland digital special.

Jacobitism was always a matter of the heart, as well as the head. Of romance, as well as of hard political calculation. It conjures up a world of Alan Breck Stewart drilling ragged Highland insurgents before Culloden Moor; of a Bonnie Prince lost in the heather; secret toasts to kings “across the water”; and of exiles longing to return home.

There has, perhaps, never been a ‘better’ – or more influential - lost cause. It has gripped the imagination of successive generations of novelists, from Walter Scott, Harrison Ainsworth and Robert Louis Stevenson to Compton Mackenzie, Nigel Tranter and Joan Aiken.

If it has pitched Rob Roy against lines of Redcoats at Glen Shiel and forged the character of David Balfour, then it has also seen comic heroines staring out towards the horizon in expectation of the Young Pretender’s imminent return to the Scotland of the late 1940s, and caused the wolves of Willoughby Chase to prowl a land where modernity has been comfortingly halted, and where ‘King James III’ still sits securely upon his throne. 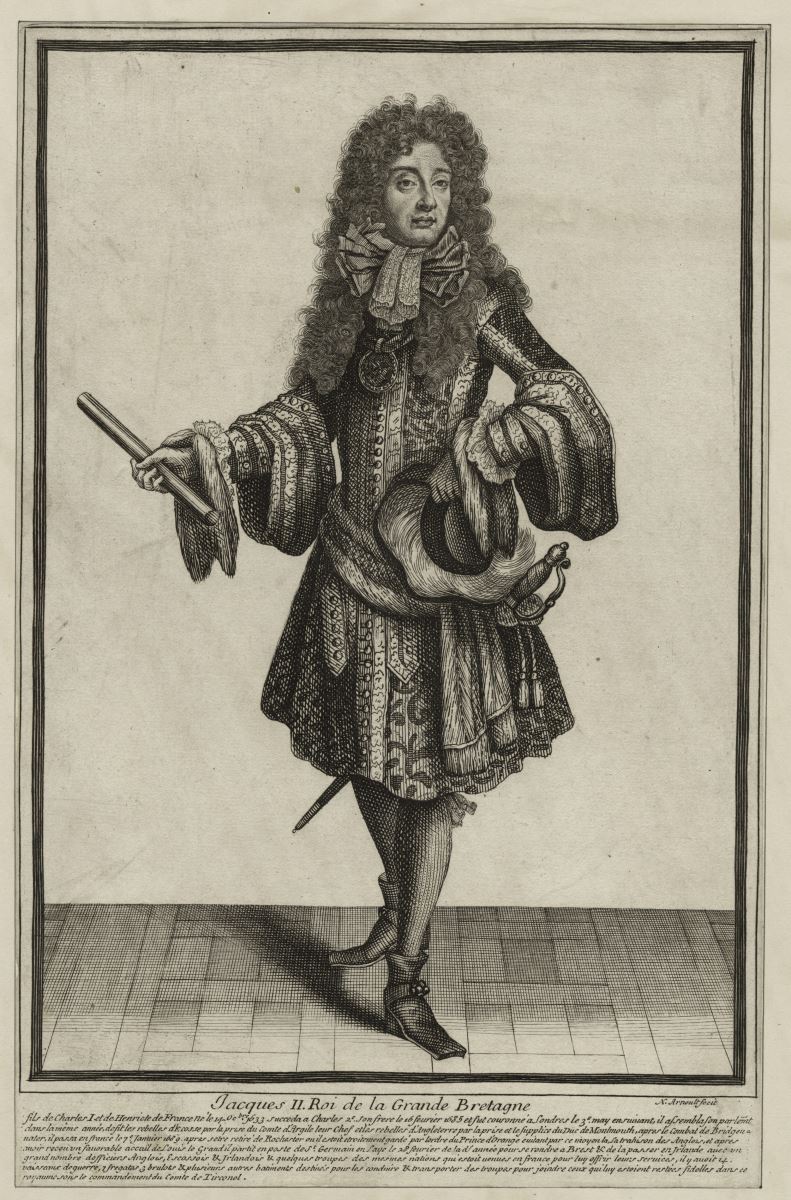 The roots of Jacobitism

Yet, the roots of Jacobitism lay in the policies and personality of the original ‘Jacobus’ – the fallen King James II – himself. Far from home and stripped of power, he stood upon his dignity and considered exchanging an earthly crown for a heavenly one and re-invented himself as a ‘man of sorrows’, a religious mystic and ascetic.

In an age of trimmers, who prized personal advancement above all else and who would turn deception and greed into refined, almost gentlemanly arts, there seemed something noble in James’s headlong – and sometimes brutally stark - adherence to what he saw as principle and to a religious conviction that, within the context of the times, could not possibly lead him to any other destination but his own, particular, Golgotha.

This romance, therefore, has its roots in the hard reality of massacre, blood feud and want. A Highland army triumphed at Killiecrankie but broke itself on the walls of Dunkeld, where it fell before the disciplined volleys of other Scots: the Lowlanders and religious radicals of the Cameronian regiment. The remnants, 150 officers - the veterans of Claverhouse’s campaigns - regrouped at the exiled Court at St. Germain to offer their swords to James II.

Yet, the king had nothing to offer them.

Without their men behind them there was little hope of finding them suitable employment and, to avoid becoming yet another drain upon James’s already overstretched resources, they took service as private soldiers in a specially raised Scottish company in the French army. Receiving orders that the new regiments were to leave for the war in Spain, James II summoned them to his palace, on the eve of their departure, for one final review.

As drums rolled, James appeared before them theatrically wrapped in the folds of a long black coat, to bestow upon them the parting blessing “of a King and a father”, commiserating with them for their misfortunes and loss of status. “I cannot express to you”, James confided, “how terrible it is for me to see so many brave and worthy gentlemen, reduced to the rank of simple soldiers”. He walked through their ranks, speaking a few brief words of encouragement to each man in turn and promising that: “If it pleases God for me to be re-established on the throne, I will compensate you for your suffering and repay you for your devotions to me”. 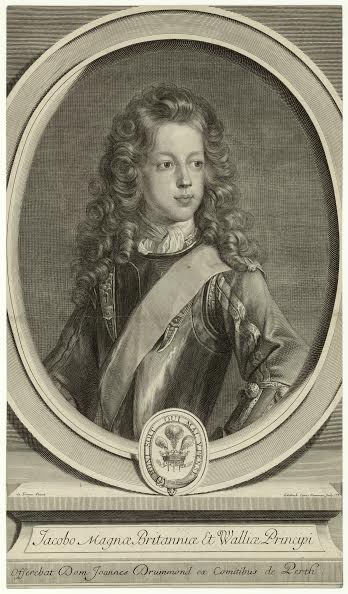 As they marched out of the gates of the Chateau of St. Germain and down the tree-lined avenue that would set them back on the road to Paris, and eventually on to the frontier fortresses, King James withdrew into his private chamber for the rest of the day, shedding hot tears at the thought of their sacrifice and in recognition of his own reduced circumstances which had made him powerless to help them in the time of their greatest need.

Three years later, in 1695, a touching sequel to these events would be played out, as a handful of bedraggled survivors from this group returned to St. Germain from the battlefields of Catalonia. Seeing the little Prince of Wales (the future ‘James III & VIII’ or ‘Old Pretender’ - pictured right) taking his morning walk through the castle grounds, they thrust their arms through the palace railings, calling out to the child and wishing him well. Throwing the men the purse containing his pocket money – of 12 pistoles, slightly less than £10 sterling – the seven year old boy commanded them to drink a health to his father, King James, as the grown men pressed forward to kiss his slender hand.

Such examples of devotion, emphasising the selflessness of both the exiled Stuarts and those who sought to serve them, were to become the staples of Jacobite hagiography, stirring the emotions and inspiring the love and fidelity of those who had given up everything they had to follow their cause.

However, such deeply sentimental motifs, bordering at times upon the maudlin, played less well outside the exile community. They exuded a particular form of tragedy and hopelessness which only struck a truly popular chord in England and Scotland with the Romantic revival of the nineteenth century, when the Cardinal of York (the last of the Stuart line) slumbered safely in a tomb paid for by a Hanoverian king, the Jacobite cause was spent as a political force, and all that was expected of its new and, largely, middle class and urban adherents was a sense of melodrama and creative vision, rather than a commitment to a life of covert and treasonable action which threatened poverty and the tug of the hangman’s noose at every turn.

In this sense, if James II’s fashioning of the Jacobite movement proved to be something of a poisoned chalice for his heirs, then it also provided an immensely rich and emotive well-spring for the imagination of later artists and writers who sought to celebrate all that was best in the heroism and pathos of a vanishing clan system in the Highlands. In the case of Jacobitism, history is certainly not written by the winners but by those who have the vision and – like the exiled King James – know the value of the art. 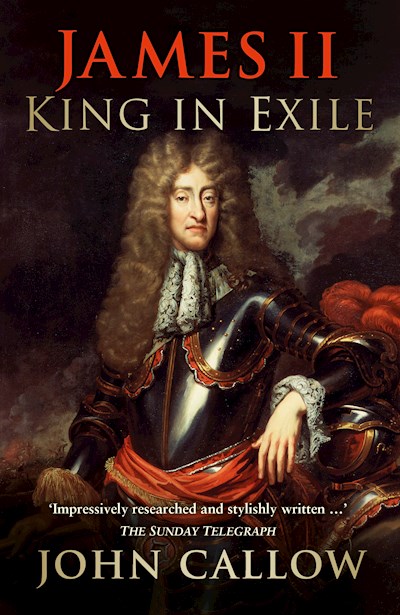 Dr John Callow is the author of James II: King in Exile, published by History Press at £12.99. The book explores what became of Britain’s last Catholic king during his time in exile, including the twelve years he spent attempting to recover his crown through war, diplomacy, assassination and subterfuge.

Find out more about Dr Callow’s work on his website.