Glasgow has so much to offer art lovers. Walking from one side of the city to another is akin to being in a gallery, with the buildings and the periods in time they represent spanning over the last millennium. Until around ten years ago the city centre was dominated by Victorian buildings erected after an influx of wealth was brought to the city during the Industrial Revolution.

In more recent years, modern architectural design along the Clydeside and in the Merchant City has reinvigorated and revitalised the rhythm of the Glasgow's cityscape. Sharp edges now contrast against the Classical styles of mercantile banks, whilst the sandstone facades so synonymous with the architectural identity of Glasgow now stand alongside new materials of glass and exposed steel.

The city has seen incredible amounts of investment into restoring and repairing its great art collections, with Kelvingrove Art Gallery reopening in 2006 and Thomas Burrell's collection – which he donated to the city of Glasgow in his will – undergoing a three-year restoration today.

I have curated my top three sights to see for art lovers in the city, but you can see all of my picks in my book, An Art Lover's Guide to Glasgow, which is available in digital copy from all Amazon stores for just £2.99. 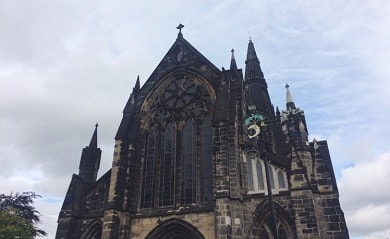 As one of the oldest buildings in Glasgow, the city's cathedral is a must see. Just a stone's throw from the city centre, it is a tribute to the dichotomy of old and new throughout the city. Ground broke on the cathedral in the early 12th century and in 1136 it was dedicated to the patron saint of Glasgow, St Mungo. It is the only building of its kind in mainland Scotland to survive the Reformation and is the burial site of many accomplished Glaswegians including St Mungo himself.

It is a striking example of Gothic architecture and its consequential soaring ceilings, stone interiors and rose wheel facade sets it apart from other churches across the city. The interiors of the cathedral are flooded with light, as was so common throughout the Gothic period. There are also elements of Classicism in the form of the Corinthian columns that line the nave of the cathedral and the vaulted ceilings in the lower floor.

The cathedral is minutes away from many other incredible sights such as the Glasgow Necropolis, which offers beautiful views of the cathedral from an elevation. The Glasgow Royal Infirmary, a hospital built in 1794 stands adjacent to the cathedral and the Provand's Lordship, Glasgow's oldest building just around the corner. 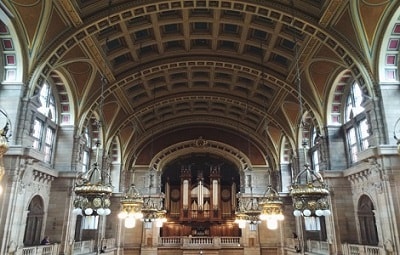 One of the greatest things about Glasgow is that you can visit all of its public museums and galleries absolutely free of charge. As well as national galleries, independent galleries are thriving in the city's centre and West End.

Kelvingrove Art Gallery & Museum was established in 1901 and is built on the grounds of Kelvingrove Park, overlooking the River Kelvin. It houses one of Scotland's greatest collections of art, boasting paintings by Dali, Monet and Cezanne.

The paintings house the upper floor of the gallery and are organised by genre and subject matter rather than time frame. On the lower level there are a plethora of exhibitions, from artefacts from Ancient Egypt to the works Charles Rennie Mackintosh.

The gallery reopened in 2006 after a three-year restoration and has reaffirmed itself as one of the most prestigious not only at a national level, but globally.

Templeton on the Green 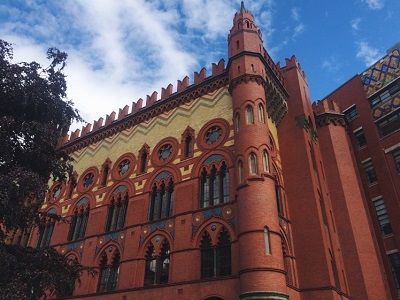 The original Templeton building was commissioned by James Templeton and Son to house a carpet factory. William Leiper, the Scottish architect and watercolourist, designed the factory based on the Doge Palace in Venice.

Construction on the building began in 1888 and was completed four years later. The red and blonde brick Western facade is in keeping with the widespread use of sandstone across Glasgow, while the influence of Byzantine and Moorish architecture undoubtedly set it apart from any other building in the city.

Templeton underwent a huge restoration and redevelopment in 2005 and now houses a microbrewery, restaurant, retail units and luxury apartments.

It stands on the cusp of Glasgow Green, one of the city's largest parks and is just across from the People's Palace and Winter Gardens, a botanical garden and museum focused on the history of Glasgow (which also offers free entry). 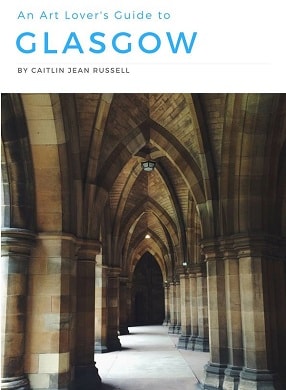 By Caitlin Jean Russell, author of An Art Lover's Guide to Glasgow, available on Amazon.

Caitlin is studying for a Master's degree in Art History at the University of St Andrews and has been a travel blogger for three years over at her website www.caitlinjeanrussell.com

Find her on social media