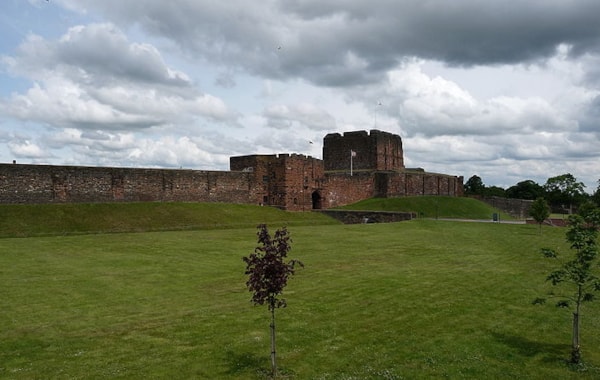 Mary spent just eight weeks at Carlisle Castle, from 18 May to 13 July 1568, with Sir Francis Knollys as her custodian. Although Mary was permitted to take walks outside the castle walls with her ladies, and walk the stretch of castle walls that later became known as ‘the lady’s walk’, the other limitations placed upon her movements (such as the fact that she couldn’t travel elsewhere or receive guests without the permission of Elizabeth I) were a foreshadowing of the long years of imprisonment to come.

Mary was kept in Queen Mary’s Tower, which was largely demolished in 1834 due to its unsafe condition and is now a ruin. As the original Norman entrance this was one of the oldest parts of the castle. Mary arrived after a four-hour crossing of the Solway Firth with her retinue, and she expected that her stay at the castle would be a short one – believing she was simply awaiting the help of her cousin Elizabeth I who would help her to regain the throne. Sadly for Mary, this ill-advised plan was to lead to her being imprisoned for the rest of her life.

Although Mary wrote to a supporter soon after her arrival that she had been ‘right well received and honourably accompanied and treated’ whether or not she realised it at this point, she was a prisoner, and was being kept under armed guard. Sir Francis Knollys was sent north from London by Elizabeth I to be Mary’s keeper and although he described her as ‘pleasant’ he was under pressure not to allow his royal prisoner to escape.

Mary’s retinue included her faithful friend Mary Seton, who was able to help the queen to maintain her appearance. The cost of keeping the queen and her court at Carlisle was £56 a week, money which was payable by Elizabeth I. Mary’s accommodation was on the south-east corner of the inner ward in a building known as Warden’s Tower (and later, as Queen Mary’s Tower). Despite the conditions, Mary lived in much more sumptuous surroundings than the majority of Elizabeth’s subjects, and a 19th-century text confirmed that the tower was in a better state of repair than the rest of the castle, with richer architecture.

The Mirror newspaper of 4 February 1886, kept by Royal Collection Trust, described the castle as ‘in good repair… a strong ancient keep remains, with a well of great depth… in one of the gates of the castle the old portcullis is still standing.’

John Bonner, site manager at Carlisle Castle, talked to History Scotland about what Mary would recognize of today’s castle: ‘although she would still recognise the castle – certainly from the outside  –as this has been a working castle from its foundation in 1092 until the twentieth century – it typifies several centuries of military engineering – from the early 12th century up to the 20th – our youngest buildings date from the 1930’s – the oldest are early 12th century.

Although Queen Mary’s Tower is now largely a ruin, it’s possible to see an octagonal turret that once gave access to the tower and to wander the grounds where Mary took her leisure. In comparison to many of the prisons that awaited her, such as Tutbury Castle, she would look back on her stay at Carlisle and realise that perhaps conditions and her surroundings had been not so bad in comparison.