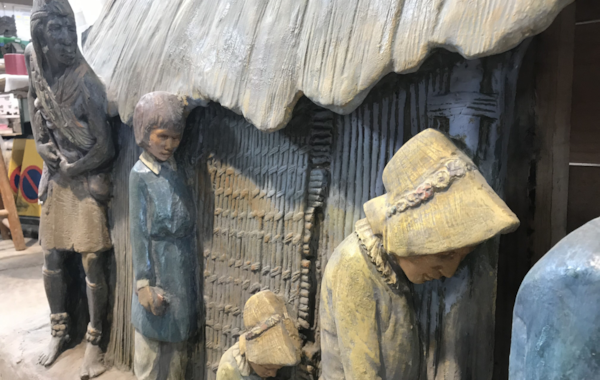 The tableaux, created by prominent 20th-century British sculptor Charles d'Orville Pilkington Jackson in the 1920s, were transported from the David Livingstone Birthplace in Blantyre to Edinburgh-based sculpture specialists Graciela Ainsworth Sculpture Conservation for the conservation project.

The specialist conservation work forms part of a £6.1 million project, funded by the Heritage Lottery Fund, Scottish Government and Historic Environment Scotland, to transform Livingstone's Blantyre birthplace into a 'hub of learning and cross-cultural importance'.

The site is currently closed for the renovation of the centre which includes the renewal of the historic buildings and a newly interpreted exhibition which will showcase artefacts from the Trust's collection of over 3,000 objects. The tableaux will return to Blantyre to be exhibited once the project is completed and the site re-opens to the public in 2020.

There are eight tableaux in total, which were commissioned in 1927 after the Executive Committee of the Scottish National Memorial to David Livingstone was established to honour his memory as well as secure the site of his birth in Blantyre. Each tableaux depicts scenes from his life.

Pilkington Jackson, who was prolific in the 1920s working on war memorials across the U.K, including the Scottish National War Memorial in Edinburgh Castle, collaborated with architect Sir Frank Mears, who was instrumental in the project to save the building of Livingstone's birth and artistic planning of the tableaux.

Do you enjoy exploring Scotlan? Check out our travel section

After an international appeal was launched to preserve Livingstone's first home, a number of societies that had some form of connection to Livingstone sponsored the various tableaux and were depicted in the creations. For example, the tableau named ‘Truth' was sponsored by the National Bible Society of Scotland and ‘Mercy' by the Anti-Slavery Society.

The team from Graciela Ainsworth have been involved in the conservation work of the Pilkington Jackson tableaux for some time, performing an initial survey of the work required to the actual painstaking restorative work, from restoring flaking paint to toning unpainted areas.

Coincidentally, Pilkington Jackson's granddaughter, Kirsty Jackson, was able to direct conservators from The David Livingston Trust to more information about the tableaux in the National Library of Scotland after she happened to be visiting Graciela Ainsworth's studios while on an art trip.

Work that reflects an era

Grant McKenzie, Centre Manager at the David Livingstone Birthplace, said: "It has been wonderful seeing these precious tableaux created by renowned sculptor Pilkington Jackson be rejuvenated by the superb Graciela Ainsworth Sculpture Conservation ahead of our re-opening of David Livingstone's birthplace in 2020. Although celebrated for their artistic merit, the tableaux depict David as a lone explorer, working mostly without the help of local Africans. This contradicts extensive written evidence left by the man himself, so the depictions are not a true reflection of the essential roles played by local Africans during his travels. The works very much depicts the era. We are excited to share the beautifully restored tableaux with the public next year."

Graciela Ainsworth, Founder of Graciela Ainsworth Sculpture Conservation, added: "They are great pieces of sculpture, and working closely on them, has enabled us to learn so much more about Pilkington Jacksons hand modelling, and of these fine pieces, and importantly to very cleverly integrate the invaluable structure within each very thin tableaux is masterful.  Each tableaux is as much about the physical sculpture as the space that they embody. Therefore these pieces are incredibly fragile yet have an inner strength as objects, and for us to dismantle them from their building, transport them and work on them in our workshop is a privilege and also a great learning process, aided by Pilkington Jackson's granddaughter, and the very important support, understanding, and passion of Lesley Scott Project Conservator."