A programme of art and events on Scotland’s walking, wheeling and cycling routes has been launched as part of 2021’s Black History Month celebrations across the country.

Announced by walking and cycling charity Sustrans, the artworks and performances will use spaces along the country’s National Cycle Network throughout October to celebrate notable Black people from Scotland's history, and key events that have made Scotland the country it is today.

Black History Month is a month-long celebration of the history of Black people in the UK, held in October in the UK since 1987.

The Coalition for Racial Equality and Rights (CRER) has co-ordinated a uniquely Scottish Black History Month during October since 2001, and the artworks are part of the wider programme of events organised by community, voluntary and public sector organisations throughout the month.

Together with an external steering group of artists and engineers, the charity commissioned the 8 artists to deliver unique artworks or performances on traffic-free National Cycle Network routes in Scotland.

The artists individually selected a section of the National Cycle Network relevant to the story they want to tell through their work, with the successful commissions including sculptures, murals, digital art, poetry, music and theatre.

Grace Browne (pictured below), artist and creator of a traditional African women’s mural triptych situated at Glasgow Green, National Cycle Network Route 75, said: “It’s been phenomenal to have this opportunity to create artwork that celebrates African women’s art and architecture.

“It’s also powerful that they will be in a public space in Glasgow and will be accessible to so many people.” 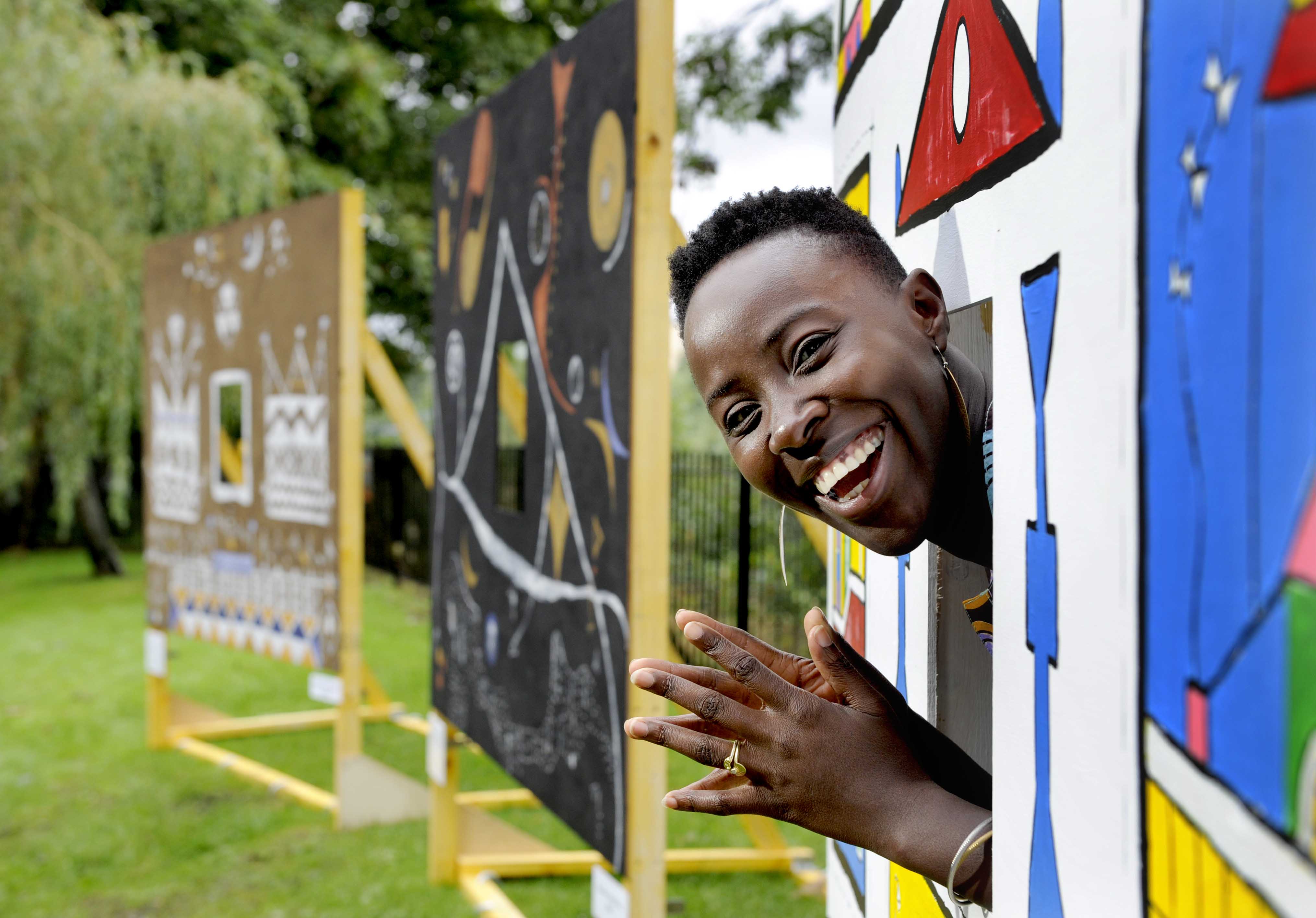 The artworks will aim to highlight people whose sacrifices, contributions and achievements against a backdrop of racism, inequality and injustice are often forgotten about. They will also highlight and address Scotland’s role in the transatlantic slave trade.

About the artworks and events

Ojo Taiye has written powerful poems that explore historic and contemporary race relations in Scotland, as well as recognizing the contributions made by African and Caribbean people to this city, whilst exploring Scotland’s role in the transatlantic slave trade. You can find the poems on special plaques along the Glasgow – Clyde walkway (location), National Cycle Network Route 75, available to read from 1st-31st October.

Grace Browne has created a mural Triptych of traditional African women’s mural painting with inspiration from three mural styles. The murals are designed to weather over the course of the month, so you are encouraged to visit it multiple times to see how it changes. The project celebrates the 'beauty, creativity and ingenuity' of African women's art and contributions to the built environment. Grace’s mural can be found on Glasgow Green (location), National Cycle Network Route 75, from 1st-31st October

Moira Salt has found inspiration from Jackie Kay’s Lamplighter. She will create a sculptural performance work that uses materials found along the coasts of Scotland that gestures to the treatment of Slaves, and the experience of Black and Brown bodies within a diaspora. Moira’s work can be found at Bowling Harbour (location) on National Cycle Network Route 7 throughout October.

Senanu Tordzro looks to highlight and celebrate her culture and home in Ghana. She has created a trail using traditional Ghanaian Adrinka Symbols, with links to her animations along the waterfront in Dundee (location) on National Cycle Network Route 77.

Harvey Dimond examines the relationship between the climate crisis, anti-Blackness and homo/trans-phobia. Harvey’s project will feature 2 sandstone monoliths bearing the names of slaves who were used to build the wealth of Robert Gordon and the Montgreenan House estate in North Ayrshire. Their piece can be found 1st-31st October in Kilwinning (location) along National Cycle Network Route 7.

Mark Tremaine Agbi ‘Okata’ will create a mural in the Rodney Street Tunnel (location) on National Cycle Network Route 75 which will be available to view throughout October.

Becky Sikasa will be performing a short series of musical-visual events at differing locations along the Water of Leith (location) on National Cycle Network Route 75 on 8th (18:30), 10th (14:00) and 13th (18:30) October. Centred around a piece featuring text from Scottish poet Jackie Kay, Sikasa explores questions of identity and self, evidenced in her musical focus on vocals and soul, This run of performances will include visual accompaniment from Olivia Middleton.