Bright Star: the art and life of James VI/I 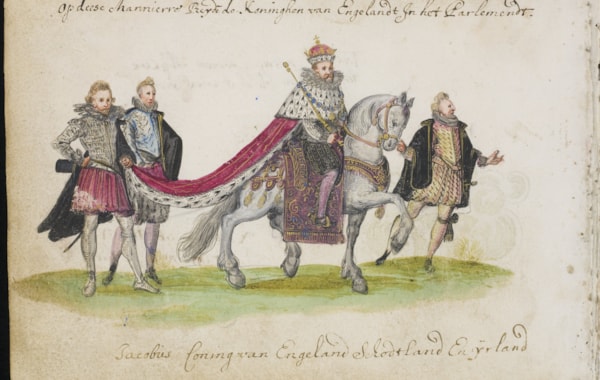 A major exhibition on the life of King James VI, the first for more than 40 years, will be held at National Galleries in Edinburgh next year.

Bright Star: The Art and Life of King James VI & I will uncover a wealth of artistic and cultural riches of the Jacobean period, featuring a variety of artworks and objects such as paintings, dress and textiles, miniatures, drawings, books, manuscripts and jewellery.

These include highlights from the Cheapside Hoard, an accumulation of jewellery from the late 16th and early 17th centuries, discovered in London in 1912, which have not been on display in Scotland for over 40 years. The exhibition will also bring together outstanding works by artists such as Sir Peter Paul Rubens (1577-1640), Nicholas Hilliard (1547-1619) and Inigo Jones (1573-1652), and will include significant loans from public and private collections, including the Royal Collection Trust, the Victoria & Albert Museum, Tate, the National Portrait Gallery, London and National Museums Scotland.

James was the only son of Mary Queen of Scots (1542-1587), one of the most notorious and romantic figures in Scottish history. He was crowned when only a year old, during a period of great unrest and uncertainty which followed the death of his parents.

The exhibition will begin by focussing on James’ turbulent childhood and youth, and will move through the defining moments of his life, including his coming of age; his marriage to Anna of Denmark (1574-1619), the birth (and deaths) of his children, the Union of the Crowns, when he proclaimed himself ‘King of Great Britain’; and the move of his family and court to London. The key moments presented within the exhibition provide a rich historical context for contemporary debate.

A prolific scholar and author, James was highly cultured and known for writing about many subjects, including government, witchcraft and tobacco. His court, both in Scotland and London, became a great centre for creative and artistic innovation and renowned as a centre for literature and entertainment.

Kate Anderson, Senior Curator, European & Scottish Art and Portraiture said: “The objects in this exhibition not only shed light on the fascinating life of James VI & I, his family and members of his court, but are unique and exquisite works of art made by highly skilled artists and craftspeople. Highlights include a miniature portrait of Queen Anna of Denmark set in a diamond and enamel case made by the Edinburgh goldsmith George Heriot, and the brilliantly coloured drawings of costume for court masques designed by Inigo Jones.

When James arrived in London in May 1603 he was met by the lawyer and orator Richard Martin who proclaimed that James was the ‘Bright Star of the North’, alluding to both the King’s homeland of Scotland and the optimism associated with his future reign.”

Bright Star: The Art and Life of King James VI & I

For the latest history, archaeology and heritage news, sign up to the free History Scotland newsletter.