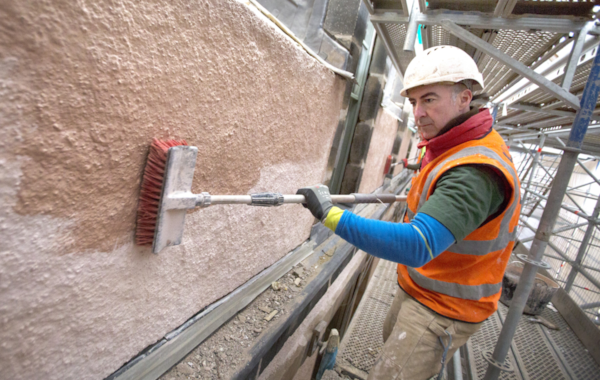 The newly restored exterior of the Abbey Strand buildings in the Canongate at the end of the Royal Mile in Edinburgh will soon be unveiled to reveal a new pale-pink facade.

The newly restored exterior of the Abbey Strand buildings in the Canongate at the end of the Royal Mile in Edinburgh will soon be unveiled to reveal a new pale-pink facade.

The restoration work was undertaken as part of Future Programme, a major programme of investment by The Royal Collection Trust to improve the visitor experience at the Palace of Holyroodhouse. For the past year, the Abbey Strand buildings had been covered with a nine-metre-high scaffold wrap, behind which the specialist restoration work was carried out.

The ground and first floors will house a new Learning Centre, opening in late 2019. The buildings’ new pink lime-mortar coating is a rough-cast finish that has been used in Scottish construction for hundreds of years. The pink colour was produced using mineral pigment from the red sandstones of Dumfries, which yield a red-ochre tone.

Over their 500-year history, the Abbey Strand buildings have served many purposes. In 1541 they were used as a weapon store for James V of Scotland during his campaign against the English and in the 18th century they were reputedly home to Lucky Spence, the brothel keeper immortalised by the Edinburgh poet Allan Ramsay in his ballad Lucky Spence's Last Advice.

Tim Knox, Director of the Royal Collection, said: ‘The unveiling of the restored exterior of the Abbey Strand buildings is a significant stage in our Future Programme project. The next milestone will be the opening of the Learning Centre as a place for schoolchildren, adults and the local community to engage with the Royal Collection and the 900-year history of the Palace of Holyroodhouse.’

QUICK LINK: A history of the Palace of Holyroodhouse