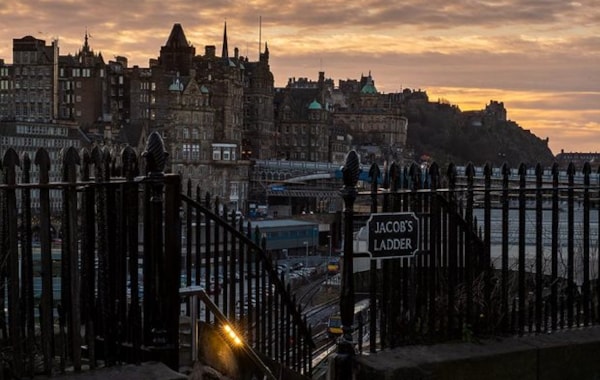 Jacob's Ladder reopens to the public

The pathway, which starts under the railway bridge on Calton Road and emerges into the light at Regent Road, first appeared on a map in 1784, though is likely to have existed as a route long before then. It was also used as a route for funeral processions from the Old Town to the old Calton Hill burying ground. There are a number of steeppaths and steps dotted around the UK that are named after the biblical Jacob’s Old Testament dream at Bethel.

The work was supported by the New Waverley Community Fund, City of Edinburgh Council, and Edinburgh World Heritage. Stonework repairs included repointing, replacing broken sections and remolding areas close to the new railings. Stonemason apprentices from St. Mary’s Cathedral Workshop were also involved in repairing the walls. New specialist equipment was used to remove the graffiti from the fragile stonework, together with environmentally-friendly chemicals. The lighting solution for the pathway has been designed to improve personal safety and eliminate any dark corners and hiding places.

Adam Wilkinson, Director of Edinburgh World Heritage said: ‘The ancient wynds and pathways of Edinburgh, each with their own stories and associations, are an important part of our rich cultural heritage. We want to encourage everyone to use these pedestrian routes, including closes, paths through burying grounds, and wynds, as they go about their daily business and perhaps explore their city a little in the process’.

Cllr Neil Gardiner, Planning Convener, added: ‘The restoration of this historic pedestrian route has made it a much more attractiveand accessible path for those enjoying the city by foot. I would encourage anyone able to manage the 140 stairs to go and check out the spectacular views and hidden stories from the past that make this such a great short cut down to the Old Town from Regent Road.

‘This project is a great example of the preservation work carried out by EdinburghWorld Heritage and I’m really pleased that we chose to support the restoration through the New Waverley Community Fund.’

QUICK LINK: Top ten castles in and around Edinburgh