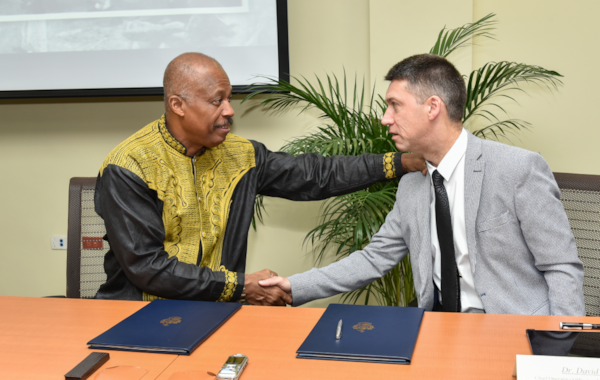 A historic Memorandum of Understanding has been signed by senior representatives of The University of Glasgow and the University of the West Indies at a ceremony held in the Mona campus of The UWI in Kingston, Jamaica.

A historic Memorandum of Understanding (MOU) has been signed by senior representatives of The University of Glasgow and the University of the West Indies at a ceremony held in the Mona campus of The UWI in Kingston, Jamaica.

The MOU is one of a series of recommendations made in a Report into Historical Slavery which the University of Glasgow published in September 2018. That report, thought to be the first of its kind in the United Kingdom, acknowledged that whilst the University of Glasgow played a leading role in the abolitionist movement in the 18th and 19th centuries, the institution did also receive significant financial support from people whose wealth derived, in part, from slavery.
Under the terms of the MOU the institutions have agreed to forge a positive academic partnership which will include the establishment of the Glasgow-Caribbean Centre for Development Research. The Centre will host events and activities, sponsor research work, coordinate academic collaborations with other universities, including The UWI, and help to raise public awareness about the history of slavery and its impact around the world.

Another commemorative signing of the MoU is scheduled at the University of Glasgow on August 23, 2019, coinciding with UNESCO’s International Day of Remembrance of the Slave Trade. It will include the unveiling of a commemorative plaque in honour of the enslaved.
QUICK LINK: Leaking dome at National Records of Scotland causes damage to records