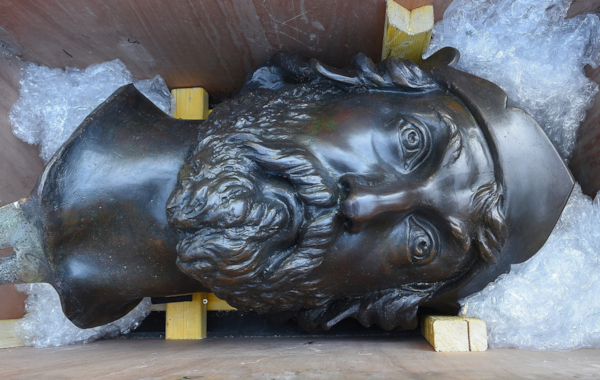 The 132-year-old William Wallace Statue has this week returned to take pride of place on the iconic National Monument in Stirling after undergoing vital restoration work.

Historic William Wallace Statue returns to National Wallace Monument after restoration Images
The bronze 14ft figure of William Wallace, which towers above the entrance to the National Wallace Monument in Stirling, has spent around 10 weeks receiving painstaking specialist repair.
Stirling Council has invested an estimated £260,000 in the project to ensure the structure is back in peak condition ahead of the Wallace Monument’s 150thanniversary celebrations in September.
The expert work has involved:
·         repairs to the structural casting failures on the statue
·         cleaning, stabilisation and re-patination of the bronze to halt decay
·         cleaning out the statue’s internals which had been originally filled with sand to stabilise the statue
·         designing and inserting a new armature (skeleton)
·         assessing and repairing the shield and sword.
The work forms part of the overall exterior restoration project at the National Wallace Monument, which is being funded by the Council and is expected to total £515,000.

After the statue was carefully removed in sections from the tower for the first time since its unveiling in 1887, Wallace travelled down south to Wigan-based firm, Lost Art, to begin the process of restoration.
Brian Roberts, Senior Manager for Infrastructure at Stirling Council, said: 'We are absolutely thrilled that the magnificent William Wallace statue has been restored to his former glory and is back home in Stirling for the upcoming National Monument’s 150th anniversary celebrations.
'The investment by the Council was critical to safeguard the future of the statue and the Monument, one of Scotland’s most popular attractions, and underlines our commitment to ensuring Stirling continues to be a must-visit destination.
“This was a hugely challenging and complex project, requiring the collaboration of a range specialists, including the expertise of the craftspeople of Lost Art, who have a proven track record in restoring Scottish historical structures.
'What happened on Wallace’s last trip to England is obviously well-known, and very much in the past but, this time, thanks to Lost Art’s painstaking work, he has returned across the border in peak condition and ready to greet visitors from all over the world as they arrive at the Monument.'

What did the work involve?

The William Wallace statue was created by renowned Edinburgh sculptor David Watson Stevenson and was added to the Monument in 1887. Prior to work commencing, specialists used the latest technology to analyse its condition, guiding how they would perform the intricate task of its removal and restoration.
This included an x-ray survey, an endoscopic survey and ultrasonic thickness-mapping. A sample was also taken of the casting bronze to identify a match for repair metal and brazing wire.
Linda Cannon, a professional stained glass artist and Icon Accredited Conservator, has also restored the stained glass window in the niche behind the statue.
Jim Mitchell, the Project Engineer and also an Accredited Conservator restorer with Icon, said of the work : 'I have led the restoration of many engineered structures throughout the UK but this is among the most culturally significant.
'It was an honour to be involved but also a challenge for me and the team, with many unknowns and not a few surprises revealed during the work, including the discovery of over a half ton of sand inside the statue.
“Work to the ornate sandstone decoration around the niche demanded the highest standard from Kelsen Technical, the enabling and logistics contractor.
“The reconstruction of the statue has included a stainless steel space-frame structure inside the body to ensure its ongoing structural integrity and a safe method of lifting the 2.5 tonnes on bronze.”
For more on the Wallace Monument, visit the website.