History of a 'forgotten' Scottish crown jewel under the spotlight 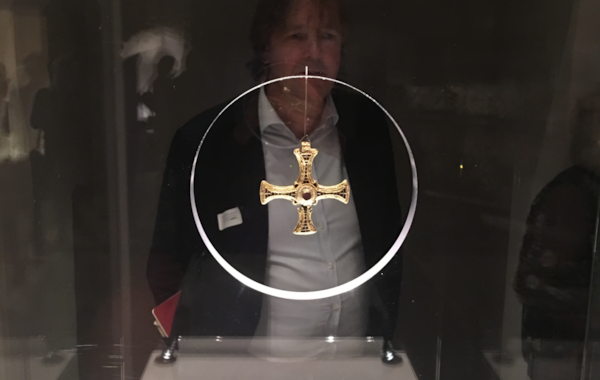 The mystery surrounding a forgotten Scottish crown jewel will be dissected by author David Willem at a talk at the National Library of Scotland.

The mystery surrounding a forgotten Scottish crown jewel will be dissected by author David Willem at a talk at the National Library of Scotland.

‘The Black Rood - rediscovering Scotland’s Anglo-Saxon crown jewel’ event will take the audience back hundreds of years to tell the story of the Black Rood and will raise the possibility that it might still exist.

What was the Black Rood?

The Black Rood of Scotland was a royal reliquary of the True Cross which once had the same status as the Stone of Destiny. Almost certainly the origin of the name Holyrood, the Black Rood was brought to Scotland in 1068 by St Margaret when she became queen to Malcolm III (read about places connected with Margaret's life here.

Captured alongside the Stone of Destiny by England’s Edward I, the Black Rood was eventually presented to Durham Cathedral where it disappeared during the Reformation.

Author David, who has just completed a book on the story, said: “This is a truly fascinating historical story which I’m excited to share with people in Scotland. The talk offers the opportunity to learn about the history of a Scottish crown jewel that was central to the country’s conception of itself and its independence for hundreds of years during the medieval period.

“I will share my experiences of researching the journey of the Black Rood and also present a theory which raises the possibility that St Cuthbert’s Cross could have been one of the reliquaries known as the Black Rood.”

David, who was invited to speak at the National Library of Scotland after winning a research slam competition, became interested in unearthing the story behind the Black Rood when researching an earlier book about St Cuthbert, his grave and his cross.

He continued: “I have never been able to understand how St Cuthbert’s Cross was found in his grave in 1827 but despite numerous exhumations and investigations over 1,000 years, no one had ever seen that cross before. A cross disappears in Durham Cathedral and a cross turns up at Durham Cathedral, both are the same kind of gold jewelled Anglo-Saxon crosses so could those two be the same?

“I don’t know the answer to this, but there is a possibility that they could be the same. I am looking forward to sharing the information I have come across with a wider audience and to start an open discussion on this fascinating piece of history,” added David.

‘The Black Rood - rediscovering Scotland’s Anglo-Saxon crown jewel’ talk will take place on 23 January at 5.30pm in the National Library of Scotland’s George IV Bridge Building. To find out more or to book a place at the free event, visit the library's website or call 0131 623 3734.

QUICK LINK: Places connected with the life of Macbeth, king of Scots