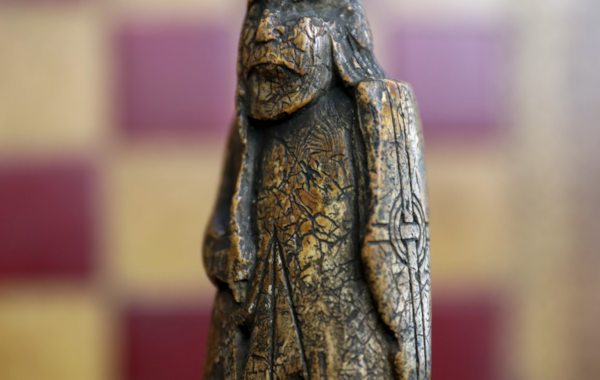 Regarded as the most famous chess pieces to have survived from the medieval world, the Lewis Chessmen secured their place in history when they were found in 1831 on the Isle of Lewis in the Outer Hebrides. The remarkable hoard constituted the greatest ever discovery of medieval chess pieces.

Acquired for £5 in 1964 by an antiques dealer in Edinburgh and passed down the same family by descent, the ‘new’ Lewis Warder was offered with an estimate of £600,000-£1,000,000 in the Old Master Sculpture & Works of Art sale. Its appearance marked the first time that one of the chessmen had ever come up for sale at auction.

A family spokesperson said at the time: “My grandfather was an antiques dealer based in Edinburgh, and in 1964 he purchased an ivory chessman from another Edinburgh dealer. It was catalogued in his purchase ledger that he had bought an ‘Antique Walrus Tusk Warrior Chessman’. From this description it can be assumed that he was unaware he had purchased an important historic artefact. It was stored away in his home and then when my grandfather died my mother inherited the chess piece.

“My mother was very fond of the Chessman as she admired its intricacy and quirkiness. She believed that it was special and thought perhaps it could even have had some magical significance. For many years it resided in a drawer in her home where it had been carefully wrapped in a small bag. From time to time, she would remove the chess piece from the drawer in order to appreciate its uniqueness.”

The warders that made up the hoard are of two types: the majority are bearded with a sword in their right hand and shields either at their left side or in front, and three are shown biting the tops of their shields, identifying them as the legendary Norse warriors known as berserkers. The new Lewis Warder is completely consistent not only with his fellow warders but also with the surviving group as a whole.

The origins of the Lewis chessmen

Scholars have proposed competing theories on the origins of the Lewis Chessmen, their style and iconography not restricted to one centre. The leading theory is that they are Norwegian, and more precisely probably from Trondheim, which seems to have specialised during the 12th and 13th centuries in carving gaming pieces, often from walrus ivory. Trondheim was the seat of the archbishop of Norway, with the island of Lewis under its authority as part of the kingdom of Norway from early Viking times up to the Treaty of Perth in 1266.

The theory that the Lewis hoard was the stock of a trader in chess pieces buried after a shipwreck was first proposed by Frederic Madden and has been the favoured explanation of their discovery ever since. The good condition of the individual pieces and their apparent lack of wear supports the theory that they were the stock of a trader in chessmen that never reached their market.

Alexander Kader, Sotheby’s Co-Worldwide Head of European Sculpture & Works of Art, said: “With fond memories from my childhood of the brilliantly animated television series that paid full tribute to the inspiration of the Lewis hoard, this is one of the most exciting and personal rediscoveries to have been made during my career. Today all the chessmen are a pale ivory colour, but the new Lewis Warder’s dark tone clearly has the potential to offer valuable and fresh insight into how other Lewis chessmen may have looked in the past. There is certainly more to the story of this warder still to be told, about his life over the last 188 years since he was separated from his fellow chessmen, and just as interesting, about the next chapter in his journey now that he has been rediscovered.”

A Lewis Chessman, A Warder