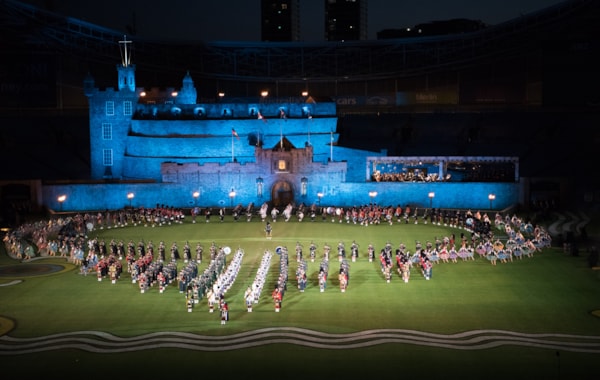 A life-sized Edinburgh Castle formed the backdrop to The Royal Edinburgh Military Tattoo's performances in Sydney.

Over 1,500 performers taking part in The Royal Edinburgh Military Tattoo have officially marched out of Sydney following huge plaudits from Australian audiences.

The Tattoo marked its return to Australia with the biggest cast ever in its 69-year history, joining with more than hundreds of performers from home soil in Australia.

Amongst the line-up for the four show extravaganza was 14 nations from across the world, involving military and civilian performers, including Papua New Guinea, France, Cook Islands, Solomon Islands, Switzerland and the UK.

The Tattoo theme for Sydney was ‘At All Points of the Compass’ which was centred around a bold design on the field of play, inspired by Indigenous art and the constellation of the Southern Cross, used by travellers to navigate in the southern hemisphere. Through their colourful performances, each act has taken the audience on a full circle around Australia, honing in on Australia’s place in the world, while celebrating the heritage and traditions of the participating nations.

The Royal Edinburgh Military Tattoo Chief Executive and Producer, Brigadier David Allfrey MBE, said: "Sydney has been an outstanding City in which to host this landmark Show. Everything about this production has been extraordinary. This Tattoo has been nearly three years in the planning, it has been designed to place Australia and her heritage at the heart of an extravaganza, with a cast of close to 1,600 and technical support beyond anything we have brought together before.

“We have been so well supported by the Australian Defence Force – who have helped, amongst so many other things, to gather in all of the Pacific nations cast  – and our partners have spared no energy or skill to reach the audience and do the heavy-lifting in the production. Above all, we have been privileged to use one of the world’s most iconic venues and we have been touched by the warm responses from the audiences, many of whom have travelled huge distances to be with us. Thank you, Australia!”

For more on the Royal Edinburgh Military Tattoo, visit its website.