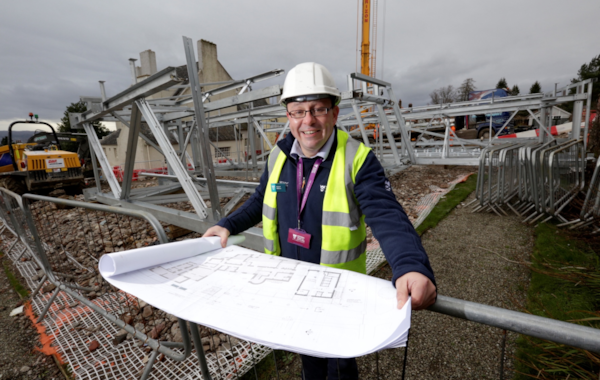 Richard Williams, General Manager for Glasgow and West at the National Trust for Scotland with steel beams at The Hill House which arrived this morning (Mon Jan 21)

Steel beams have today been craned into place to form a 'box' at The Hill House in Helensburgh, as work begins to allow the iconic building to dry out after years of disintegration.

Steel beams have today been craned into place to form a 'box' at The Hill House in Helensburgh, as work begins to allow the iconic building to dry out after years of disintegration.

The ‘Box’ is part of the National Trust for Scotland’s plan to save The Hill House, Charles Rennie Mackintosh’s domestic masterpiece. Preliminary sitework began in November 2018, with two months of preparation for the installation of the steel frame of the structure.

Once the frame is complete, the Helensburgh landmark will be surrounded by a fine perforated mesh, designed by architects Carmody Groarke.

Since it was built over a century ago, The Hill House has been absorbing the rain, putting the building and its unique interiors at risk. The semi-permanent enclosure will provide shelter to The Hill House, letting it dry out after years of disintegration and allowing for further conservation work to take place.

See The Hill House from a new perspective

As well as protecting the building from the weather, the ‘Box’ will give visitors the chance to get a new perspective on The Hill House from elevated walkways looping around the building, and to see conservation work in action.

The house and gardens will be closed to the public during the construction of the ‘Box’ -  being carried out by Robertson - but are expected to reopen in late spring this year.

Richard Williams, General Manager for Glasgow and West at the National Trust for Scotland, said: “Seeing the box take shape is an extraordinary feeling and a significant milestone in our charity’s rescue effort to save The Hill House. After years of planning we can really start to see the scale of what we’re doing here, for the love of the building and where it stands in the history of Scottish architecture.”

Thousands of people have already donated to the charity’s Box the Hill House campaign which launched in February 2018. So far £1.2 million has been raised, with fundraising continuing for the final £300,000 of the target.

Donations to the appeal can be made online.

QUICK LINK: The best things to do in Glasgow