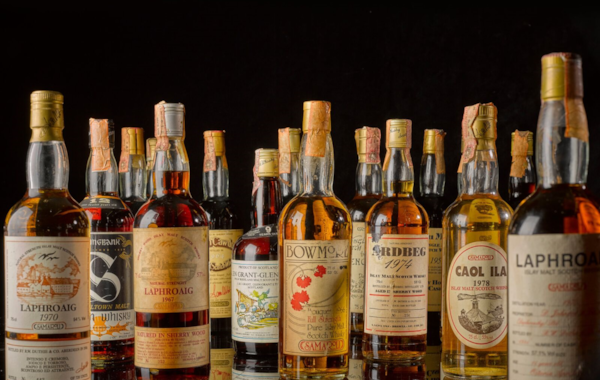 The 'ultimate whisky collection' including a Macallan 1926 described as the 'holy grail' of whisky is to go to auction next month, with an estimate of £4 million.

The 'ultimate whisky collection' including a Macallan 1926 described as the 'holy grail' of whisky is to go to auction next month, with an estimate of £4 million.

The Ultimate Whisky Collection from Sotheby's is described by the auction house as the most valuable collection of whisky ever to be sold at auction, and the company’s first single-owner offering of spirits.

Showcasing the most comprehensive range of desirable Scotch whisky to come to the market from a private ‘cellar’, the collection is estimated to bring in the region of £4 million ($4.8 million).

History of the collection

The Ultimate Whisky Collection is defined by its strong representation of The Macallan bottlings. Comprising half of the lots in the sale and with a combined estimated value in excess of £2.2 million, this is the most comprehensive collection of the Macallan Fine and Rare series ever offered at auction.

The line-up is headed by the originally-labelled 60 years old The Macallan 1926 from cask #263. Cask 263 yielded only 40 bottles, considered the ‘holy grail’ of whiskies; 12 bottles were labelled by Peter Blake, 12 by Valerio Adami, and two bottles were sold individually and given private labels, one of which was hand-painted by Irish artist Michael Dillon. The remaining 14 were bottled as the anchor for the Fine and Rare series and labelled as such, making them the oldest bottles in the iconic ‘Fine and Rare’ series, both by age and by vintage.

Do you love Scotland's history? Sign up for our free newsletter for lots more!

In the last two years, three versions containing liquid from Cask 263 have all broken records at auction, but the fourth bottling from this cask has not been seen at auction for over a decade. The Macallan 60 Years Old, Fine & Rare Series is the only bottle required to complete both the full collections of bottlings from cask 263 and the Fine and Rare vertical, a series to which The Macallan is continuing to add releases annually.

The sale will open for online bidding on 27 September 2019 and culminate in a live auction on 24 October at the Olympia event space in West Kensington, London. Details will be posted on the Sotheby's website before online bidding opens.

(report and images courtesy of Sotheby's)