New research reveals the secret of who owned the Galloway Hoard 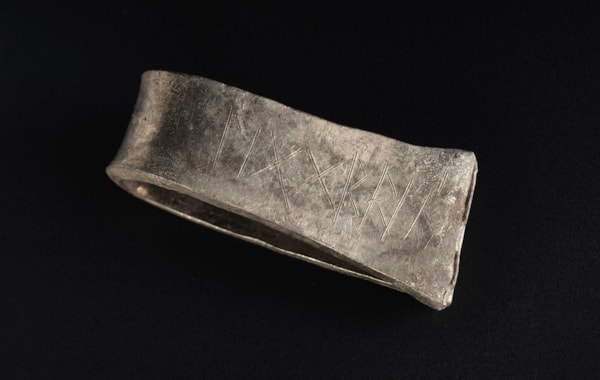 New research into the Galloway Hoard has uncovered the name of one of the famous treasure’s original owners, over 1,000 years ago.

Examination of Anglo-Saxon runic inscriptions on the Hoard’s silver arm-rings have revealed the name “Ecgbeorht” or, in its more modern form, Egbert.

“It’s really exciting to be able to reveal the first major research finding from the conservation of the Galloway Hoard, a message left by one of the individuals who deposited the hoard 1,100 years ago.

"We don’t know any more about Egbert than his name right now but there’s something really tantalising about connecting the Galloway Hoard with a named person. Egbert is a common Anglo-Saxon name, and with more research on the rest of the contents of the hoard, we will be able to narrow down its dating and suggest some candidates from the historical record.

"If the hoard belonged to a person or group of Anglo-Saxon speakers, does it mean they were out raiding with other Vikings? Or that these Viking hoards were not always the product of Scandinavian raiders? There are other explanations, but either way this transforms our thinking on the ‘Viking Age’ in Scotland.

"These inscriptions are evidence that identity was complex in the past, just as it can be today. In Early Medieval Scotland, we have inscriptions in five different scripts (Latin, ogham, Pictish symbols, Scandinavian and Anglian runes) making it a diverse and multilingual era. Place-names in British, Gaelic, Norse and Old English were being coined in South West Scotland around the time of the Galloway Hoard.  The sea was more like a motorway, allowing people to communicate across linguistic boundaries, exchanging ideas and objects. This is just a glimpse of how the Galloway Hoard will continue to challenge our thinking as conservation continues.”

The runes were read by Dr David Parsons of the University of Wales, who said: “Five of the silver arm-rings have runic inscriptions scratched into them which may have functioned as labels identifying distinct portions of the hoard, perhaps recording the names of the people who owned and buried them. Arm-rings of this sort are most commonly associated with Viking discoveries around the Irish Sea coastlands. Yet these runes are not of the familiar Scandinavian variety common around this date on the nearby Isle of Man, but of a distinctively Anglo-Saxon type. And while several of the texts are abbreviated and uncertain, one is splendidly clear: it reads Ecgbeorht, Egbert, a common and thoroughly Anglo-Saxon man’s name.

"There is some reason, therefore, to suspect that the Galloway ‘Viking’Hoard may have been deposited by a people who, to judge by name and choice of script, may have considered themselves part of the English-speaking world. It is even possible that these were locals: Galloway had been part of Anglo-Saxon Northumbria since the early eighth century, and was referred to as the ‘Saxon coast’ in the Irish chronicles as late as the tenth century.”

Dr Parsons will be discussing the findings along with other surviving early medieval inscriptions from south-west Scotland in ‘The Riddle of the Runes’, the 17th annual Whithorn Lecture at the Wigtown Book Festival on Saturday 5 October.

As well as the arm-ring with the full name of Egbert, four others have runic inscriptions. Three appear to be abbreviated names, probably also Old English, whilst the fifth has still to be deciphered, but all are in Anglo-Saxon runes.

The Galloway Hoard brings together the richest collection of rare and unique Viking-age objects ever found in Britain or Ireland. It is of international significance and will transform our understanding of this period of Scottish history. Buried at the beginning of the tenth century, it comprises in excess of 100 gold, silver and other items, some of which are unique.

The Hoard was discovered in 2014.  Following its acquisition by National Museums Scotland in 2017, the Hoard is currently being conserved and researched at the National Museums Collection Centre in Edinburgh.

An exhibition of the Galloway Hoard will be displayed at the National Museum of Scotland in May, and will tour thereafter to Kirkcudbright Galleries, The McManus: Dundee’s Art Gallery and Museum and Aberdeen Art Gallery thanks to funding from the Scottish Government.

Following the tour part of the Galloway Hoard will be on long-term display at the National Museum of Scotland in Edinburgh with a significant and representative portion of the Hoard also displayed long-term at Kirkcudbright Galleries.

QUICK LINK: The Romans in Scotland