Outlander digital guide – the facts behind the fiction, from the publishers of History Scotland 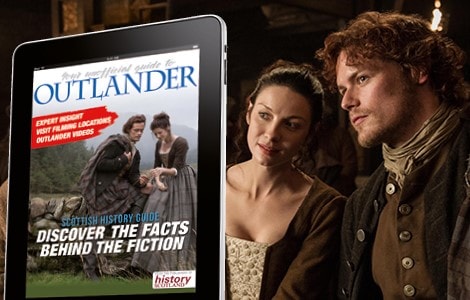 History Scotland has announced the release of a new unofficial digital guide to the Outlander TV series, which allows fans of the show to explore the real-life history behind Diana Gabaldon’s fictional time travel tale.

History Scotland has announced the release of a new unofficial digital guide to the Outlander TV series, which allows fans of the show to explore the real-life history behind Diana Gabaldon’s fictional time travel tale.

Ahead of the premiere of season three of the show, this digital guide tells the real story of the Jacobites and their fight for the crown, looks at the history of key buildings featured in the series, and offers plenty of ideas for creating your own Outlander-inspired history tour.

‘Like many heritage organisations around Scotland, we have been heartened by the so-called “Outlander effect” which has seen thousands of people who might otherwise have known little about the country’s history begin to discover the country’s past in depth.

‘This digital guide uses the fictional Outlander story as a framework for exploring the Jacobite period, which was rich in drama, intrigue and political manoeuvring. Our research has shown that many fans of the show have a real hunger to find out the history behind the buildings they’ve seen on screen, and the fictional happenings played out in each episode. Our new guide is a great way to find out more about Scotland in the eighteenth century – and this period of history is every bit as exciting as anything you’ve seen on screen.’