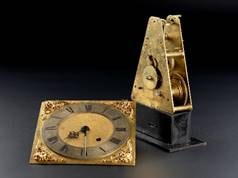 A historic sea clock that played an important role in the long quest for a practical way of determining longitude at sea has been acquired by National Museums Scotland.

A historic sea clock that played an important role in the long quest for a practical way of determining longitude at sea has been acquired by National Museums Scotland.

Made in 1662, it is one of only two such clocks which survive today, and represents the first attempt to establish longitude at sea with a purpose-made mechanical timepiece, nearly 100 years before this was famously achieved by John Harrison.

The clock is one of only two surviving mechanisms from this pioneering – but ultimately unsuccessful – attempt to determine longitude at sea by means of a timepiece; a quest which has long captured the public imagination. The ‘longitude problem’ is famous as an exemplar of scientific endeavour with a truly global effect, however the early Scottish contribution is less well-known.

Alexander Bruce, Earl of Kincardine commissioned the mechanism for this clock from the Dutch maker Severyn Oosterwijck in 1662. Bruce lived in the Netherlands as part of the Stuart court in exile and was one of the founder members of the Royal Society. This Scottish-Dutch collaboration continued for several years, though it was ultimately abandoned as an unsuccessful attempt at solving the longitude problem.

The Dutch mathematician and astronomer Christiaan Huygens (1629–95) invented the first practical pendulum clock in 1656 before turning his attention to the creation of an accurate sea-clock for the determination of longitude.

He collaborated with Bruce on the project, with the Scot introducing a number of new features to Huygens’ designs before having four sea-clocks made, two of them by Severyn Oosterwijck.

However these reports eventually proved to be inaccurate and despite the optimism of the 1660s and extensive discussions over patents and profits, the new marine timekeepers turned out not to be the solution that had been hoped for. It was another century before the English clockmaker John Harrison would famously solve the longitude problem.

The Bruce-Oosterwijck longitude pendulum sea clock will go on permanent display in the Earth in Space gallery at the National Museum of Scotland.

Sir Peter Luff, Chair of National Heritage Memorial Fund said: “As one of the earliest surviving scientific instruments designed by a Scot, the Bruce-Oosterwijck clock is of outstanding importance to the history of science in Scotland. Not only is it an incredibly rare survival, it also brings Scottish scientific endeavour back into the longitude story. It is wonderful news that the clock will go on display at the National Museum of Scotland giving the public an opportunity to appreciate its importance in that story.”

The acquisition has been made possible with a grant of £36,000 from the National Heritage Memorial Fund (NHMF) and £15,000 from Art Fund. The clock was purchased with the assistance of the fine art auctioneer Dreweatts 1759.

For more on the National Museum of Scotland, visit their website.